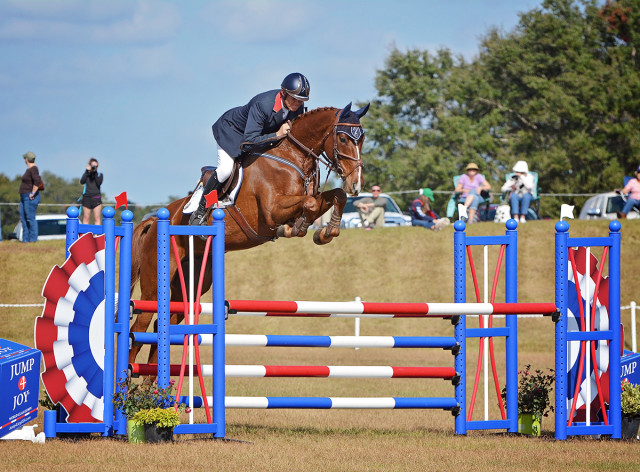 One of my favorite things about covering events for EN is keeping an eye out for exciting, young, up-and-coming horses. Leslie Law and Fernhill Divergent, a 6-year-old KWPN gelding (Affelay X Zakilly, by Odermus) owned by Julie Richards and Carol Gee, certainly turned heads during Sunday’s CCI* show jumping at the inaugural Ocala Jockey Club International Three-Day Event. This one has scope for days!

Leslie temporarily has the ride on Fernhill Divergent while Julie mends following her fall at the Dutta Corp Fair Hill International CCI3* in October, and Leslie gave the horse an excellent ride in his one-star debut to finish in second place on their dressage score of 44.6. We’re wishing a very speedy recovery to Julie and look forward to seeing her back in the tack aboard this lovely young horse.

Top Australian eventer Megan Jones has been sidelined with a serious concussion and broken ribs after her three-star horse Kirby Park Invader slipped and fell during a gallop at her base in South Australia. Megan said she is grateful “Freckles” was not injured in the fall. [Top eventer out of action with head injury]

There’s still time to register for next week’s USEA Convention & Annual Meeting, which will be held Dec. 7-11 in Fort Lauderdale, Florida. The schedule is packed with educational sessions and moments you don’t want to miss, like William Fox-Pitt’s keynote address. Did we mention the convention hotel is just one block from the beach? [USEA Convention Highlights You Won’t Want to Miss]

Have you been listening to the new Eventing Podcast? It’s the brainchild of EquiRatings co-founders Sam Watson and Diarm Byrne, along with the delightful Nicole Brown, who you might have heard commentate for Event Rider Masters. I’ve joined in on the podcast team as well, and our latest interview is with the USA’s own Lauren Kieffer. You can subscribe to the podcast on iTunes and Soundcloud. [#LockerRoomTalk: Lauren Kieffer]

How cool is it that we had Rio team gold medalist and individual silver medalist, Astier Nicolas, competing at the Ocala Jockey Club this past weekend? He catch-rode FE Ophelia in the CCI*, and you can watch a video of his show jumping round thanks to our friendly neighborhood videographer David Frechette. Click over to YouTube for more videos from #OJCInternational.