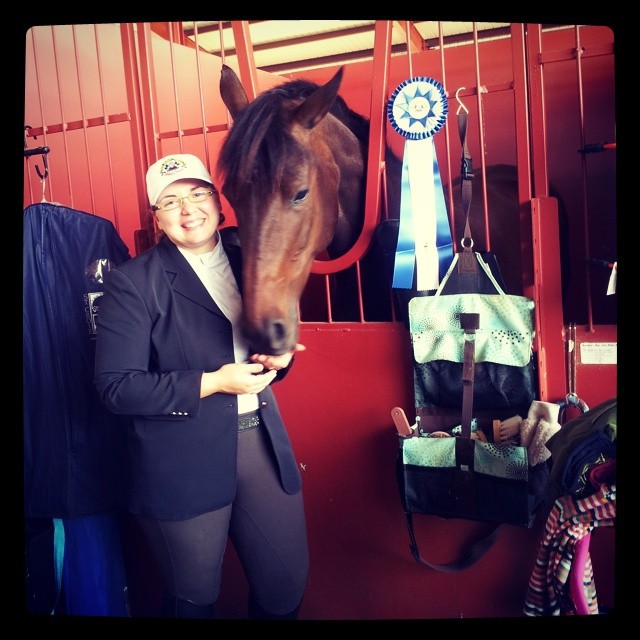 I had a blast at Roebke’s Run Horse Trials over the weekend! While my gelding Onyx decidedly did not care for cross-country on Sunday (resulting in a whoopsy-daisy unplanned dismount at our first fence), I had a fun and valuable experience that weekend, from watching the CIC* and CIC** riders strut their stuff to being coached by the indomitable Ralph Hill. It was my first time at the Schweiss family’s Magister Equitum Stables in Hector, Minn., and I had a difficult time keeping my jaw from scraping the ground when I saw the gorgeous facilities and grounds. The staff, volunteers, and my fellow competitors were all friendly and helpful, staying upbeat through the torrential downpour on Saturday. Fortunately, we were rewarded with picture-perfect weather on Sunday for Captain Mark Phillips’ beautiful and challenging cross-country course.

My fellow Woodloch Stable rider, Lexie Baldwin, placed first in the Novice Rider division; here’s an adorable photo of her and her Connemara-Thoroughbred mare, Cedar’s Sonata, enjoying their victory. Congratulations, Lexie and “Snotty”! Congratulations to all competitors, and a huge thank you to the hosts, organizers, and volunteers at this spectacular event!

Burro predicted Germany’s World Cup win: Cisco, a burro living at Texas’ El Paso Zoo, was given two footballs – one with Argentina’s flag colors and the other representing Germany’s flag – as part of his enrichment. By choosing to play with the German ball, Cisco was said to have “chosen” the winner of yesterday’s World Cup finals game. Good job, Cisco! [Horsetalk]

Proposed bill gives states jurisdiction over wild horses: A Utah congressman introduced a bill that would give states and Native American tribes “the option to assume management of wild horses and burros residing within their borders.” The Wild Horse Oversight Act of 2014, which remains pending, would allow states to manage wild horse herds while still upholding the federal Wild Free-Roaming Horse and Burro Act of 1971. [The Horse]

Speaking of wild horses… Researchers have hypothesized that traits associated with domestication, such as long ears and large patches of white fur, can be attributed to a group of embryonic stem cells called the neural crest. The neural crest is thought to affect pigment cells, bone and teeth growth, brain development, and the adrenal glands. This could explain my gray gelding’s long, floppy ears and laid-back attitude to a T! [Horsetalk]

Video of the Day: Here’s Area IV’s very own Liz Lund and her 2008 OTTB Flash Mob, aka “Roxy” at Roebke’s Run over the weekend! Go, girls!