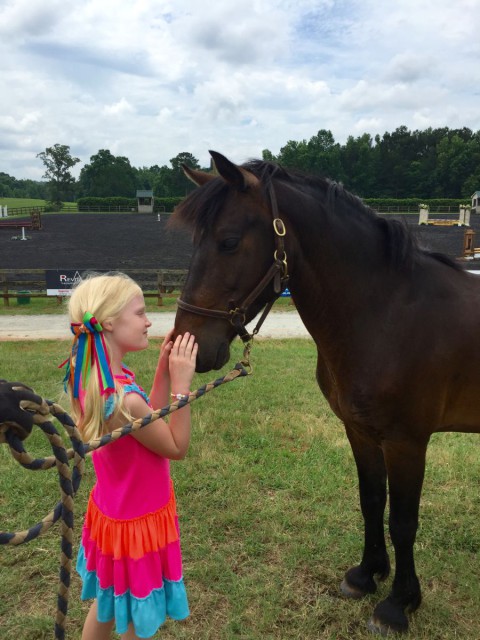 Werner and Marjolein Geven, professional riders and trainers based at Poplar Place Farm in Georgia, had long been searching for their daughter Tessa’s next perfect pony without success when a friend told them of a nice Connemara in need of a good home. The very same day they drove to meet him and instantly knew he was the one. He had a nice presence, sweet face and calm eye in addition to an uphill build and good head carriage.

“We drove up the driveway, saw him standing in a field and I said, ‘oh honey we’re in trouble! I like him already!’” Werner said. “I walked in the field with a little treat in my pocket. He came up and took the treat then ran off. The next day we came with the trailer.”

However Tullymor’s Houdini, a registered Connemara, had been previously rescued from a neglectful situation and so came with some baggage from his former life. With good care and a lot of patience, the Gevens along with their student Lily Barlow gained “Samson’s” trust and he is now repaying them tenfold.

In the beginning, “Samson” was obviously a very sweet pony with whom someone had done a lot of ground work, but he was petrified of having a saddle on his back and took hours to catch in the field. He also carries physical scars from being bullied by former pasture mates.

Werner knew that Samson’s behavior was not naughtiness, but a fear response. So the Gevens started over, showing Samson that life is good, riding is fun and no one would hurt him. 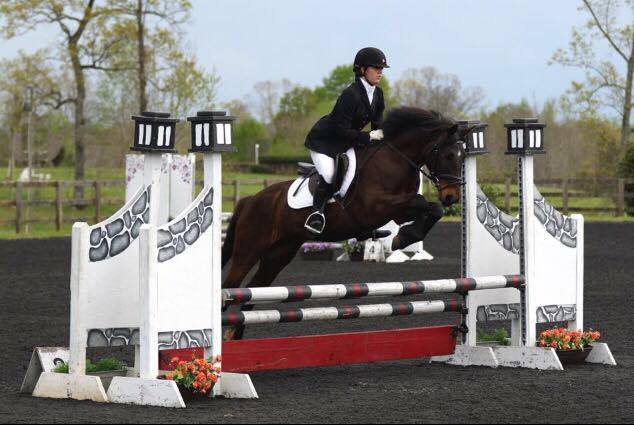 First Samson learned to simply wear a saddle. They would put it on him every day and let him just hang out and munch on hay until he was comfortable wearing tack. Later, Lily would get on and off, over and over, with someone at his head walking him quietly in circles.

“It took a while. He was very much like a very unbroke 3-year-old,” Marjolein said. “Now he’s a quiet pony. He’s not a hot pony but there is still some fear. You can tell he’s been bullied and doesn’t like to be crowded. He doesn’t buck or rear, he just wants to escape.”

Lily has done most of the riding and competing with 14.1-hand Samson while Werner coaches them. “It has been so special that Tessa is riding Lily’s previous pony Dinky, and now Lily is training her next pony too. She has done an amazing job!” Marjolein said. “Once he trusts the rider he wants to please them. When you’re riding him by yourself he gives you all he has.”

“He tries very hard,” Lily agreed. “Once he understands he has no problem.”

The Gevens started taking Samson everywhere to get exposed to new environments and learn to cope with nervousness. At home, they played games to build his confidence and get used to objects and movements that frightened him. Under saddle, he was a natural when they started him over fences, and his good movement regularly earns him scores in the 20s in dressage. Now that he is well schooled and more confident, Tessa is getting to know her new partner. 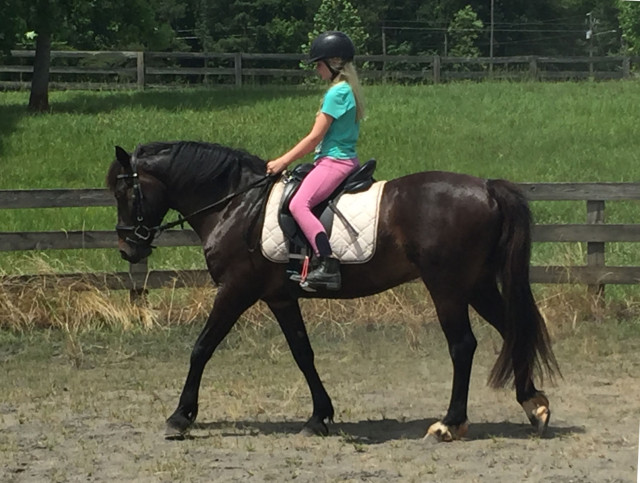 “He’s super, but Tessa has to figure out how to deal with him without getting nervous herself,” Werner said. In this regard, Tessa is showing great promise.

In their first show together, Samson bolted after the judge had wrung the bell. They quickly realized that Samson was spooking at  Tessa’s oversized hair ribbons flapping above him. With the offending ornaments hastily removed, Tessa turned and trotted straight into the arena to compete. With that kind of determination, Tessa and Samson will surely make a great pair.

“I thought she would cry and get off, but she went in and rode a great test,” Marjolein said. “She still needs to be made aware that she can’t ride him like Dinky, like throwing the reins down to hug him. She doesn’t know it can scare the pony.”

In the coming months Tessa will continue to ride Dinky, gaining confidence and valuable experience through Pony Club and schooling shows. Meanwhile she and Samson will work on dressage and forming a bond based on trust. And while young Tessa learns about the nuances of horsemanship, Samson is able to give back to the family that gave him a second chance.

In his first year of eventing, Samson has won six horse trials, placed seventh at the USEA American Eventing Championships and will finish in the top 10 on the 2016 USEA Beginner Novice Leaderboard. The Gevens finally found Tessa’s perfect new pony, and Samson got a new lease on life. This time, everybody wins.