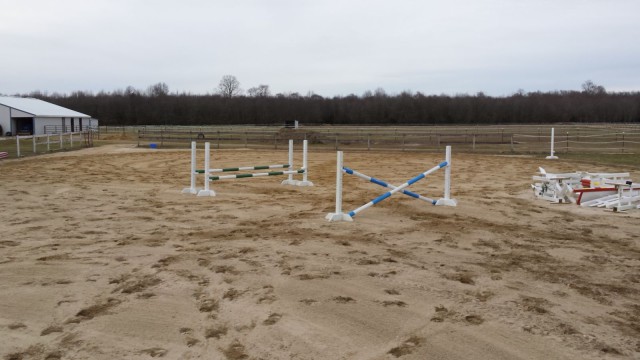 So much to learn from just two jumps. Photo by Holly Covey.

Just two jumps. The arena has finally dried up enough to jump, and quickly, fighting against the dark, I pulled some standards and poles from the nearby stack and set up a gymnastic. A cross rail in, what appeared to be about 19 feet to a low offset oxer. No groundlines — no time to pull more poles from the frozen stack — good to go.

After almost two weeks without being able to do much riding at all, I was getting rusty. And in the winter, when the arena is even halfway approaching good, I know I’d better take advantage and do a little jumping. So once in the tack, and warmed up, hacking around looking at my very quick setup, it did look a little tight in there. And I need to angle the X in order to warm-up over a single fence.

So just this little two jump exercise was already starting with a straightness exercise — how to get to the single X for warm-up and land straight. Guess what? That proved to be a very good warm-up, especially since neither of us had jumped in a while.

If he bulged left, which is his go-to evasion, then he found himself on the high side of the X, and because it was on the diagonal, there was little room for a left turn if he cut in. To the right, the turn was easier, but that’s not his favorite lead.

So there! Tiny exercise — first warm-up jumps and two problems plus straightness worked on. Next, trotting down through it. I knew it was going to require a compact stride in the middle, so I trotted in under-powered. This horse has a good stride but is still learning, so I expected him to jump in, take a normal stride, figure out it was deep, and be smarter the second time through.

When we left the ground enthusiastically early for the X, I remember thinking, yep, there is a reason that my Coach says keep your leg on. It’s not to go Fffffaaaaaassssttterrrrrr!! Yikes! Yes, we ate the oxer.  And landed bucking because I got a little in the rumble seat trying to stay with him. I know he always overjumps the first time through something.

So the next time, instead of under-powering and not providing enough direction, I kept my leg on but half halted in front of the fence and said, ‘whoa’. I got a response, and the horse figured the stride was shorter inside the gymnastic, but he still overjumped the oxer, bucked on landing, ended up against the fence. Whoa!

So it’s going to be like this, I remembered thinking. A fine line between not enough and too much. And that comes down to me. I need to get my body more reactive and I need to think more about how to help this horse without being just a passenger here. What do I want from this exercise? What is it I expect him to do?

I want him to relax. I want him to read the distance and make the decision and the jump. If it is short, I expect, after once through, for him to remember that and adjust. With or without me. But you know, he’s just a horse. He needs my help here.

So third, fourth, and fifth trips through, I carefully watched what I was doing. Where was my leg, my body, my seat — on approach, in the air, on landing? No bucking if I keep in two point. Straight when I keep both hands even and don’t pull on his mouth. Right amount of impulsion when leg is on just enough – not too much and not “nothing”. All he’s asking for is a little support. It’s my job to give it.

And my goal — seeking relaxation — easily slipped into the equation and stayed for a while. And my other goal, asking him to learn, that too became a subtle part of what I was doing by the fifth try, without me even noticing, because I was working on ME.

So here’s my many lessons from just two jumps. It comes down to me, not my horse, not the impending evening darkness, not the time crunch, not the lack of jumping practice…just me in my own mind learning to ride better, every day, every horse, every jump. Two jumps.