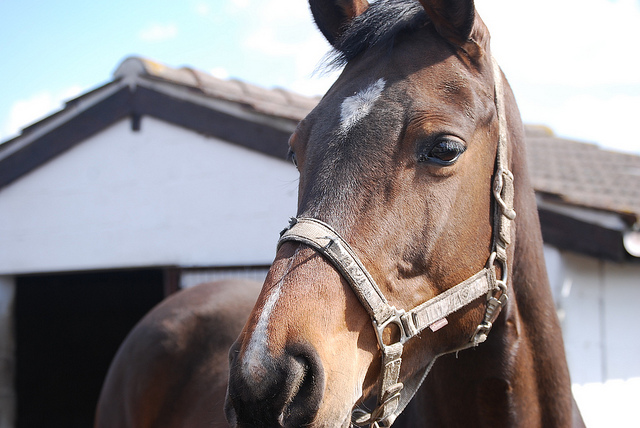 By now you’ve learned what Lyme disease is in Part I and how it’s diagnosed in Part II, but now it’s time to learn about treatment options. Dr. Joyce Harman’s Lyme disease series continues.

This is the part where we wish we had a magic bullet, but there is not one, at least not as I have found. The best approach is a multi-systemic one, using the best of all worlds: conventional, complementary and alternative. Most of the good human Lyme practitioners use antibiotics along with many immune supplements. The real key to treating Lyme is to help the immune system be as strong as possible, not just during the immediate treatment but over the long term. Due to Lyme’s ability to recur, the immune system must be ready to go to work at a moment’s notice.

Part of the difficulty in treating Lyme disease is that the bug selectively adapts to the individual’s body, so what works well in one horse may or may not work as well in another.

In the acute stages and generally upon initial diagnosis, I use antibiotics. Doxycycline is administered orally; consequently it is generally the starting point. Intravenous tetracycline does have research to prove that it works better than doxycycline, though clinically many horses seem to respond quite well to the doxy. The management issues with long-term intravenous therapy can be difficult in many situations. If management allows, it can be beneficial to start directly with intravenous treatment.

If doxycycline is used, the dose is about 10 mg/kg (50-55 100mg human tablets per 1200 lb horse) given twice a day. The idea behind any antibiotic use is to have the greatest effect at one time. Lower doses allow the spirochete to adapt and become resistant. If the horse responds well before 30 days, then doxycycline is all we use. After 30 days if the response is mediocre or not as good as we want, my preference is to go straight to the intravenous tetracycline treatment if at all possible. There are many specific protocols, and I do not think there is one that is significantly better than any other.

The use of antibiotics does suppress the immune system in the gut particularly, and from a Chinese perspective, damages the spleen and stomach due to the cold energy. So the rest of the treatment is designed to counteract those issues.

Horses presented in the later stages or those that have recurrences, despite antibiotic usage, are generally treated with herbal medicine and homeopathics preferentially.

Probiotics are an absolute necessity. There is certainly controversy about the timing of the probiotics, and there are many conventional practitioners who feel probiotics should not be given until after the antibiotics are finished. However, the only bug we are concerned about killing with antibiotics is the spirochete. Most other bacterial species are valuable assets. The antibiotics may very well kill off some of our probiotics, but that is why I will continue probiotics for several to many months after any antibiotic therapy is finished. ProBi from Advanced Biological Concepts and Digest Plus from Hilton Herbs are my probiotics of choice and often I will use them together for several months as they have different methods of action in the body.

I like to also support the immune system during treatment. Fortunately, a few compounds are relatively inexpensive and can be quite helpful. Vitamin C is one such compound: it is readily available in bulk form and palatable. Vitamin C is well known for its action in collagen, which is one of the tissues particularly damaged by the spirochete. Camu camu (Myrciaria dubia) is an excellent source of natural vitamin C. Vitamin C mixed with bioflavonoids and quercetin is also a good source (Equilite).

Noni (Morinda citrifolia) is another good immune supporting option, and it contains many antibacterial, antifungal and anti-inflammatory compounds. Studies have shown it is particularly effective for many forms of arthritis and is also a very good immune regulator. In the fruit leather or powdered form it is relatively inexpensive, while in the juice form it can be quite expensive and contains a significant amount of sugar.

Omega-3 fatty acids are anti-inflammatory as well as supportive to the immune system. They can be obtained through feeding whole flaxseed (inexpensive), naturally stabilized ground flax, hemp seeds or Chia seeds (a very stable source of Omega 3s). Flax or hemp oils can be used; however, they must be refrigerated during warm or hot weather. Three to six ounces twice a day can be used with the seeds; less volume with the oils.

Medicinal mushrooms have excellent research showing their positive effects on the immune system with polysaccharides, glycoproteins and anti-inflammatory compounds. There is also evidence they are beneficial in various arthritic conditions. They tend to be more expensive to use; however their immune modulating properties make them a beneficial addition. They are safe and can be used over a long term in a tincture or powder. One common formula used in this practice is a mixture of equal proportions of Cordyceps (Cordyceps sinensis), Reishi (Ganoderma lucidum), Maitake (Grifola frondosa), Shiitake (Lentinula edodes) and Turkey Tail (Trametes versicolor) (Mush™).

Glutathione is a powerful antioxidant present in every cell. It is particularly important in the liver and has some direct anti-inflammatory effects in arthritis. Precursors such as Alpha Lipoic Acid or N-Acetyl cysteine can also be used as well as some new glutathione products.

Supplements to support joint health are important for any horse that has shown signs of joint-related discomfort. These include glucosamine-based supplements, hyaluronic acid, glycosaminoglycans, and green-lipped mussels among others. Western herbal anti-inflammatories can also be used. Chinese herbal arthritis formulas based on the imbalances shown can also be useful, particularly alternating with some of the active Lyme herbs as discussed above. If an herbal formula being used as a primary Lyme treatment, general joint support is better done through nutritional supplementation to avoid an overload of herbs.

Stay tuned for Part IV, where we’ll delve deeper into the later stages of treatment.

Attend Dr. Joyce’s Lyme disease webinar on Wednesday, May 25! Click here for more details and to sign up: the webinar will run from 8 p.m. to 9 p.m. EST. Replays will also be available.

About Joyce Harman: Dr. Joyce Harman opened Harmany Equine Clinic, Ltd in 1990, bringing holistic healing to horses from all walks of life, backyard retirees to Olympic competitors. Over the years, Dr. Joyce Harman has observed and adapted to the changing needs the industry. Twenty-plus years ago, no one had heard of Lyme disease or Insulin Resistance, yet today that makes up a large part of her clinical practice.

In 2001, she wrote the first paper in a peer-reviewed journal about the possibility that horses have insulin resistance (IR), and now it is part of our every day conversation. In 2004 she published the first comprehensive book on English saddle fitting since the 1800’s, with the western version of the book following in 2006. To this date, these books are the only books written by an author who is independent from a saddle company, which brings unbiased information to the horse world.

In 2015, Dr. Harman released the Harmany Muzzle, a customizable and breathable grazing muzzle designed with the horse in mind. Because she deals extensively with metabolic and insulin resistant horses, she felt it was her duty to offer them a comfortable muzzle option.