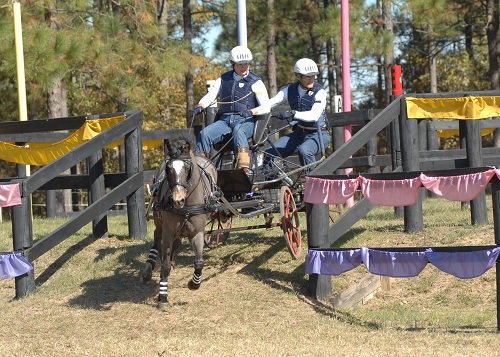 Combined Driving, Eventing's Sister Sport. Photo by Pics of You

I love ponies.  Ponies are wonderful, especially for short adult Eventers like myself.  As a lifetime member of F.L.O.P. (Fat Fabulous Ladies On Ponies), it brings me great joy to see ponies out in sport.  The 2013 FEI Pony World Driving championships wrapped up last weekend with the Netherlands taking home Team Gold.  Germany took Silver, Hungary Bronze.  The US finished 7th in the team competition.

I’ve often thought of Combined Driving as sort of a “sister sport” to Eventing.  The prerequisites are all there: a boring Dressage phase, a technical phase in the Cones, and badassery in Marathon, complete with red on right and insanity in the middle.  Out west, where we have a significant Reining community,  there’s traditionally been a lot of enthusiastic murmurs at the thought of Reining getting picked up by the Olympics.  While I’d love to see any horse sports added to the Olympic roster, part of me wonders if it wouldn’t be in Eventing’s best interest to team up with Combined Driving and push for their inclusion.  Combined Driving exists under the FEI’s banner, and with the space requirements that both Eventing and Combined Driving require we may be able to better secure the space needed for our sports if the two communities work together.