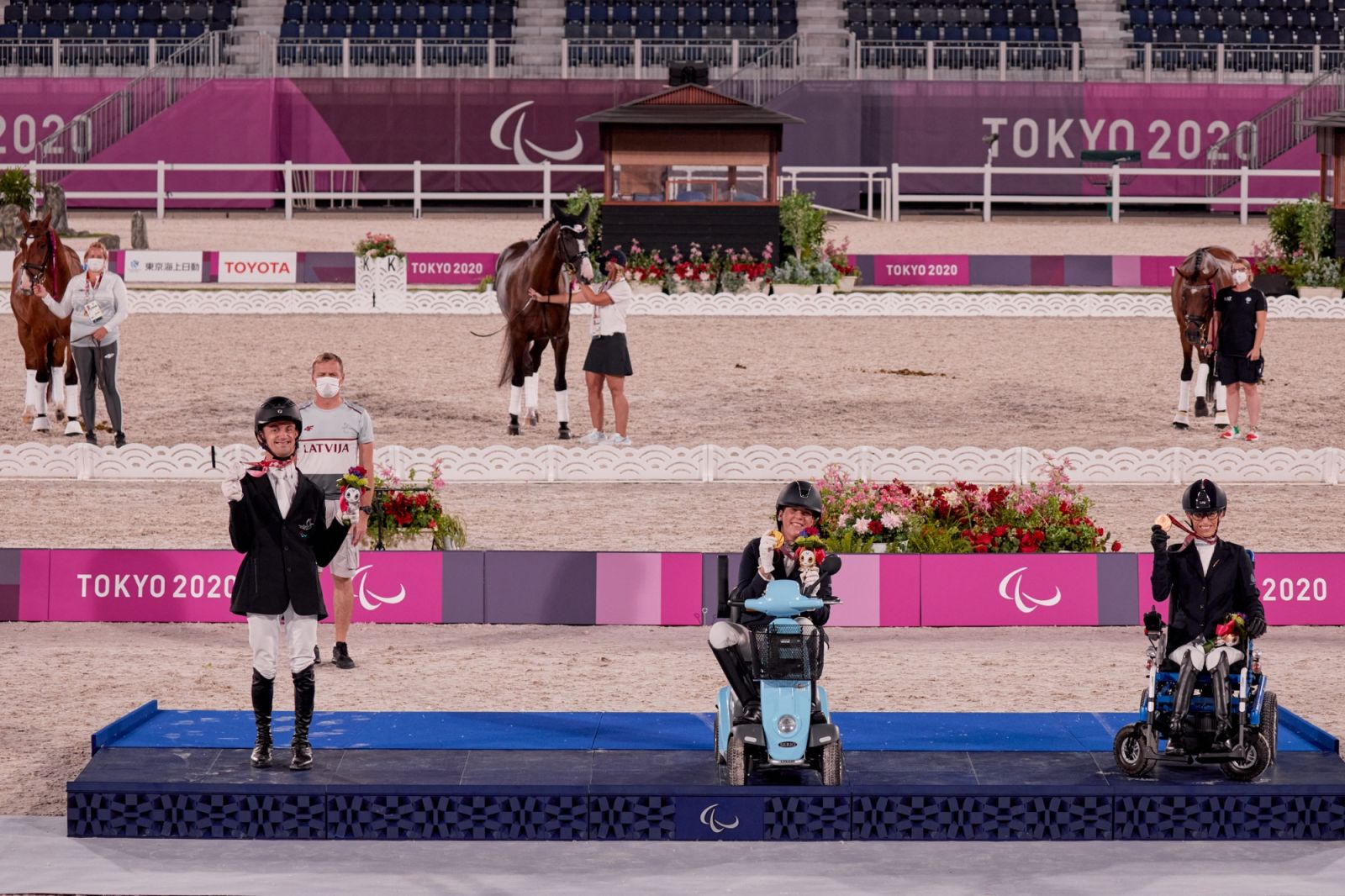 Grade I was the only Grade to have three athletes with a score of over 80% on the podium. Roxanne Trunnell (USA) scored 86.927% on Dolton to break the previous record of 84.750% set by Sophie Christiansen (GBR) in London 2012.

“I just wanted a nice test. It felt good with the music the whole time,” Roxanne said. “It’s been really nice. Everyone is so happy and friendly it makes everyone in the barn happy. It’s just fun. Everyone will be excited when we get home.”

The ever-brilliant Rihards Snikus (LAT) took his second silver in Tokyo on King of the Dance with 82.087%, doubtless prompting more demands for his DJing skills when he gets back home. For Rihards, these two medals more than make up for his disappointment at the London 2012 and Rio 2016 Paralympic Games. And third place went to Sara Morganti (ITA) on Royal Delight, with 81.100%.

Sir Lee makes it a golden 14

Sir Lee Pearson (GBR) became the most successful athlete in the entire competition by taking his third gold medal of Tokyo 2020, the 14th of his Paralympic career, in the Grade II Freestyle.

His relatively inexperienced and home-bred partner, Breezer, took him to a massive 82.447% to take the title ahead of Pepo Puch (AUT) who rode Sailor’s Blue to a score of 81.007%. Meanwhile Lee’s young teammate, Georgia Wilson (GBR), added another brilliant bronze to her collection on Sakura with 76.754%, which is not a bad result for the reserve rider who was called to Tokyo as a last minute replacement for Sophie Christiansen.

“Number 14, not that we’re counting,” laughed Lee. “I’m twice over the moon. I actually didn’t care if I medalled. That horse gave me his heart in there. He was so much braver than the team and individual test a few days ago. He was still nervous, and we had a tiny little spook when we entered but I said ‘come on we can do this’.”

Lee came to Tokyo with Breezer having had to retire from their selection event. “I’ve not managed to ride this Freestyle in a competition so I’ve been nervous for days. He’s brilliant. I’m taking the best horse home. I didn’t think I could love him any more than I did before but he’s beautiful, amazing.”

Sanne Voets (NED) stormed to victory in the Grade IV Freestyle with a massive personal best score of 82.085% to win her class. Riding Demantur N.O.P. to the stirring music of Dutch artists HAEVN, she finished comfortably ahead of silver medallist Louise Etzner Jakobbson (SWE) who scored 75.935% on Goldstrike B.J. Manon Claeys (BEL) took bronze on San Dior 2 with 75.680%.

Louise’s silver was even more remarkable given that she broke her leg falling off her bike just a couple of months ago, and only got back on a horse to ride two weeks ago during the horses’ quarantine in Aachen (GER).

Speaking after her ride, Sanne said: “I’m not sure I can find the right words. I was really focussed and normally when I first enter a test I try to make eye contact with the judge. I never did that here it was just me and my horse and the music. It was a bit like hypnosis. It felt powerful and soft and relaxed and confident. Sometimes when you ride a test you’re thinking ‘what do I do now?’ but it was like it just happened to me. It felt like we found that true harmony and it was the two of us and no one else.”

“I’m really blown away. The mare is just fantastic. What can I say, I’m a bit speechless because coming over here with a young horse and showing the world what she’s capable of is just genius. I knew she could, but I thought maybe it was a bit early to show everyone because at home she can work like a queen but at home is at home.”

Michele went into the arena just after Frank had posted his great score. “Once you’re riding into the arena you don’t look at that,” she said. “I know he had a high score but I thought the mare feels good, so I came into the arena and tried to make something even better. That’s the spirit.”

In the second highest winning score of the night, Tobias Thorning Jorgensen (DEN) rode Jolene Hill to his second gold of the Paralympic Games in the Grade III Freestyle. Together they scored a massive 84.347% to take the title ahead of Natasha Baker (GBR), who scored 77.614% on Keystone Daw Chorus. Anne Katrin Lubbe (NOR) took the bronze on La Costa Majlund with 76.477%.

A clearly delighted Tobias said after his ride: “I feel great. I left my head out here this time because I wanted to show I can do this. I just rode to the edge of being too much and I was probably closer to some mistakes today than I was yesterday, but I took the chance.

“I always had the dream of double gold but I knew it would be hard. I would be happy if it was a silver or bronze, just to get two medals at my first Paralympics, but two golds is amazing.”

At the end of five days of stunning Para Dressage competition, the horses and athletes of Tokyo 2020 will now start their journeys home. They will remember a record-breaking week of drama and fierce competition which saw new champions crowned and titles re-won or defended.

The world’s best Para Dressage athletes will gather again in August 2022 at the FEI World Championships in Herning (DEN). Until then, the memories of this competition in Tokyo will be slow to fade. It’s been a dazzling, brilliant Paralympic Games.