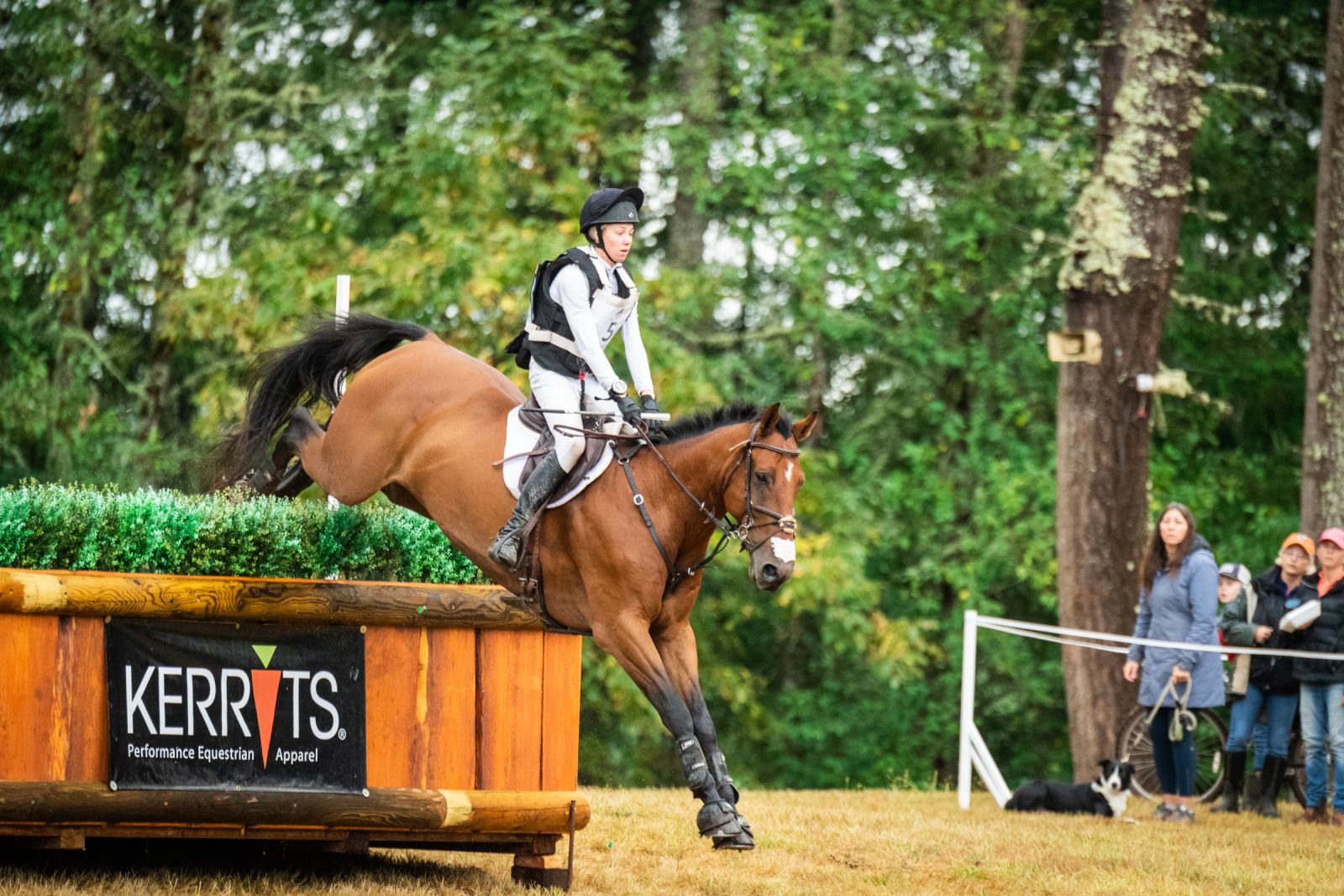 Young Rider Sophie Click and her Holsteiner gelding Quidproquo delivered consistent performances throughout the weekend to win the $4,000 Tin Men Supply Advanced at Aspen Farms Horse Trials. Their clear show jumping round today over the course designed by Chris Barnard secured the win. They moved up from second when the overnight leaders, Alina Patterson and Flashback, took a rail.

Of her clear show jump round, Click said, “I’ll occasionally have a rail here and there, so I’ve been working hard on the show jumping. He’s been jumping really well the last few shows. It’s all finally coming together; he was able to put in a clear round for me today.”

“The highlight for me was our cross-country round on Saturday,” said Click. “We were really on the same page the whole course; it was a smooth ride. He was exceptional over every jump.” Up next, Click is aiming for the 4*-Short at Woodside in October. 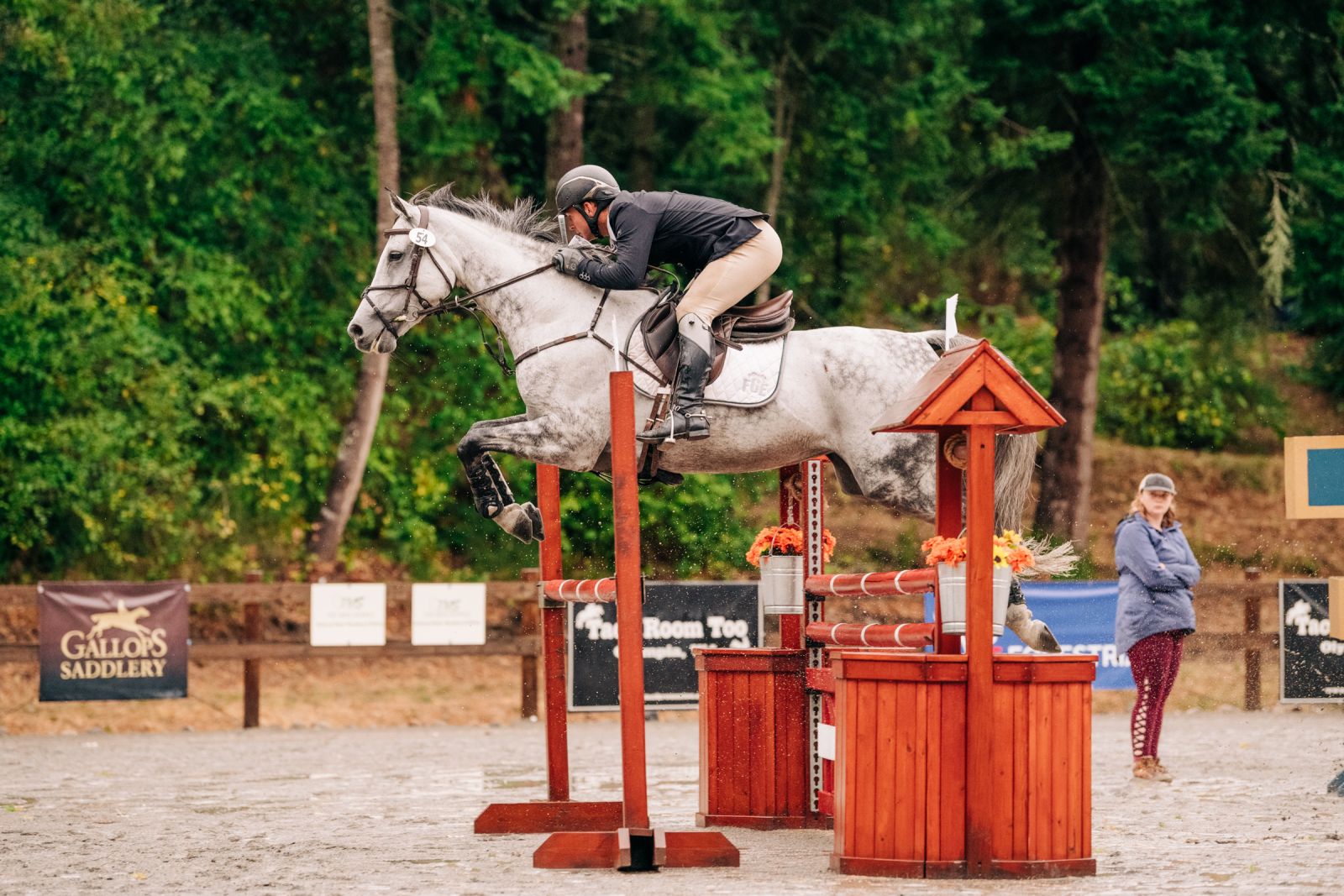 The other big winner of the weekend was Marc Grandia, who won three divisions.

In the Open Intermediate, Grandia piloted Campari FFF, owned by Team Rebecca LLC, to a win on a score of 35.1. They moved up from fifth after producing the only double-clear cross-country round in their division on Saturday, and held the lead today after just one rail in show jumping.

Grandia also won the Open Preliminary division with the Dutch Warmblood mare Hyacinth, owned by Jessica Rosch. They had two clear jumping rounds, adding just 1.6 time faults on cross-country to their dressage score, which moved them up from sixth to first. 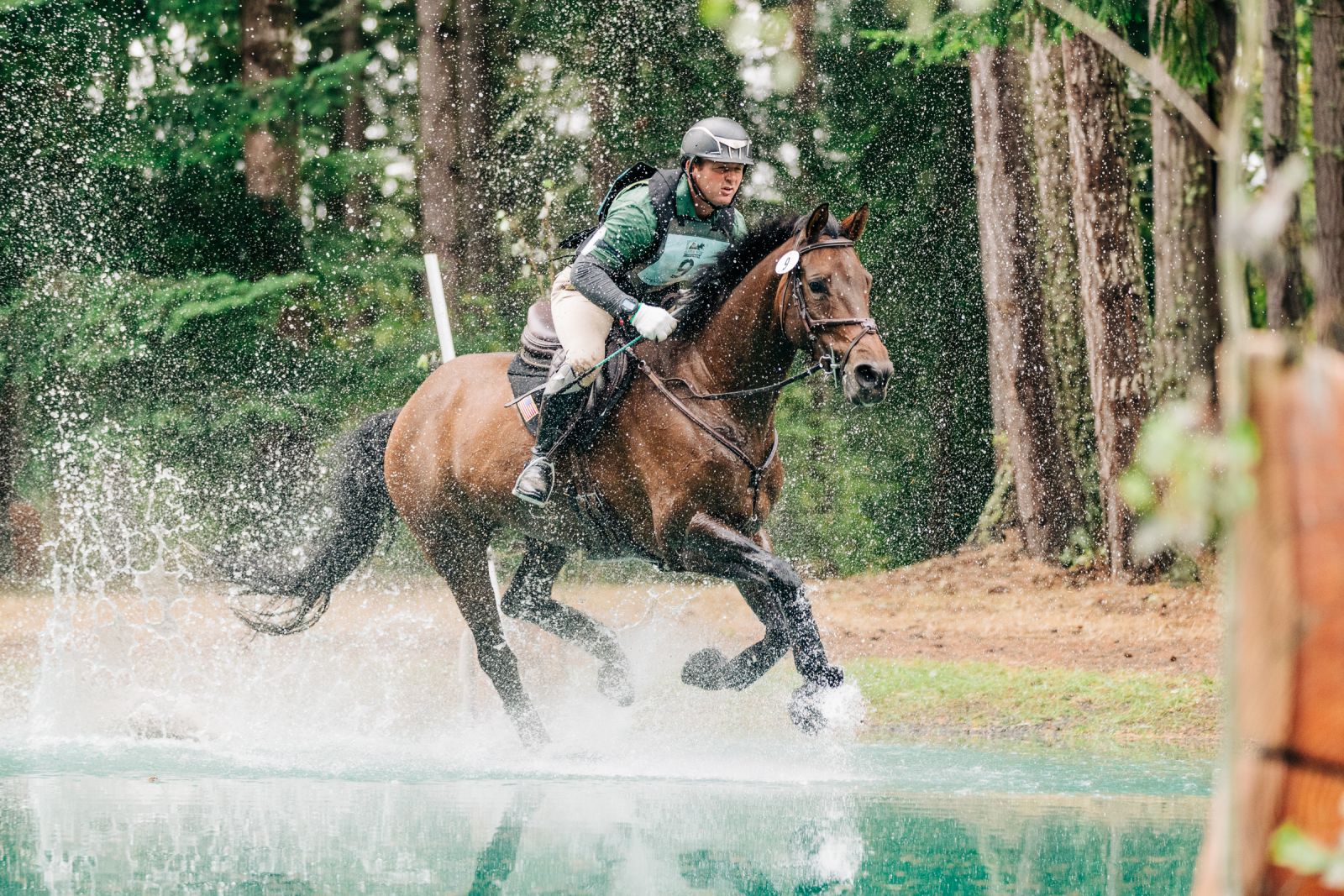 In Area VII Open Preliminary Championships, Jordan Linstedt moved up from second to win after the overnight leaders Karen O’Neal and Clooney 14, owned by Annika Asling, took a single rail to fall to second.

“Lola was fantastic today,” said Linstedt. “She felt a little tired after running hard yesterday. She’s green to this level–this is only her third Prelim run. I could not be happier with her. She felt fantastic yesterday, and today jumped in the ring like a million bucks. I feel incredibly lucky to sit on such an amazing horse.”

Linstedt plans for Lovely Lola to run her first FEI at Spokane Sport Horse Horse Trials. “I just recently syndicated her with some partners,” shared Linstedt. “I’m extremely excited for her future. And a win is always fun.”

“I thought he was super,” said Birtcil after her clear stadium round. “He’s only 5, but he’s an old soul. He’s super brave.”

Birtcil was most pleased with his consistency at the show. “He’s generally good on the flat,” she said. “He’s super brave cross country, and he’s a good show jumper. I thought that he really shined this weekend and put his best foot forward in all three phases.”

According to Birtcil, Le Top F’s next stop will be the 5-Year-Old Young Event Horse Westcoast Championships this fall. 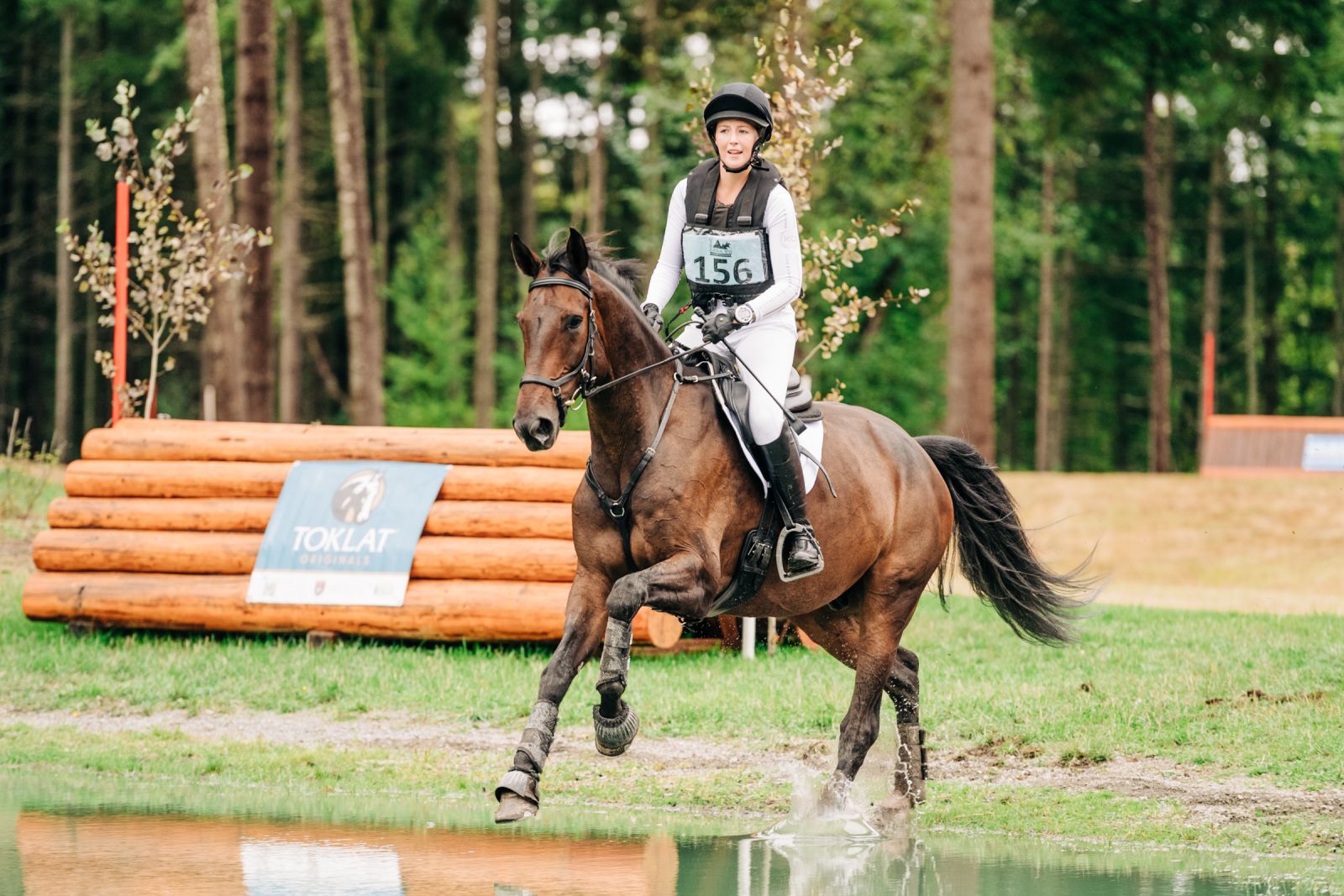 “It was pretty darn good,” Williams said of her clear show jumping round today. “I got a little sticky on fence six to seven, but we made it through, and we came through in the end! The highlight for me is the hospitality and the great atmosphere here… The wonderful event Suzy and Jonathan Elliott put together for all of us.”

Up next Williams and Dark Horse will be competing in the USDF Region 6 Championships at second level, and she is considering moving up to the Modified level at their next horse trials.

Kelsey Horn and the Dutch Warmblood gelding, Konnan O, owned by Mark Schreiber, won the Area VII Open Novice Championship on their dressage score of 21.1–the lowest final score of the entire show.

In the Area VII Junior Training Championships, Lizzie Hoff and her mare HSH Explosion finished on their dressage score of 22.1 to win, leading from start to finish.

“Our show jumping is our hardest phase, so I was a little bit nervous going into it, but she was super good,” said Hoff after her winning show jump round. The highlight of the show for her was their dressage test: “Our last couple of dressage tests we struggled a little. She improved here by 13 points. I was blown away.” Hoff and HSH Explosion are aiming for their first attempt at Modified level at Spokane Sport Horse Horse Trials.

“We imported him last fall from Ireland,” said Wright. “My coach Karen O’Neal and also Attila Rajnai have been helping me bring him along. We’re working on figuring each other out. I am really lucky to have this horse. He was super honest today, and he’s come so far from when we first got him. I’m super grateful for him, for the support of my team and my parents, and for the Elliotts for hosting.” 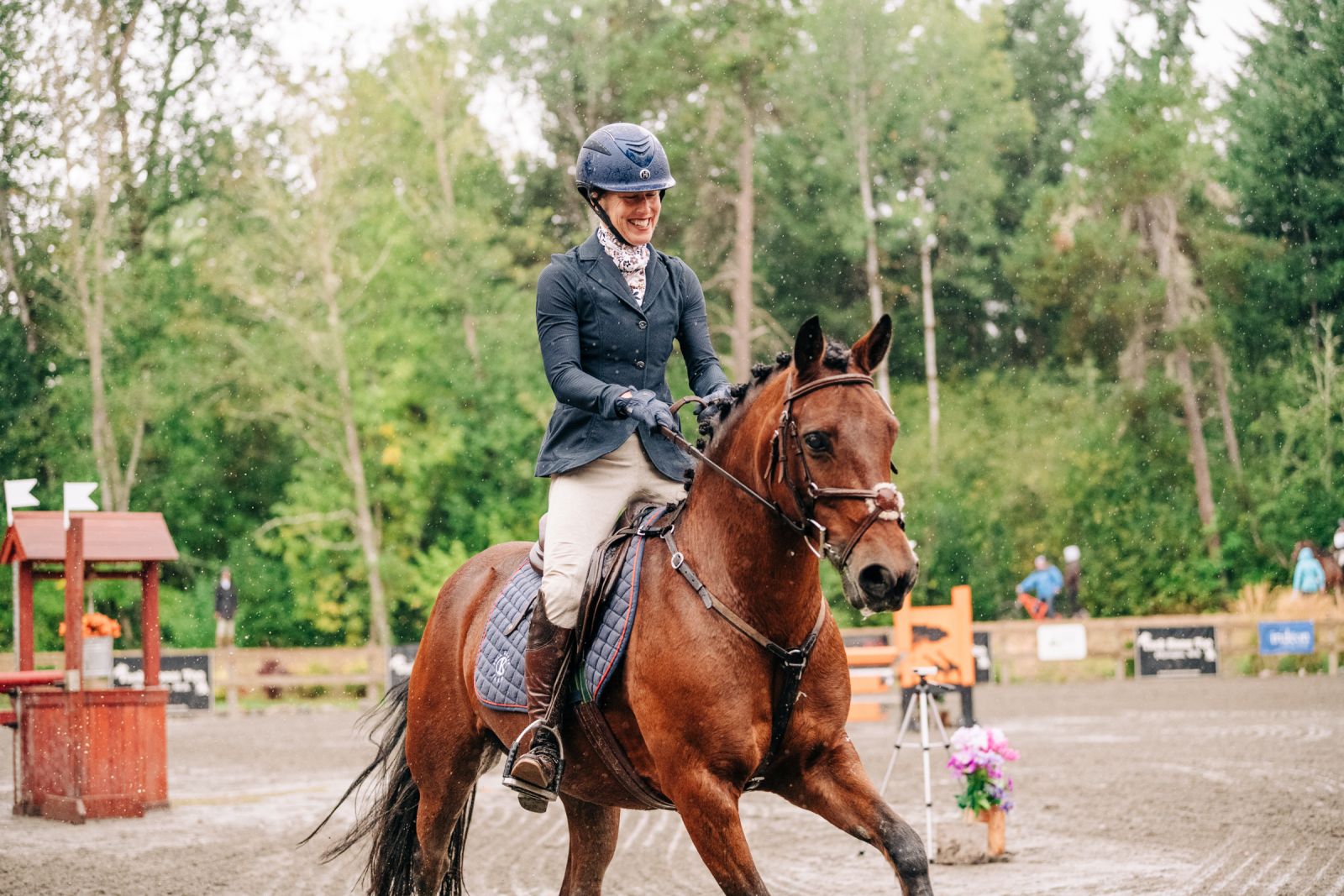 In the Area VII Novice Rider Championship, Katy Hood and her 14.1 hand U.S.-bred Connemara gelding, Padric, won on their dressage score of 24.

“The highlight for me is this moment right now, here with my coach and my teammate, and being able to celebrate with them,” said Hood minutes after her winning show jump round in the Tack Room Too arena. “Padric was fantastic this weekend. He’s coming back from a season off. He was injured last year. I didn’t know if I would ever be able to ride him again, let alone compete. This is huge.” 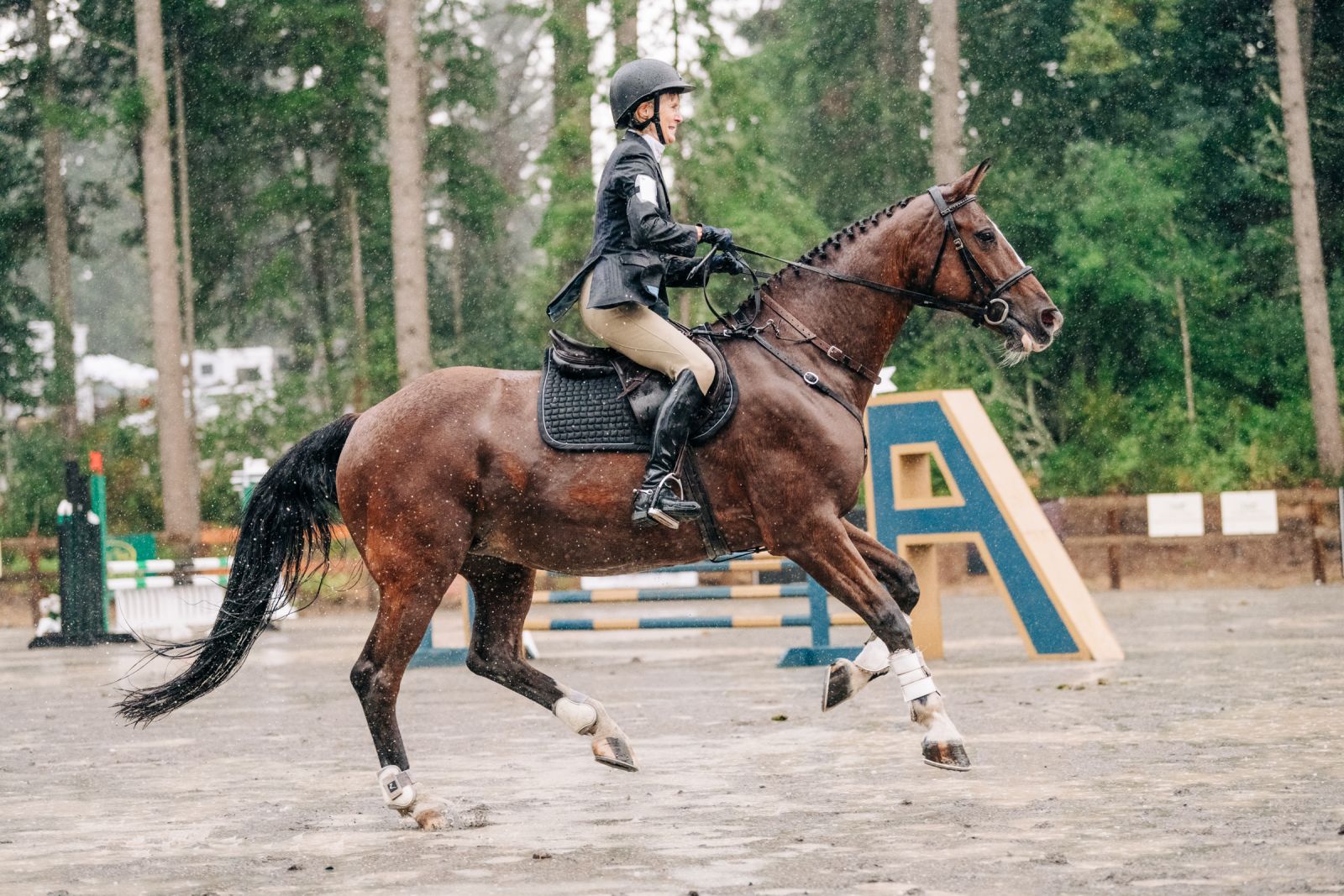 The Area VII Open Beginner Novice Championship division boasted 27 starters, and the show jumping track on Sunday in rainy conditions shook up the leaderboard. Sarah Sullivan and her OTTB Ready Or Knot Here’s Mouse! led after the first two phases but had one rail down. Chris Gianini and her mare Athena delivered a clear show jump round in the rain to move from fourth to first. They won on their dressage score of 29.5.

In the Area VII Junior Beginner Novice Championship, Hayden Brown and Cooley Merrywell Mint won with a score of 31.3. 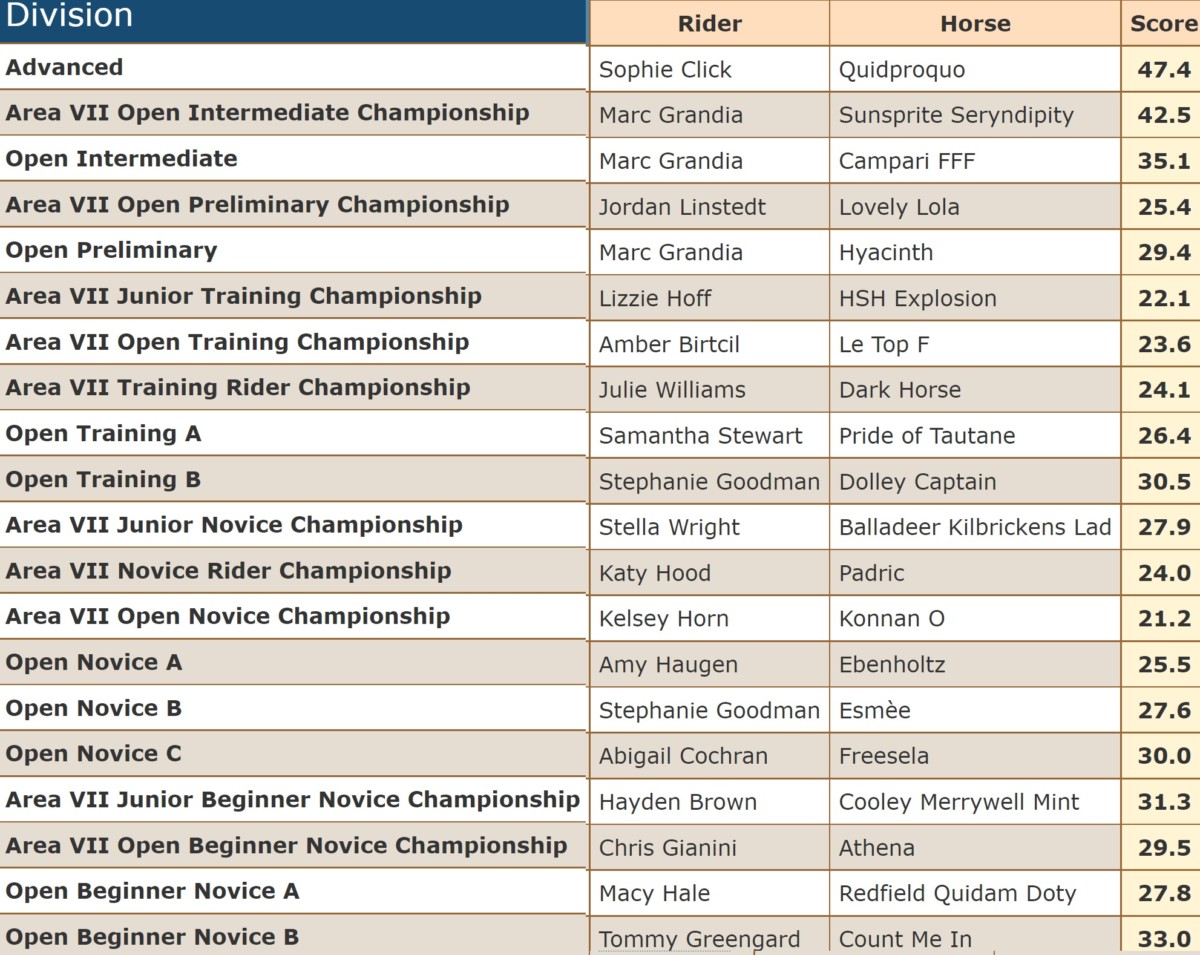