One of Eventing Nation’s very first members, known in some circles as retreadeventer, has submitted some great coverage of the show jumping seminar held Wednesday for the USEA convention.  The seminar was held an Frying Pan Park in Herndon, VA.  Retreadeventer: 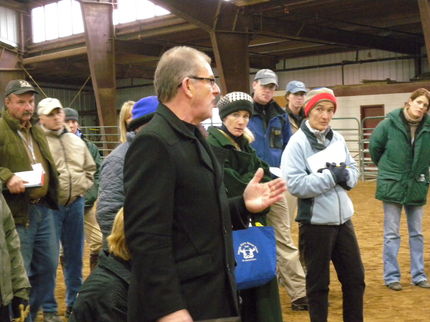 Richard Jeffries  leads discussion about steps in setting a show jumping course, starting with laying poles on the ground where the jumps are to go.  Advanced level rider Mogie Bearden Muller and former USET Olympic squad member Jane Sleeper (and Liza Horan in green coat) listen to Richard explaining some aspects of course design (above).  Jumps were supplied by Difficult Run Pony Club. 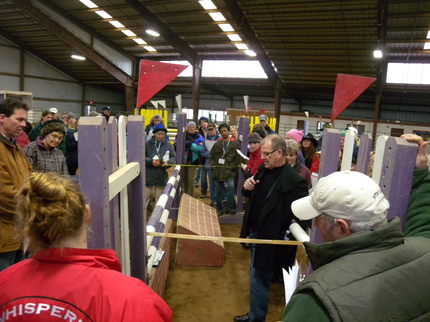 After jumps were built, Richard walked the course with the whole group explaining mistakes he found in each jump’s construction and adding insight into the lines and angles of each jump. 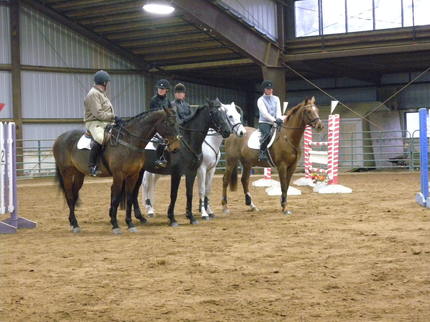 Packy McGaughn, Bonnie Mosser on Merloch (gray), Jan Byyny (on chestnut) and Allison Springer all participated very generously in the demonstration portion. Riders rode lines and Richard’s crew measured the strides and take off and landing points to illustrate how horses fit into related distances while jumping. Then each rider rode the course.
Bonnie Mosser and Merloch jump the course.
Thanks again retreadeventer.  A lot of changes are coming to Eventing Nation over the next few months, and I hope that one of the changes will be more awesome member-contributed content just like this.
0 0 votes
Article Rating
Subscribe
Login
Please login to comment
0 Comments
Inline Feedbacks
View all comments
More Insanity on Horse Nation >>