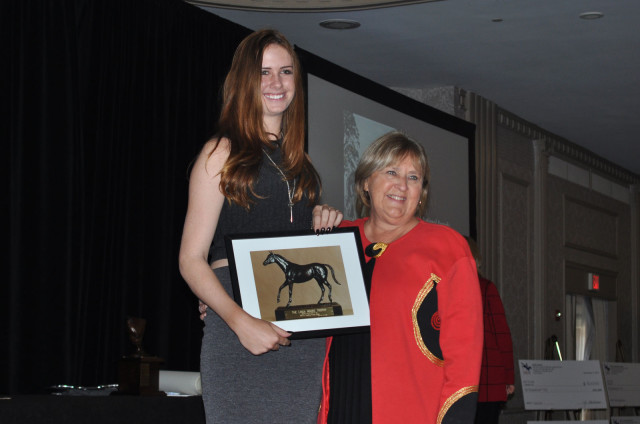 The 2015 USEA Annual Meeting and Convention wrapped up today at the Omni Shoreham Hotel and Resort in Washington, D.C. It was a light day with Area II conducting business during its committee meetings and honoring Area II members at the awards luncheon. The USEF Developing Riders and USEA Board of Governors also met this morning. Here is what you need to know from the final day of the 2015 Convention.

Developing Riders is a pipeline for future stars of the sport, and Coach Leslie Law wants to mentor and guide them through the beginning of their riding careers and prepare them for a hopeful eventual transition to the High Performance lists and training with David O’Connor. The Developing Rider program is doing well and young riders are inspired to get involved.

The whole of Developing Riders is very excited about the new Karen Stives Developing Rider Tour, which will send Eventing 25/18 riders to Europe for a three to four week long educational experience with the ultimate goal of competing in the Under 25 CCI3* at Bramham International. Leslie has big ideas for the tour, with plans to take the riders to top dressage, show jumping, eventing and steeplechasing yards to get a look at their programs and ask questions of some of Europe’s top professionals.

Eventing 18/25 riders go through an extensive application process before they are named to a list. For riders applying to be considered for Eventing 18 specifically, Leslie encourages them to send in videos of them riding. Talent spotters do their best to watch everyone who applies competing at events throughout the year, but there are many interested young riders, and videos can help selectors get a better, longer look at a rider’s skill and potential.

There was a discussion to allow USEA members to choose which Area they want to claim on their membership. This was born out of the redrawing of the Area lines that removed Western Pennsylvania from Area VIII and into Area II. The Board was receptive to the concept and will work out the details to implement this in the 2017 membership year.

Vice President of Education Phyllis Dawson reported that the Licensed Officials Committee has created an ombudsman position to advise people going through the process of becoming a licensed official. Gretchen Butts has been selected for that role. The LOC is also working on restructuring the education system and moving as much educational material as possible online for continuing education, training programs and evaluations. This is intended to give those seeking licensing as much time in the field as possible for hands on experience during training sessions and reduce the amount of time spent in the classroom. This update to the system will be implemented in stages over the next two years.

Holly Covey and Bonnie Kibbie were able to present their ideas for a Volunteer Incentive Program inspired by the late Seema Sonnad. We will bring you many more details on that program soon, but the Board was extremely supportive of the concept and moved to form a Volunteer Committee headed by President-elect Carol Kozlowski to create a proposal for the program.

Jennifer Hardwick, USEA’s Director of Member Services and Meeting Planner, reported that the Convention had approximately 408 attendees. More than half of them were on site registrations, which reflects the convenient and appealing location of the Convention in Washington, D.C. this year.

The 2016 Annual Meeting and Convention will be in Fort Lauderdale, Florida at the Diplomat Resort and Spa Hollywood, Curio Collection by Hilton. The dates for the meeting are December 7-11. If you’re on the fence about planning to attend, just know that the hotel has a private beach.

Thank you so much to the USEA for putting on an excellent convention that brings eventers together to celebrate and advance the sport. We are honored to have attended. Stay tuned to EN for even more coverage from the Convention coming your way.