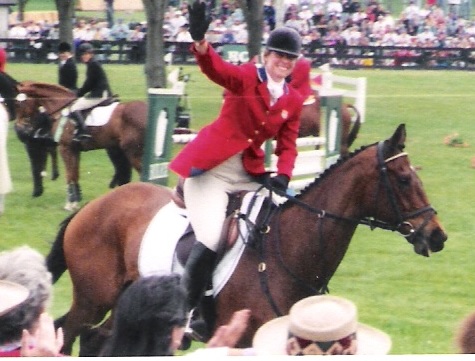 Molokai at Rolex in 1998. Photo courtesy of Dorothy Crowell.

Hot of the presses — the USEA has just announced eight new inductees to the USEA Eventing Hall of Fame to join the other 32 icons of the sport who have achieved this honor. The new inductees are Rebecca Broussard, Mike Huber, Jacqueline Mars, Dick and Vita Thompson, Margaret Lindsley Warden, McKinlaigh, Molokai and Winsome Adante.

Rebecca Broussard has made a lasting impact on eventing in a variety of ways, from serving on the USEA Board of Governors and Executive Committee to acting as a trustee on the USEA Endowment Trust. She owned top horses for numerous riders, from Karen O’Connor to Phillip Dutton, and started the Event at Rebecca Farm in 2002. Her legacy will live on through many years to come through her many contributions to the sport, such as the “Big Becky” $30,000 Developing International Rider Grant given in her name each year at the USEA Convention.

Mike Huber represented Team USA at the 1978 World Championships at just 18 years of age, the first of many accomplishments in his storied career. He won individual and team gold aboard Quartermaster at the 1987 Pan American Games and also rode for the U.S. at the 1990 and 1994 World Equestrian Games. He served on the USEA Board of Governors starting in 1989 and became the youngest president of the organization in 1993. He chairs the USEF Eventing High Performance Committee and also sits on the USEF Eventing Technical Committee, along with being a much-loved coach and trainer in Area V.

Jacqueline Mars is one of the most prominent owners of event horses in USEA history, having owned renowned athletes like Winter’s Tale, Prince Panache, Giltedge and Harbour Pilot. She has long supported USEA and USET programs, stretching back to the Young Riders Training Sessions at USET Headquarters in Gladtstone, New Jersey, in the 1990s. She has helped countless riders in their careers and continues to better the sport through her membership in syndicates of top horses in the U.S.

Dick and Vita Thompson have impacted the sport in countless tangible ways, from their years of dedication to running the Radnor Hunt Three-Day Event to their ownership of horses for top riders like Jimmy Wofford and Karen O’Connor. The Thompsons have owned such great horses as Castlewellen; Park Hall; Joker’s Wild; Upstage; and, most notably, Biko, the USEA Horse of the Century and himself named to the USEA Eventing Hall of Fame after a legendary career with Karen O’Connor.

Margaret Lindsley Warden helped to organize the very first event ever held in the U.S. in at Percy Warner Park in Nashville, Tennessee, in 1952, basing the competition off the international Olympic model used by the military. The U.S. Three-Day Trials for the Olympics were held in Nashville the following year as a result, with that event eventually becoming the Middle Tennessee Pony Club Event, the longest and oldest continuous running event in the U.S. She also served as a member of the USET Board of Directors.

McKinlaigh seemed destined for greatness from the moment owners Thom Schultz and Laura Coats spotted him in Ireland. He partnered with Gina Miles at Thom and Laura’s Rainbow Ranch in Paso Robles, California, proceeding to win just about every event they entered over the next two years. He and Gina finished 11th in his first CCI4* at Rolex Kentucky in 2002, won a bronze medal at the 2003 World Cup Cup in Sweden, won individual bronze and team gold at the 2007 Pan Ams and won an individual silver medal in the 2008 Olympic Games in Hong Kong.

Molokai was just off the track when Dorothy Crowell found him as a 4-year-old, and his athleticism and incredibly gallop made him an ideal candidate to thrive in the traditional long format of eventing. Dorothy and “Mo” won individual silver at the 1994 World Equestrian Games in The Hague and finished second in the inaugural CCI4* at Rolex in 1998 in front of a hometown crowd. He lived as a king during his retirement in Kentucky and Florida, passing peacefully in 2013 at 30 years old, and will be remembered as one of the greatest cross country horses in U.S. history.

Winsome Adante, owned by Linda Wachtmeister, won some of the top events in the world during his career with Kim Severson, taking first at Blenheim in 2000 and winning Rolex Kentucky in amazing three times in 2002, 2004 and 2005. “Dan” also won individual silver at the 2004 Olympic Games in Athens and team gold at the 2006 World Equestrian Games in Aachen. He finished third at Badminton in 2007, the final event of his career. Named USEA Horse of the Year three times, Dan also held the title of USEA Historic All-Time High Point Horse for more than a decade.