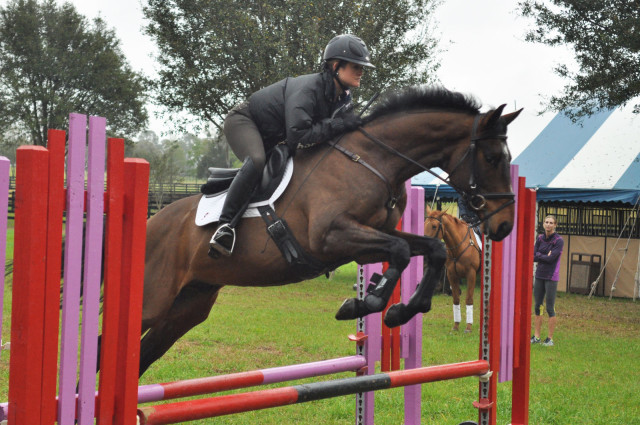 Ashley Kehoe and Louie, bred by Michael and Nathalie Pollard.

The afternoon sessions at the USEA’s Young Horse Symposium in Ocala consisted of mounted sessions with several 4- and 5-year-olds at various stages in their training.

During the morning classroom sessions, Tim Holekamp had been watching the weather forecast like a hawk and ultimately declared that while it would be raining, there would be no severe thunderstorms.

When he asked if everyone was alright with a little wet weather and would they still want to do the outdoor sessions or stay inside and watch more videos, everyone agreed they could handle a little rain.

What started as a drizzle turned into steady sideways rain, so kudos to all the spectators who stuck it out and the riders and horses who graciously participated anyway (then again, we’re all eventers, so what would you expect?)

Earlier in the day, the class discussed what makes a good gallop. Neuroanatomist, geneticist and fourth generation equine breeder Maren Engelhardt says a good gallop can’t be determined on the flat alone.

To get the big picture, you have to watch a horse gallop between jumps and examine the pace before, during and after fences. 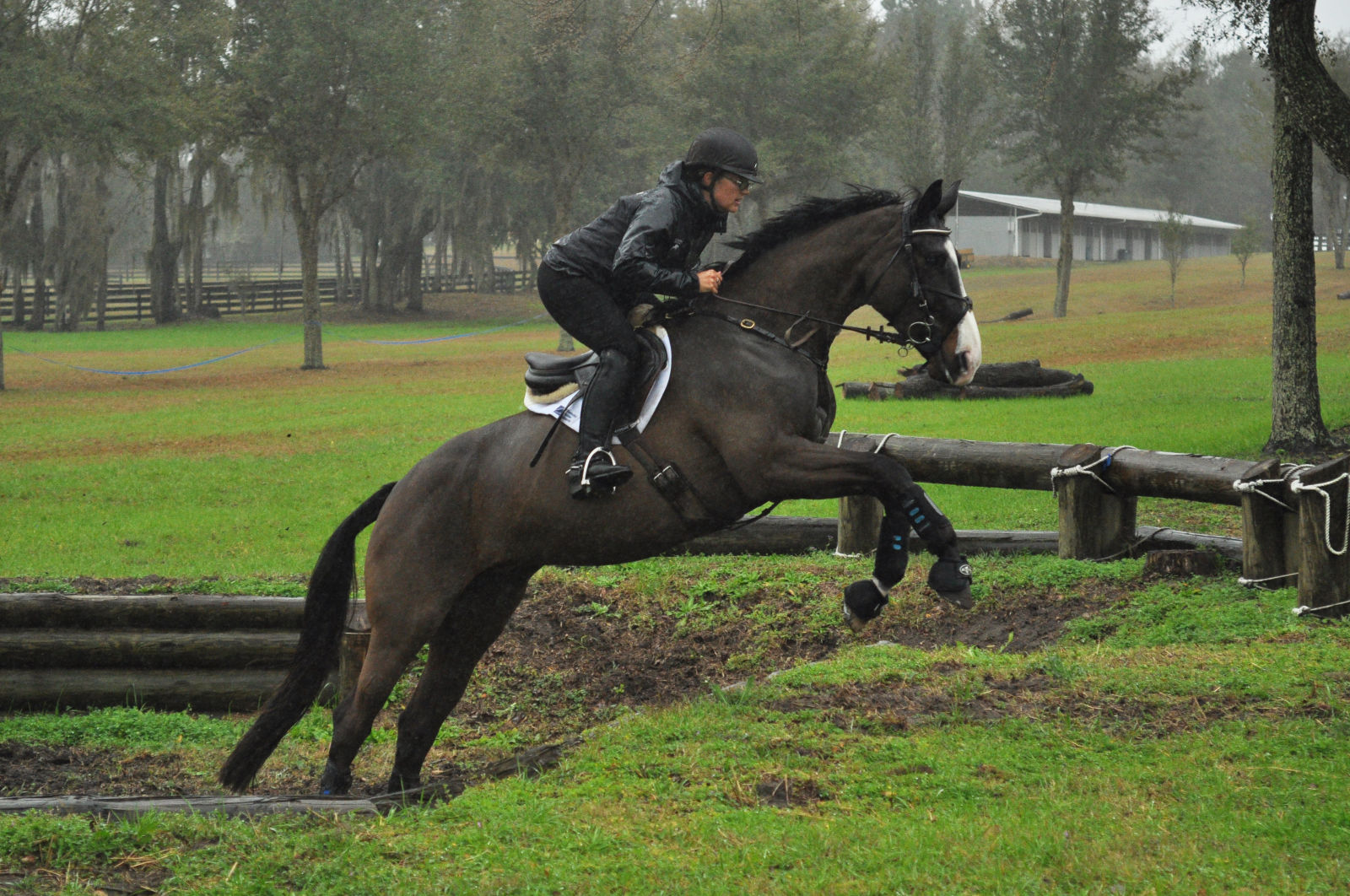 Lisa Barry and Rosie’s Little Miss Liberty. This is a two-star horse, a good comparison to the young horses in the group.

What makes a good gallop?

It was fun to watch video clips of horses that competed at the Bundeschampionat, judging their gallop and jump without knowing their identities before finding out who they are, the scores and comments from the judges and what became of their eventing careers.

It was interesting to hear the different comments throughout the room and what priorities people put on certain aspects of a horse’s movement and jump. What was for certain was watching and judging these horses was harder than you might think!

So then we took what we learned about the gallop in the classroom to the cross-country at Longwood Farm South. We watched a number of horses jump small courses, and Leslie Law stopped by for a few minutes to critique some horses gallop.

He loved the way one off-the-track Thoroughbred moved forward effortlessly when his rider put her leg on. He liked the horses that were low to the ground as they galloped on and moved easily with good rhythm.

He wasn’t as keen on a horse that puts it’s ears back and hollowed a bit when asked to go forward. His favorite galloping horse was Ready or Not (Jumbo x Blaze O’ War), a gray Irish Sport Horse ridden by Sharon White.

Leslie said you can’t always judge a gallop from the ground. Often he likes to be able to get on and feel the gallop and the horse’s power before making a decision. He also said that “the more Thoroughbred you buy, the more chance you have of it going the distance,” or still having gas in the tank at 12 minutes.

There has been some discussion about adding gymnastics to the Young Event Horse Championships. Though a final decision hasn’t been made, Marilyn Payne said that gymnastics would level the playing field and set the horses up for success. It takes out the necessity for the rider to put the horse to a good distance and allows for larger jumps to show more scope.

Due to the rain, the ground was fairly squishy where the grid was set up, so the fences were kept low and the session short.

What do you think about the potential addition of gymnastics to the YEH Championships?