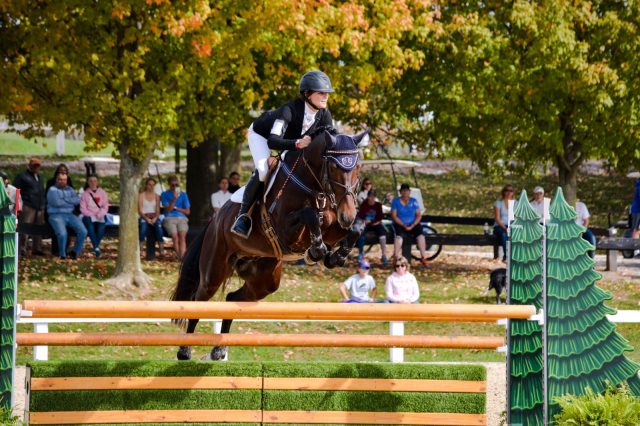 Someone flipped a switch on the good weather at the Hagyard Midsouth Classic Three-Day Event, CCI, and Horse Trials last weekend. This time of year, competitors at the Kentucky Horse Park often face an abundance of rain, cold and sometimes sub 40 temperatures. However, the entire weekend was a perfect 70 degrees with a breeze, perfect footing and happy horses.

While the USEF CCI2* and CCI3* Champions were crowned at Fair Hill International earlier this month, the USEF CCI* Champions were determined at Hagyard Midsouth. Winning the CCI* open division was Bethany Hutchins-Kristen and her Dutch Warmblood stallion, Geluk HVF. They were the leaders after dressage with a 42.2 and held their position for the entire competition. They posted a double-clear cross country round and lowered a single rail in show jumping to win the Richard Collins Trophy.
“He has just got so much heart, he tries so hard, and he loves to compete. I think he got here and it is like show time, so that is a lot of fun. He is still a little bit green at times, but I look forward to him continuing to develop. I think the sky is the limit for him,” Bethany said of the 6-year-old. “I think the thing with this sport is you always have high expectations when you work as hard as we do and you have done your homework. You come with the expectations that you could go home with a top placing, but it is also just a little bit of luck at the end.” 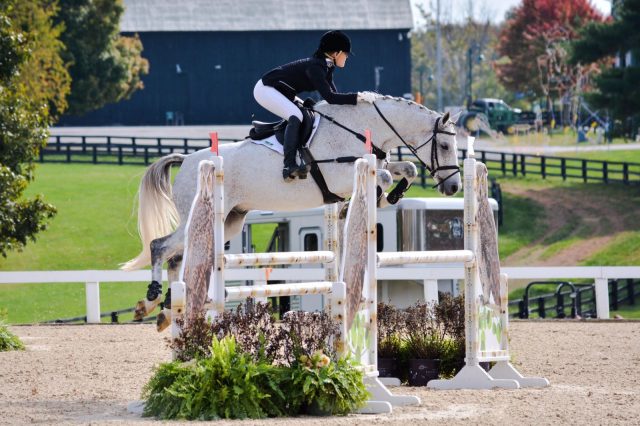 Hannah Leahey and Casanova. Photo by Miranda Akins/Photography In Stride.

Finishing as USEF CCI* Reserve Champion was Hannah Leahey and Cassinova, an 8-year-old Holsteiner owned by Jackie Leahey. They started their weekend with a 47.9 to put them in fourth. They finished on their dressage score with double-clear rounds in both cross country and show jumping. Hannah was elated after her show jumping round and happily gave Casanova lots of hugs and pats. 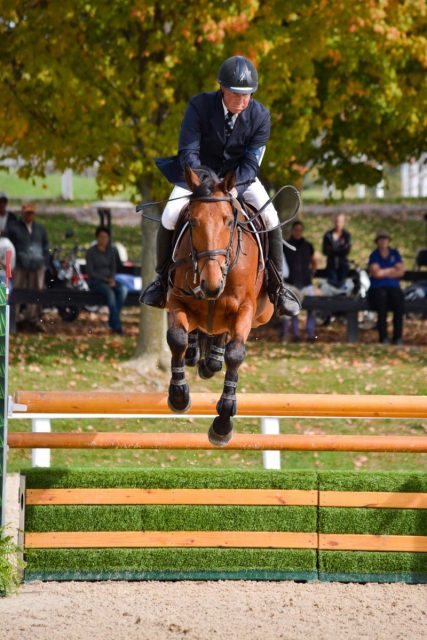 Coming in third was Robin Walker and Sbt Barolo, a 7-year-old Irish Sport Horse owned by Robin and Alston Kerr. They had a dressage score of a 48.8 which had them tied for fifth to start. Double-clear show jumping and cross country rounds moved them up.
Arden Wildasin and Watch Out, were tied for 13th on a 51.0 at the start of the competition. They made a big move up with double-clear jumping rounds to finish fourth. In fifth was Jennie Caras and Trendy Fernhill who moved all the way up from 15th after dressage and finishing on a 52.0. 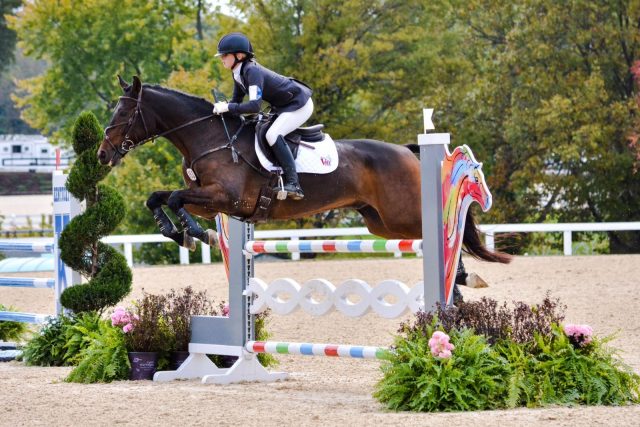 Winning the USEF CCI1*-JR/YR Eventing National Championship and receiving the Harry T. Peters Trophy was Elizabeth Scheltema and Kathryn Scheltema‘s Bill Owen. Elizabeth and the 12-year-old Canadian Sport Horse started out in second with a dressage score of 45.3 but posted one of only three double-clear show jumping rounds to move into the top spot.

“I came here to get around the course and really just for the experience,” Elizabeth said. “He is pretty new to me; I have only had him a year. We haven’t shown a lot this year, so we really just wanted the experience. He was Waylon Roberts’s Pan American horse [in 2015], so he has been there, done that, so I feel very safe with him. That has been very good for my confidence.” 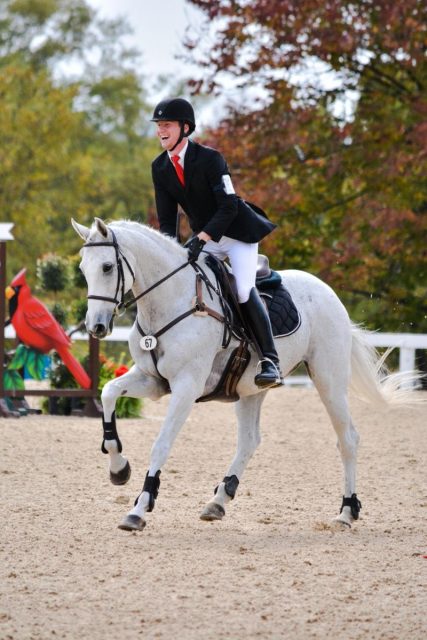 Colin Gaffney and Timaru. Photo by Miranda Akins/Photography In Stride.

Reserve Champion was Colin Gaffney and his 12-year-old Thoroughbred, Timaru, with a dressage score of a 45.6. Collin had a very large cheering section this weekend that all cheered with joy after he delivered a lovely double-clear round.
Taking third was Ashlyn Hayworth and her 8-year-old Irish Sport Horse Borasco. They scored a 45.3 in dressage and added just 0.8 time penalties from cross country and a rail with one time in show jumping. 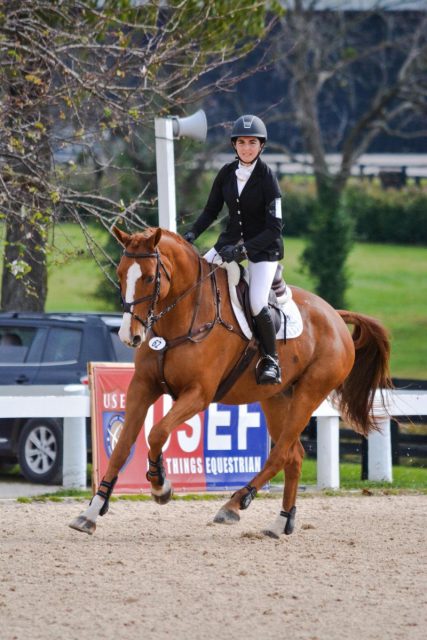 Ashlyn Hayworth and Borasco. Photo by Miranda Akins/Photography In Stride.

Finishing fourth was Madeline Backus and PS On Top of the World. They scored a 50.1 on the flat, clear cross country and one rail with one time in show jumping. In fifth was Natasha Erschen and FE Grand Torino with a 50.2 on the flat, 4.8 time on cross country and a rail with two time in show jumping.
Preliminary and Training Classic Three-Day Event 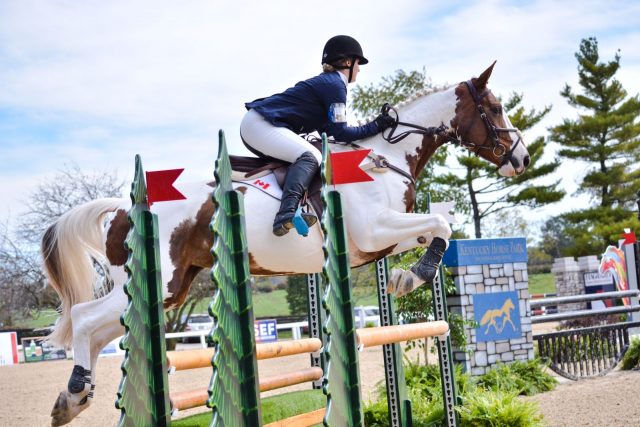 Cross country day shook up the standings in the long-format three-day event divisions. In the Preliminary Three-Day, only three combinations finished without penalties on endurance day, which opened the door for big moves up the leaderboard. Canadian rider Makayla Rydzik and her 9-year-old Canadian Sport Horse mare, Fluorescent Adolescent, moved up from sixth place after dressage to take the lead.
In the final phase, after all the riders in the division had lowered a rail or more, Makayla delivered a beautiful double-clear round to secure their win. They were the only pair in the division to finish on their dressage score, 35.5. 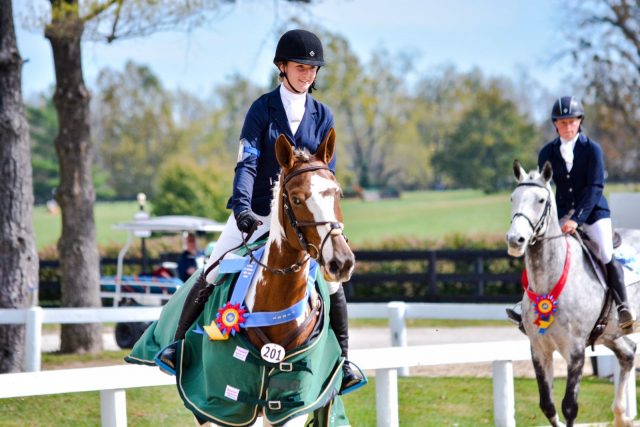 In the Training Three-Day, Michael Nolan and Kara Andrew’s 5-year-old Thoroughbred, Bad Moon Rising, started out in fifth place after dressage on 32.1. They moved up one place after endurance day, but fault-free show jumping rounds proved influential. They won the division on 32.1, just a fraction of a point ahead of the field. 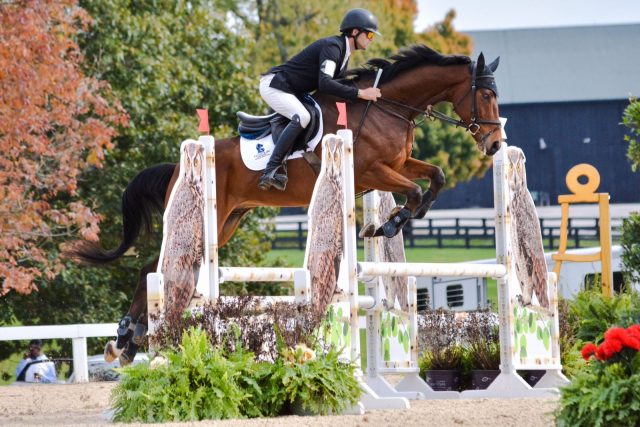