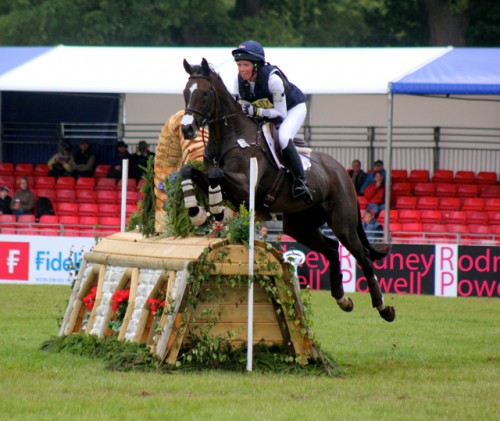 Meghan O'Donoghue and Pirate at Blenheim. Photo by Samantha Clark.

The USEF published a fantastic recap yesterday of how the 17 riders in the new Developing Riders/Eventing 25 program fared at major competitions this year. From Lauren Kieffer and Veronica’s winning streak at major CIC and CCI events this spring to Meghan O’Donoghue and Pirate delivering top-15 finishes at both their first four-star and European events, it’s been a hugely successful year, and it’s great to look back and congratulate the riders in the program for a job well done. Be sure to read the full story from the USEF for highlights from the 2013 Developing Riders/Eventing 25 program.

Zach Brandt: “I think first off what David has done in general whether it had been sending horses and riders to Europe or developing younger generation is really going to turn things around and it already has. He has helped me an unbelievable amount with my flat work, as well as my jumping, but my dressage has improved immensely. I don’t think I would have been able to move up as well as I did this year without his help. I did my first Advanced in March and my first CCI3* in May. He’s really laid the foundation down for all the Developing Riders on how to make it to the upper levels, how to conduct yourself at the upper levels, and what it takes to represent the U.S. in a team competition.”

Meghan O’Donoghue: “The opportunities that this program provided me this year have been amazing. The camp David put on for us this winter was focused on producing young horsemen in this country. The inspiration the camp produced certainly contributed to me success throughout the year. The Under 25 program is part of a pipeline for the future of U.S. eventing. There have been numerous opportunities that I have taken advantage of because of this program. It was an honor to be selected as part of the program’s first year!”

David O’Connor: “For a new program for the under 25 riders, it was brand new this year and nobody really knew what to expect and I think it exceeded all of our expectations. The weeks that we did training sessions and the clinics that we did afterwards that followed up all went really well. All of those riders really went on to compete in a better way than I think they had before. Two riders going to Europe, other ones winning two-stars, and others doing well in three-stars. To me it was a very successful program for this year.”