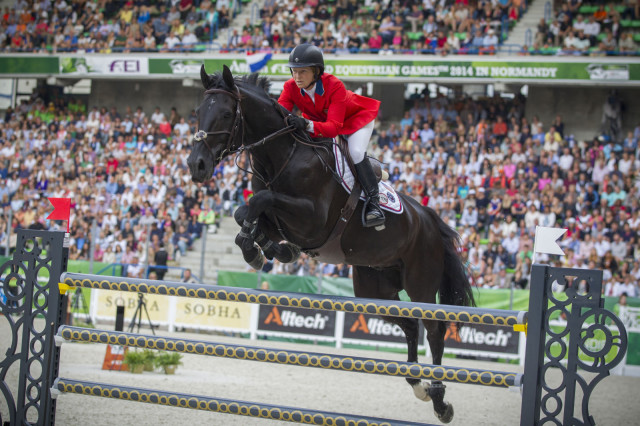 Beezie Madden and Cortes 'C' at WEG. Photo by Hippo Foto Team, Leanjo De Koster/FEI.
The USEF Pegasus Awards Dinner was held Friday night at the USEF Annual Meeting in Lexington, Kentucky, honoring equestrians across all disciplines for their achievements in 2014. Then the 2014 USEF Horses of the Year were named at last night’s USEF Year End Awards Gala.
Beezie Madden made history becoming the first athlete to win the USEF Equestrian of the Year title for the fourth time. Her impressive year in show jumping included multiple major wins and both team and individual bronze medals at the Alltech FEI World Equestrian Games. Beezie previously won the Equestrian of the Year award in 2005, 2006, and 2013.

Judy Werner, who has played an influential role in the American Saddlebred industry for decades, was honored for her devotion to equestrian sport as the Lifetime Achievement Award winner with the Jimmy A Williams Trophy.

Para-Equestrian Sydney Collier received the Ruth O’Keefe Meredith Memorial Trophy as 2014 Junior Equestrian of the Year for her honor, courage, dedication, and sportsmanship. Click here to see a full list of award winners.

With Beezie winning the USEF Equestrian of the Year title, it’s appropriate that Cortes ‘C’, her World Equestrian Games mount, was named the USEF International Horse of the Year.

A 2002 Belgian Warmblood gelding owned by Abigail Wexner, “Tiny” carried Beezie to individual and team bronze at WEG in Normandy. “He’s a horse I’ve believed in from the very beginning,” she said. “I’m so glad he got his year to shine.”

Four other horses were named 2014 USEF Horses of Honor; click here to learn more about them. We hope to see seem eventers on the list next year!