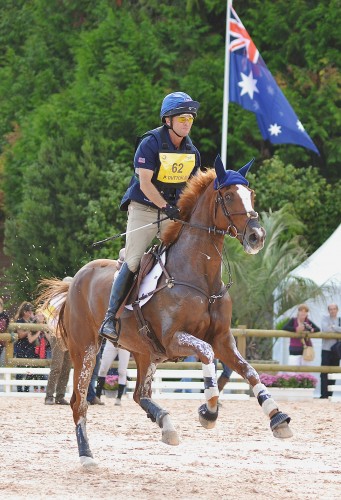 Hot off the presses! Here’s a look at the pairs that have been named to the 2014 Eventing High Performance Training Lists. In addition to the Global, World Class and National lists, there’s also a section of horses and riders that have been invited to participate in training sessions with Coach David O’Connor this winter and spring. We’ll be back in the morning with a full analysis on each pair named to the lists. Congrats to all the horses and riders!

Global Talent
Combinations that currently possess the ability to win anywhere in the world.

World Class
Combinations that currently possess the ability to be competitive anywhere in the world.

Meghan O’Donoghue (Carbondale, IL) and her own Pirate
Pirate is a 2002 Thoroughbred gelding

Lynn Symansky (Middleburg, VA) and her own Donner
Donner is a 2003 Thoroughbred gelding

National List
Combinations that are currently competitive in domestic international-level competition, and who the USEF Selection Committee feel have the future potential to be competitive anywhere in the world.

Jan Byyny (Purcellville, VA) and her own and Dick and Jo Bynny’s Inmidair
Inmidair is a 1999 New Zealand Thoroughbred gelding

Will Coleman (Charlottesville, VA) and The Conair Syndicate’s Conair
Conair is a 2003 Anglo-European gelding

Ellen Doughty (Heartland, Texas) and her own Sir Oberon
Sir Oberon is a 2002 Holsteiner/Thoroughbred gelding

Doug Payne (Pottersville, NJ) and Larry and Amelia Ross’ and his own Crown Talisman
Crown Talisman is a 2003 Holsteiner/Thoroughbred gelding

Sharon White (Summit Point, WV) and her own and Sheri Weber’s  Wundermaske
Wundermaske is a 2003 Hanoverian/Thoroughbred gelding

In addition, the following riders will be invited to participate in Training Sessions with O’Connor this winter/spring:

Kurt Martin (Middleburg, VA) and his own Anna Bella
Anna Bella is a 2006 Holsteiner mare

Colleen Rutledge (Frederick, MD) and her own Covert Rights
Covert Rights is a 2006 Thoroughbred Cross gelding