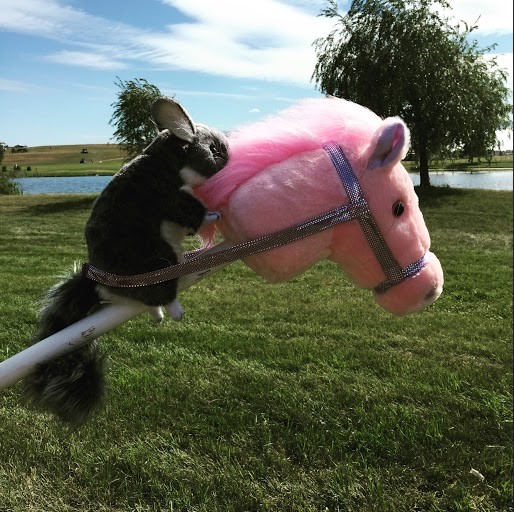 Chinch has been a hobbyhorse enthusiast for no short length of time. Here he is on course at Rebecca Farm in 2015.

EN has confirmed a recent decision by the US Equestrian Federation to make hobbyhorsing the newest USEF-recognized equestrian sport and to assist in the formation of an affiliate to be known as Hobbyhorse North America.

Competitive hobbyhorse is growing in popularity around Europe, and after a competition video went viral, the rest of the world quickly became familiar with the concept. Sadly, the internet went bonkers that something so kitschy could possibly exist and proceeded to mercilessly ridicule the young ladies and gentlemen involved. The USEF, however, had a different response.

“This is an incredible opportunity to increase participation in equestrian sports. By recognizing hobbyhorsing, we’re reaching an entirely new demographic of people who love horses but maybe don’t have the financial means to own and compete them,” USEF President Murray Kessler said.

“As we all know, real horses are extremely time consuming and expensive. However, stick horses require basically no upkeep and almost anyone can afford to buy, make and maintain one. We see recognizing hobbyhorsing as an official sport under the USEF umbrella as a way to expand our audience and allow many more horse enthusiasts to ‘Join the Joy.'”

In an article for National Post, hobbyhorse coach Taija Turkki is quoted to say, “It’s very bizarre for other people to see, for the first time especially, this kind of stuff … Because they think we think the horse is alive, which we do not. We understand that it’s dead, made of fabric and all that.”

An estimated 10,000 people in Finland are said to be involved in hobbyhorsing. And the activity means something different for each of them. Alisa Aarniomaki said hobbyhorsing is like therapy and has helped her cope with her parent’s recent divorce.

“I’ve gone through lots of trouble and I’m still struggling with some issues. It has helped me a great deal that I can occasionally just go galloping into the woods with my friends. It somehow balances my mind,” Alisa said.

And what horse person, hobby or otherwise, can’t relate to the incredible healing power of horses? We here at Nation Media fully support the development of hobbyhorsing and welcome it with open arms to the USEF table. In case you missed it, check out Kristin Kovatch’s editorial In Defense of Competitive Hobbyhorse on our sister site, Horse Nation. 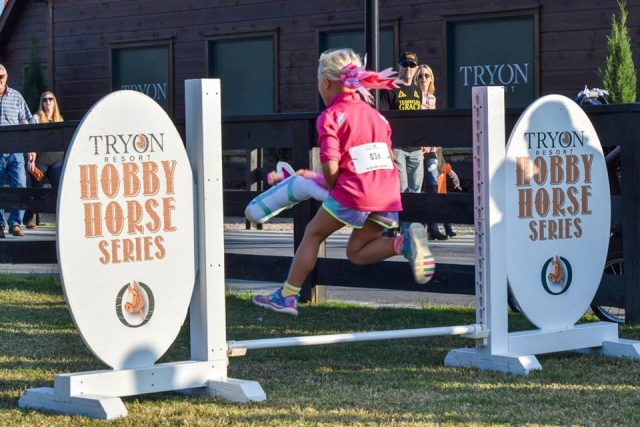 Hobbyhorsing has already made its way across the pond from Finland to North America. The Tryon International Equestrian Center in Tryon, NC hosted a hobbyhorse competition series last fall and plans to renew the series for summer 2018 ahead of the FEI World Equestrian Games.

Marketed as a “safe, fun and affordable way to ride horses,” the American Hobby Horse Series is for children 14 and under and offers multiple levels from cross rails to 2’6″. Special awards for Best Hobby Horse and Best Turned Out Rider are given each week and competitors try to accumulate points to qualify for the series championship.

“Hobbyhorsing is the next big thing,” said Mark Bellissimo, Managing Partner of Tryon Equestrian Partners. “It teaches kids about hard work and competition and expands their imagination through crafting and visualization. Plus, it’s great exercise and parents like it because it’s way safer than riding real horses.

“With the large expense and space requirements of equestrian competitions, especially eventing, there’s a real possibility that this is the future of the sport. Who knows, maybe one day TIEC will be hosting the FEI World Hobbyhorse Games.”

2018 will be a pilot year for the USEF Hobbyhorse program as the affiliate is created and organizers bid for competition dates. We know Chinch is especially excited, so stay tuned for the unveiling of our new sister site, Hobbyhorse Nation.

[Hobby-horsing is a popular sport in Finland. ‘It’s very bizarre for other people to see’]

[In Defense of Competitive Hobbyhorse]

[What is American Hobby Horse?]

……April Fool! USEF is not actually recognizing competitive hobbyhorse, but we love the sport and what it offers participants. Go hobbyhorsing!