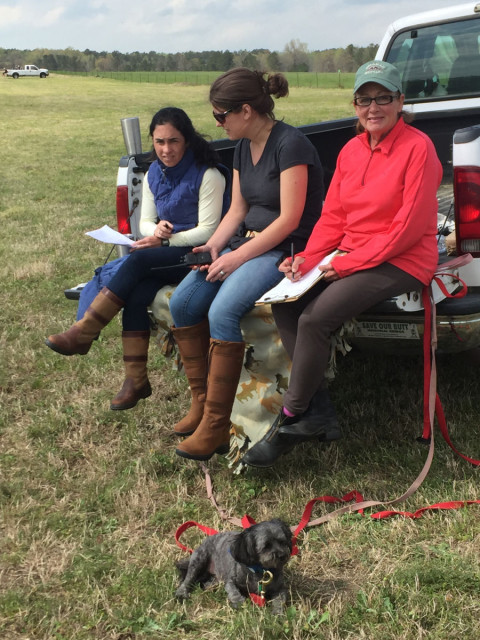 Susan Garbow has been a volunteer at Pine Top Farm in Thomson, Georgia ever since Glenn and Janet Wilson began hosting horse trials in 1992, but she’s been a member of the Pine Top family for much longer.

Janet and Susan have been friends for more than 30 years. They met while foxhunting with Belle Meade Hunt in Thomson. “I was just a little knucklehead. I didn’t know anything!” Susan laughed while we chatted over the phone. “I was just enjoying riding and being out there.”

The more she hunted, she and Janet, whose family was part of the Belle Meade staff, got to be good friends. Susan was unfamiliar with eventing at the time having always ridden hunter/jumper and foxhunting, but she soon started eventing and traveling to shows with Janet and her family. She also boarded her horses at Pine Top long before they ever began hosting events.

“I only did Beginner Novice, but we were having a good ol’ time!” Susan recalled. “Thank goodness I have good friends like Janet!”

Susan, a now semi-retired operating room nurse, doesn’t remember when she started volunteering, but Janet can’t remember her having missed many events. “If I say we have a show, I know she’s coming. She’s more than a volunteer, she’s part of the Pine Top family,” Janet said. “It means a lot because she’s an experienced horse person and I don’t have to worry.”

Susan’s medical profession also makes her a reliable set of boots on the ground. On every Pine Top Sunday, she can be found parked on cross country fence judging with her beloved canines, a husky named Greta (Garbow, get it?) and Teddy.

“It gives me confidence to watch. I’m so impressed by people who event. I know how hard it is. I did Beginner Novice but never moved up because I didn’t have the horse, time or physical fitness and drive those people had. I admire anybody that can ride like that,” Susan said.

“I like to see the older ladies, too. It does me good and gives me confidence. I watch them and go home thinking ‘Shoot! If they can do it I can do it!'”

Susan is inspired to get back in the saddle by the people she watches ride at Pine Top and wants to ride at the Thanksgiving Horse Trials this November with her Percheron/Thoroughbred gelding Mr. G. “My goal is to be one of the people who ride. One more time!”

We hope you accomplish your goal, Susan! Thank you for everything you’ve done for Pine Top eventing over the years.