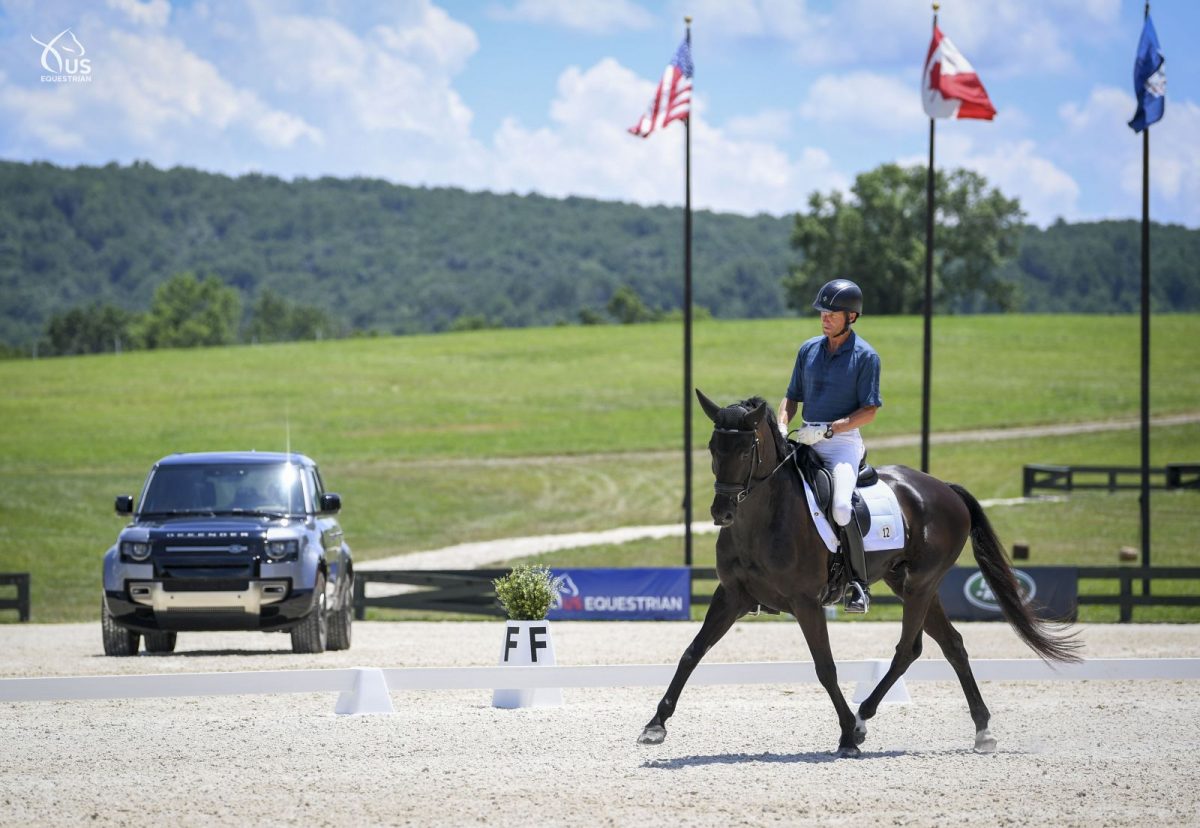 Boyd Martin and Tsetserleg. Photo by US Equestrian/Taylor Pence.

The shortened dressage test for the Olympics comes as an effort to make the phase more spectator friendly. Additionally for these Games specifically, where the summer heat and humidity promise to be formidable, the reduction of length will lessen the time the horses must spend working in the heat. To further alleviate any weather-related stressors, the dressage portion of competition will take place in the mornings and late afternoons, avoiding the hottest parts of the day.

This updated test also makes for a higher level of pressure on the riders. While the whole goal was to make the tests happen quickly – which is great for the sport – as a rider it’s easy to get behind and very difficult to catch back up. You’ll have a hard time preparing for the next movement if you’re still surviving the last movement, so this adds a lot of mental pressure for these riders.

Here’s a link to the test sheet. To follow along with the test while you read, a view from A of Team USA members Doug Payne and Vandiver is embedded below. There are a few other views of this test further down, but this will give you the best angle from which to see the movements.

The thing here is that most upper level horses expect to halt a I in these tests. They will be schooled on this test, of course, but they still have quite a bit of expectation coming into the ring. So while the horse may be anticipating a halt, riders know they’ll need to ask for a ‘bright’ trot. This is where the judges on the side of the arena will be able to differentiate if the horse is slamming on the brakes and dropping into the trot versus reading the rider’s mind. This is still a collected trot, but this is a chance to put on your horse’s fanciest trot to really ‘razzle-dazzle’ the judges in those first few seconds.

Movement 3:
Transitions at M and K

Here, the rider gets to really go for it early with the extended trot. That’s actually going to be easier for some riders than a test that has a halt on the first centerline. Most of the time, you halt at I so you don’t have much time to get the horse going. So I think this will help a horse that doesn’t have a great extended trot; they will get themselves feeling more like they already have a flow versus stopping and starting.

Also notable here is the fact that the transitions in and out of the extended trot are scored on their own. So, while a pair could have a brilliant trot in the middle, a good score can be marred by lower marks on incomplete or unclear transitions. They will judge on how the pair goes in and comes out of the extended trot, and this is a score that will help separate the cream from the crop.

Movement 4:
After A: Turn down quarter line, shoulder in left

This being a movement coming down toward the judges, riders will feel like all eyes are on them. This is the harder direction to start with because there’s not much room for error. All three of the judges will be staring, up close and personal!

The halt and rein-back is always challenging. As a rider, you never know how much to practice this, as you don’t want the horse to anticipate but there’s also the fear that they’ll cross their jaw and stick their head up in the air.

Especially at this level, the dressage is a true five-star so every little piece counts. The rein-back should look like a trot in reverse: diagonal pairs, toes off the ground, the horse staying forward and up to the contact while going in reverse. The horse isn’t supposed to drop its head and poll down. This is a place where if you don’t have the fanciest horse there’s a possibility to get 8s, 9s, even 10s, making this a very important movement for our steady, workmanlike horses.

As an aside, this is probably the one place in the test where these pairs will get to take a breath!

Here’s something that I don’t believe I’ve seen in a dressage test, at least not in recent memory: going from a half-pass to a shoulder-in. This is a difficult movement – it might work well for some riders that you’ll be going away from the judges here!

For this movement, the judge at H won’t be a friend because they’ll be able to best see how well the rider holds the line. If the rider can get out of the rein-back nicely, they’ll get to use the corner to get started before departing for their half-pass at M. If they don’t get the necessary angle in the half-pass, they’re going to need a sharp half-halt and then almost halt the horse on those aids to create a shoulder-in. They will really need to get the horse to sit and wait in order to bring the shoulder around. All of this makes this movement exceptionally tough – it’s really a unique movement of its own. For certain, this will have changed the way some of these riders are practicing at home!

Any time you have to walk in this sort of atmosphere – even without spectators – it’s just tough, especially for these event horses. Riders will want to work to show relaxation and that their horse can have a nice, big stride. Hopefully, the walk comes as a reward for the horses who are staying on the aids. Unfortunately for our event horses, this is often the first place where they begin to get tense, anticipating the canter work when the rider begins to gather the reins. This anticipation will become an even more important factor for the next movement.

What the horse doesn’t know is that they’ll be picking up the “wrong” lead. This is something everyone will be schooling. This was quite clever on the test writers’ part; talk about needing to have the horse on your seat! And not only this, but you have to be able to go right into your changes. Riders will want to feel they have confidently picked up the canter, able to ride through the corner and turn to prepare for that first lead change. Riders feeling like their connection is fragile or their horse is still behind the leg from the transition will have difficulty making their first change clean.

Now, these aren’t tempi changes because there is no explicit requirement for the number of strides between these two changes. I’m hopeful that this will reward better riding and better horsemanship because a rider is able to ride the best stride for their horse, not trying to crank or push for a set stride.

All eyes will be on these movements and they will be very exciting for the horses and riders. While you’re watching at home, watch for the riders who move their bodies the least during these changes. You’re going to see some people collect in between and others gallop in between. If a rider flubs the first change, it’s easy to get desperate and, as a result, crooked. Riders will want to focus on keeping their hands in front and a straight line so they can nail their second change. Here again is a benefit of not having a set number of strides; a rider can adjust according to their horse to have the best shot at a clean second change.

The rest of the test is where we see elements that we’re traditionally more used to seeing at this level. Here, riders may have a horse that just got excited by the changes, requiring some thought about how to ask for the final change. Again, the test puts a lot of pressure on both horse and rider because there’s essentially no downtime. If you think about the standard 5* test, you at least get a stretch circle in the middle of the canter work. In this test, there is no moment like that.

These final changes might feel a little calmer compared to the first set. Riders will breathe a little sigh of relief that they can use the bend from the half-pass to facilitate the change, as opposed to the changes on the straight line that are much more reliant on the rider’s hips and seat.

There is some mindset that the extended gallop can be a bit of a release for an event horse. But some of these riders will have a horse that’s gotten a bit lit up and will need to err on the conservative side here. The best bet for a good impression is to go for as much ground cover as possible.

Riders will want to use the 10-meter turn onto the center line to help get the horse sitting and ready to make one last great impression. Now’s the chance for the rider to breathe – and try to remember what on earth they just did in those intense few minutes!

As judges, we’ve been marking using just the harmony score for a few seasons now. It’s quite nice, honestly, and I feel it levels the playing field away from subjectivity and bias by asking one simple question of whether or not the horse showed a confident partnership. To score well on this collective mark, you don’t have to have the fanciest horse. With this change, a horse that might not have scored well on the collective mark for gaits or a rider that is not quite as polished still have a chance to earn a high mark here if they can display that their partnership adheres to the scale of training.

This collective mark really brings to light the big picture, emphasizing the importance of the scale of training. Horses should be allowed to do dressage, not made to do it. This mark is a way of underscoring this concept.

In all, this should be a really entertaining test to watch. As viewers on the live stream, remember that the camera angle isn’t always showing you what the judges are seeing. The coverage is presented to show the prettiest picture, maybe not the most technical aspects of what the judges are supposed to be weighing.

This is the Olympics. A fraction of a point will determine medals. Look for the riders with quiet hands, who use their seat and legs with a listening horse. It’s just so satisfying to watch someone who rides like this. I’m particularly excited to watch Michael Jung and fischerChipmunk FRH. That horse is incredible and I think it’s fascinating that he was first brought on by Julia Krajewski. I think it’s incredible that Chipmunk has competed so brilliantly with her and now seems to have the same relationship with a different rider. It’s a testament to both riders and also to a very special horse. 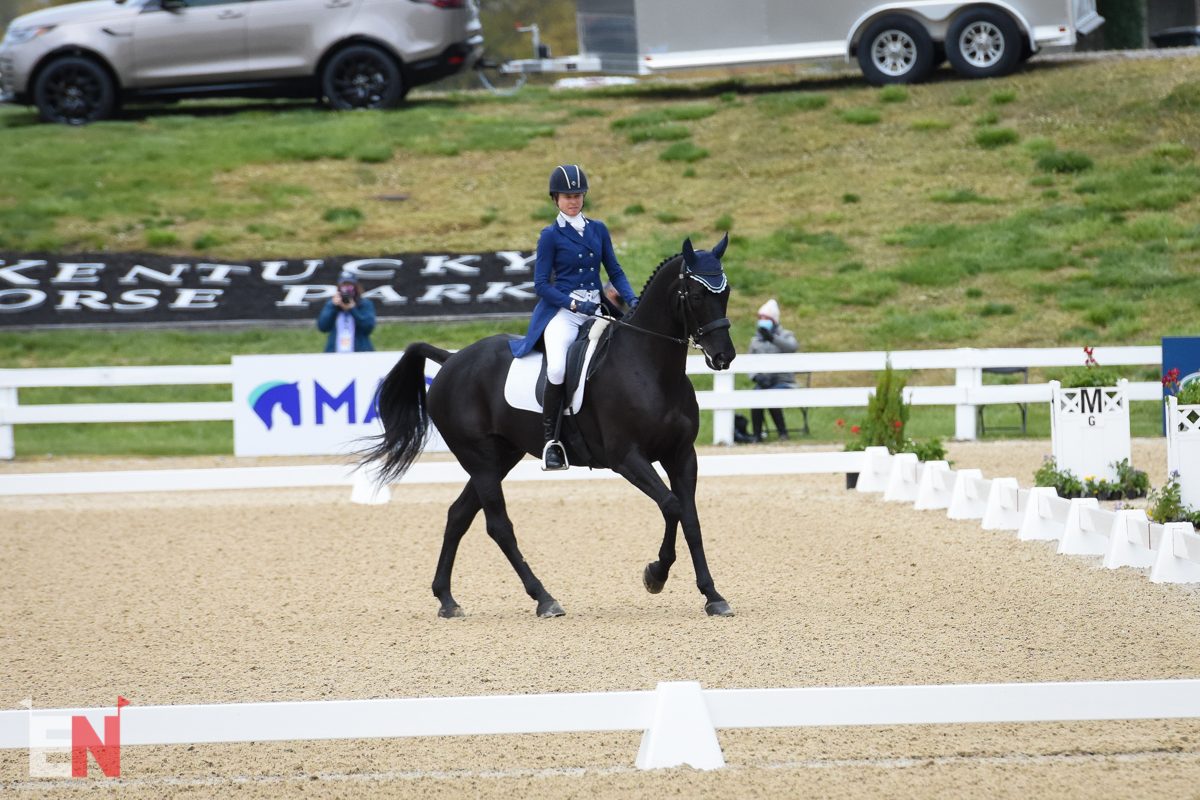 When she’s not competing with her top partner, Favian, coaching students under her Blue Clover Eventing moniker, or bringing along young horses, Valerie VIzcarrondo Pride can be found in a judge’s box handing out dressage scores. Valerie is an “S” certified USEF National judge, a Level 2 FEI dressage judge, and is currently in the process of obtaining her Level 3 certification. Blue Clover Eventing is based at Sudley Farm in West River, Md. To learn more about Valerie, visit blueclovereventing.com.