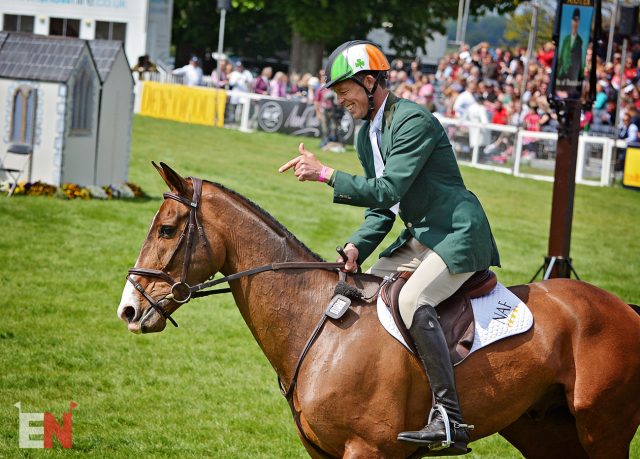 Jonty Evans and Cooley Rorkes Drift after jumping a clear show jumping round at Badminton 2017. Photo by Jenni Autry.

It is a very happy day for eventing fans around the world, as people from far and wide all banded together to raise the £500,000 needed to help Jonty Evans keep his Olympic mount Cooley Rorkes Drift.

The final few thousand pounds needed to prevent the horse from being sold were secured in the early hours of the morning U.S. time, well over 24 hours ahead of the official deadline to raise the funds.

Jonty is expected to make an official statement soon. He tearfully told BBC Gloucestershire: “I’m struggling to put it into words really. I cannot thank people enough for getting involved and believing that this could happen because without the crowd and without the donations, we’d never have made this happen.

“The fact that Art is going to stay with us now and this will be his forever home is a really, really, really special thing. People have done it for us.”

Jonty launched his crowdfunding campaign on July 13. In addition to an online auction that raised £37,000, two large lump sums of £150,000 and £100,000 were donated, with people from around the world donating the remaining £213,000 at jontyandart.com over the next four weeks.

Thank you to ALL who donated to keep Jonty and “Art” together. Now they will embark on their trip to Poland to represent Ireland in the FEI European Eventing Championships at Stzregom next week.

Stay tuned for much more as we follow Jonty and Art at Strzegom and beyond. Go Eventing. #artisawesome