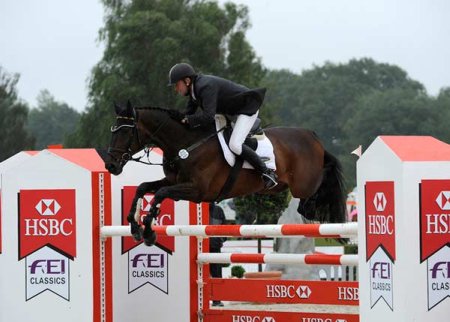 Good Morning Eventing Nation, and welcome to the half way mark of another busy week. It’s already August, which means Richland, Burghley, the AEC’s, and all the other fun fall events are just around the corner. Speaking of the AEC’s, I hope you were more on top of things than myself and sent your entry in by yesterday to get the $100 Early Bird discount. I’ll have to remember that next year, but it really is a good incentive put on by the USEA to get those entries in early.

Probably the most exciting news of the morning is contained in this article from a German Eventing site, stating that Andreas Dibowski’s top mount, Euroridings Butts Leon, has been sold to US based Thai Eventer Nina Ligon. Butts Leon is certainly one of the most seasoned and successful event horses in the world right now. His competition record is like a ‘who’s who’ of the big events– he competed at the 2008 Beijing Olympics, finishing as part of the Gold medal team, he was second  at the 2010 Aachen CIC***, 2nd in the 2009 Luhmuhlen CCI****, won at Luhmuhlen this year, was 2nd at Badminton in 2010 at Badminton, and competed at the 2010 WEGs. The short list for Nina’s Olympic Prospect has just gotten a lot shorter as a horse like Butts Leon really has no competition. Congrats to Nina on her new purchase, I know I’m looking forward to seeing this pair in action!

To start the morning off on a good note, here’s an article about the recent wedding of your favorite British royal, Zara of course. She said about her wedding: “Truthfully, I don’t know when I’ll take my honeymoon. We both work so hard we may have to wait until we’re both retired. That’s just what we do. Isn’t that just what everybody does?” If that is really ‘what everyone else did’, we would have surely solved all the world crisis’ by now and society would just be peacefully humming along. If only (sigh).

The newly released documentary of the legendary American race trainer, Buck Brannaman, has been receiving excellent reviews. The film was released in the US on June 17, and has been shown in several theaters along with being made available for private group screenings. [Horsetalk]
Mongolia seems like a world away, but with the recent outbreak of the Equine influenza epidemic, the distance between here are there starts to seem a lot shorter. The Mongolian government confirmed yesterday that the disease is already in fourteen provinces, but an additional four provinces have suspected cases of it as well. One of the biggest problems with the spread of this virus is that fact that many rural parts of Mongolia are relatively uneducated about horse care and veterinary protocol, and still rely on horsepower as part of their livelihood. Without their work horses, farmers are no longer able to do many of the labor intensive parts of the planting and harvesting. With the harvest season approaching, this outbreak could mean serious trouble for Mongolian citizens. Let’s hope this outbreak gets under control shortly, and that life soon returns to normal for our Mongolian friends. [Influenza Outbreak]
In some better news about the world state of horse heath, the first Hendra quarantines have been lifted down in Australia, and authorities are quietly optimistic that the disease will be under control soon. According to the article, “Quarantine restrictions are only lifted after the completion of three rounds of testing over a 32-day period, with all tests results returning negative results for Hendra virus.” The two main areas battling the disease right now are Queensland and New South Wales, 81 horses are currently being monitored in one central area until they are certain to be virus free. [Horsetalk]
Best of the Blogs:
Tied for 1st:  Rest in Peace Weathermark and Fletcher Indy Winner
Tied for 1st: Road To NAJYRC: Alexa Ehlers, Part 3
Tied for 1st:  Cupcakes, Beer, and a Gag bit
And finally, here’s one cool video and note from reader Jess to watch before you start off for the day.
From Jess:  “I just wanted to drop you a quick note about my YouTube series, The Quest For a Champion, I am currently training three rescue thoroughbreds, and am documenting the progress along the way. I post up an new video each week, and mix fast paced eventing with awesome dubstep. I also do some dressage from time to time.”
That’s all for now, Eventing Nation! Have a great day, I’m sure I’ll see you shortly.