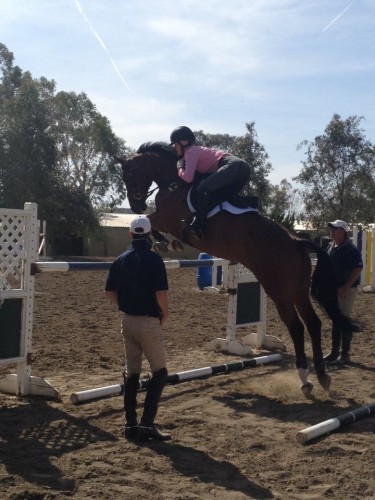 Good morning EN! The High Performance social media team is at it again this week, providing updates from lessons with David out at Galway Downs. Today riders will again have the chance to get in one last training session before the event begins this weekend. MacKenna and Landioso, pictured above, will be competing in the CIC3* along with Hawley Bennett-Awad, Kristi Nunnink, James Alliston, and many more. Check out the USEF Facebook page for more photos and information. [USEF High Performance]

The inaugural Chattahoochee Hills Country International Horse Trials will run from May 17-19 this year. The competition will feature a CIC3* for the first time at Bouckaert Farms, where last fall’s American Eventing Championships also took place. “Our goal is to showcase the historic equestrian Olympic sport known as eventing or as an equestrian triathlon, as a true festival in the country, while introducing it to new fans and emphasizing its uniqueness with new added entertainment and amenities,” says Michael Pollard in a press release posted on the USEA website. Check out the CHC website and Facebook for more information about the competition. [CHC International] [CHC Facebook]

The Germans won the first leg of the FEI Nations Cup Eventing at Fontainebleau. To no one’s surprise the Germans led both the team and individual competition at the French event, where top pair Michael Jung and La Biosthetique Sam won the CIC3*. Apparently there were only five double clear cross country rounds in the three-star, and two of them came from Jung. France placed second in the team competition, and the Italians rounded out the top three. The next leg of the Nations Cup takes place in May at Houghton Hall in Britain. [FEI Press Release, via USEA]

Rest in peace William Miflin. Miflin, 44, was a popular event rider-turned-coach in Britain. He was shortlisted for the Barcelona Olympics in 1992 and longlisted for the Atlanta games in 1996.  In 1997, he was awarded the Armada dish for five Badminton completions, all achieved with mount Passadena II. He died on Saturday after fighting cancer for several years. EN sends our deepest condolences to his family and students. [Horse and Hound]

Thehorsepesterer was at Southern Pines last weekend capturing rides in all three phases. Below is a video of Sharon White and Don Sheffield tackling the Intermediate water complex at the end of the course. Check out Thehorsepesterer’s channel for more videos.