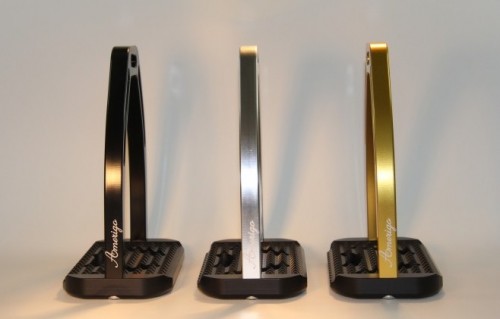 A side view of Amerigo's snazzy new stirrups

Did you miss yesterday’s big news? It’s officially a contest week on EN! Amerigo has released a new model of stirrups (pictured above) that retail for an impressive $285. Thanks to our generous sponsor World Equestrian Brands, EN will be giving away a pair to one lucky winner next week. Enter to win by creating your own stirrups and sending us a photo by next Monday, November 25. Our top picks will be posted and a reader’s choice poll will determine the winner. So the more creative the submission, the better your chance of winning! Click to check out more photos of the stirrups in action and further contest submission details. [Make Your Own Stirrups Contest]

Buck Davidson and Jan Byyny’s Inmidair top the 2013 PRO Series Leaderboards. Buck won the Rider Leaderboard title for the first time, beating out second place finisher Will Coleman after a successful trip to Galway Downs. Inmidair took home the My Boy Bobby PRO Tour Series Horse Leaderboard Award for the first time as well, a feat Jan did not expect after the horse’s struggle with breathing problems. “He’s really overcome a lot this year,” she said. The two riders will accept their awards at the PRO Awards Reception at the USEA Annual Convention on December 6. [PRO]

Rising star Meghan O’Donoghue has been awarded this year’s Amanda Pirie Warrington Grant by the USET Foundation. The grant was endowed in memory of Amanda by her family “with the purpose of helping provide financial assistance to an event rider who has been identified as a rider with great talent and ability to represent the United States in the future.” As the grant recipient, Meghan will receive $5000 to help offset training expenses in 2014. [The Chronicle]

Planning a trip to next year’s WEG? Passes allowing access to several events are now on sale. This is the second batch of tickets (though the first that is available to the public), and it officially went on sale on Monday. 15,000 tickets will be sold in this batch, available until they run out or until March 3, 2014.  After that a third batch, which will be individual event tickets, will go on sale March 4. [British Eventing] [Official WEG Ticketing Website]

British Eventing’s inaugural cross country Course Design Scholarship has been awarded to Lucy Wiegersma and Angus Smales. The scholarship was endowed with the goal of aiding budding course designers who may not have the support, connections, or financial backing to pursue their interest in course design. The two candidates were chosen after a day of interviews and assessments, and will receive mentoring, free access to training sessions, design opportunities, and some financial support thorough 2014. [Horsetalk]

Charlotte Dujardin has been named as the 2013 FEI Reem Acra Best Athlete. Charlotte had another banner year with her star mount Valegro, winning two individual golds and team bronze at the European dressage championships in Herning. They also set a world record at the same show after scoring an unbelievable 91.250 in the freestyle class. As if that isn’t enough, Charlotte also finished on top of the FEI world dressage rankings this year- a position she has held seven times. She was presented with the well-deserved award at the FEI awards ceremony, which took place on November 7 in Switzerland. [Horse & Country]

This week on the Eventing Radio Show: Marcia Kulak and Allison Springer. Marcia joins hosts Samantha and Jess to talk about the Triple Crown Scholarship and this year’s winners of the Bridging the Gap scholarship. Later in the show Allison joins in to discuss her new mount Lionheart and his journey to the U.S. [Eventing Radio Show]

Do you find yourself picking hay off of everything you own? Then you will appreciate this article from TheHorse.com, entitled, “The Top 10 Goofy Places I’ve Found Bits of Hay.” [The Horse]