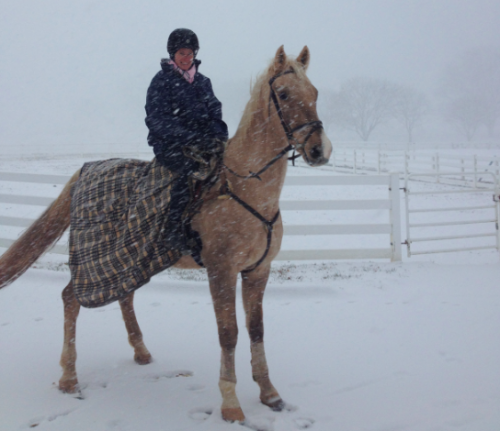 Kate Chadderton sent us this photo of herself on one of her mounts in MD yesterday just before leaving for a visit to Australia. I think I can speak for all of us in saying that I wish that I could go somewhere summer is just beginning!

Good morning EN! Have you made it through the big freeze? It seems like the Floridians are the only ones who have escaped the cold over the past four days, while snow and ice storms have hit everywhere from Texas to New York. Luckily, judging by national weather maps, things will be warming up for a lot of the country tomorrow with the exception of the northern Great Plains states. Need inspiration to get out to the barn? Check out both Kate and Lila’s posts about surviving cold winter temps without losing all motivation. [Kate’s 9 Ways to Survive the Winter] [Lila’s Winter Coping]

The USEF has announced the dates and locations for the 2014 USEF Eventing High Performance Training Sessions. The first session, taught by David O’Connor, will be for both the Eventing 25 and High Performance riders and take place in Temecula, CA. After that initial session there will be at least one session per week through March. They will be hosted in a variety of locations, including Aiken, Southern Pines, Ocala, and even two in the UK. Those who wish to audit should email Bryn Wells at [email protected]. [USEF Press Release]

Colleen Rutledge will be teaching a clinic in Lexington, KY on February 1-2. Interested in attending? Email Daina Kaugars at [email protected]

The USEA has announced the creation of an equine research initiative to support the health care of equine athletes. The initiative, announced at the Annual Meeting last weekend, will be a partnership with the Morris Animal Foundation and will seek to address the significant lack of funding for equine medical research. The USEA has pledged $1 per starter to the initiative, which will equate to roughtly $40,000 per year. The Morris Animal Foundation will help distribute and monitor the funds. [USEA]

Public nominations are now open for the 2014 Equine Online Equestrian Social Media Awards. Interested in nominating your favorite equestrian blog (ahem!) for an award? Fill out the nomination form on ESMA’s website before the deadline of December 20. Click to read a full rundown of how winners are chosen for each category. [Equine Social Media Awards]

This week on the Eventing Radio Show: 2013 in review. David O’Connor, Joanie Morris, and PRO rider Robert Meyerhoff join hosts Samantha and Jess to discuss 2013 and how it turned out for American eventers. In addition, there is discussion of the USEA Annual Meeting and Convention. [Eventing Radio Show]

Thinking of selling an old saddle on eBay? Read this first! Stacey Kimmel-Smith recounts her horrible experience with selling tack on the online vendor, even after ten years of successful eBay sales. She learned that sales histories have no weight in disputes, that photos cannot be used as evidence, and that a “no returns” policy means the buyer will pretty much win every claim. Caveat Venditor, EN. [Horse Nation]

Ever wonder how big events attract big sponsors and vendors? Check out this promotional video intended to inspire future sponsors created by the organizers of The Blenheim Palace International Horse Trials. It features short interviews with actual sponsors as well as the CEO of British Eventing, Mike Etherington-Smith.