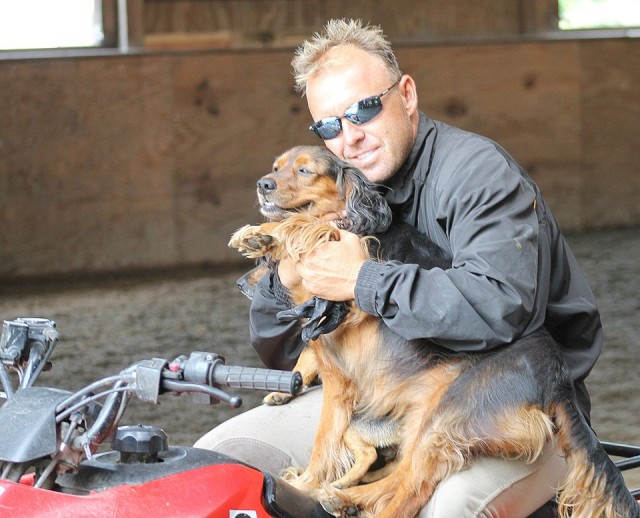 Clearly the secret weapon behind Buck's inhuman show schedule is snuggle time with his pup. Thanks to Helene Gallagher for the lovely photo.

Yesterday Sally wrote a great article — complete with diagrams from Lindsey — about how Buck manages to ride 10+ horses at an event and still stand at the end of the day. Besides having an amazing team behind him, he is clearly the epitome of a professional athlete.  Those of you that dream of the day that you can be just like Buck should check out a new and super exciting contest that Horseware Ireland just announced. The company is looking for a Horseware Grassroots Rider to join its Riders Team for 2014. Open to anyone 16 or older, the winner will land a €10,000 sponsorship deal for a year with Horseware. Click to read more about the contest and find information about entering. [Horseware Ireland]

The FEI has announced the officials for this summer’s WEG in France. Each discipline has a different team of officials, and Europeans are heavily favored on the Eventing jury. The President of the Ground Jury, Australia’s Gillian Rolton, will lead  Ground Jury Members Alain James (FRA) and Ernst Topp (GER). The TD will be Great Britain’s Alec Lochore, and the Assistant TD will be Ataide Pereira from Brazil. Click for a full list of the officials that will be presiding over each discipline. [Horsetalk]

Meet Bailey Moran, a rising professional eventer from Texas. 18-year-old Bailey just graduated from high school, scored her first sponsor, and won both a Prelim and Intermediate division at Rocking Horse Winter I last weekend. Keep in mind, this was only Bailey’s second Intermediate run with her mount Loughnatousa Caislean, who she calls the “light of her life.” Click to read more about Bailey and how she managed to solicit her sponsor (Majyk Equipe) totally on her own. [COTH]

Will O’ Wind Farm will be the cross country venue for the 2015 Pan American Games. The games will take place in Toronto, and the farm is located nearby in Mono, Ontario. The course itself is equivalent to a CCI2* and will be designed by Wayne Copping. Dressage and jumping events will take place roughly 30km away at the Caledon Pan Am Equestrian Centre. [Horse Canada]

Calling all graphic designers: SmartPak is hiring! I’m mainly posting this because I wish I was qualified for this job, as working at SmartPak seems like it would be such a great deal. Click to read more about the job and its requirements, as well as to find information about the application process. [SmartPak Blog]

Eventing Nation has been nominated for two Equestrian Social Media Awards! Go vote for us in categories #14 and #15, Best Blog and Best Social Network. [ESMA Voting]

Iron Spring Farm has been named the USA’s top dressage breeder by USEF.  Breeders are ranked by totaling the points their horses earn in licensed USEF breeding competitions, and Iron Spring Farm had multiple horses that accrued points for the title last year. One of the farm’s star earners is Darling ISF, who was named Mare Champion and the GAIG/USDF Breeders Mare Champion at the 2013 NEDA Fall Festival. [Horsetalk]