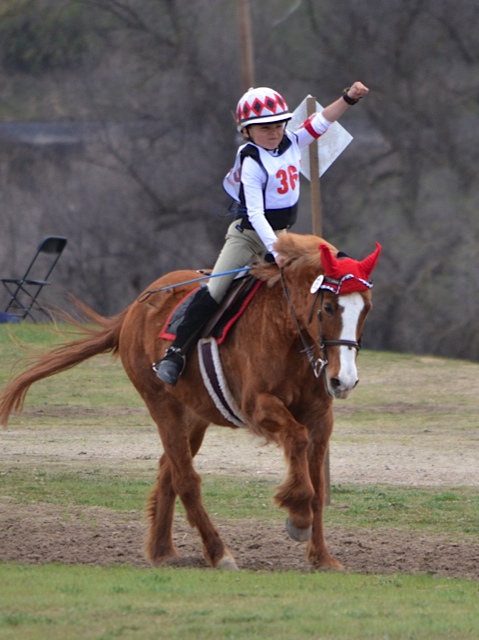 It's not from the CIC event, but it's my favorite Twin Rivers photo and it's worth reposting: Taylor McFall celebrates her second place finish in March 2013 on Mighty Maybelline in the Intro division at Twin Rivers. Photo by Jenny McFall.

Zara Phillips will compete for the first time over Easter weekend since giving birth to her first child, a daughter born on January 17. Zara has seven horses entered in the Symm International Horse Trials, ranging across the levels. She will be campaigning her Olympic partner High Kingdom in the Open Intermediate, along with another horse named Black Tuxedo. [Horsetalk]

Philippa Humphreys has acquired Sir Donovan from Peter Barry.  Sir Donovan competed through the four star level with Katie Frei before being sold to Peter last year, and Boyd Martin had been campaigning him this spring until he broke his leg at Carolina International. We broke the news on the sale in this post last week, and the Chronicle also has a story on it this week. [COTH]

This week on the Eventing Radio Show: Mentors and their Students. Samantha and Jess talk to Kyle Carter and Karen O’Connor and their respective students, Libby Head and Lisa Barry. Sinead Halpin also stops by to give a news update, and this week’s training tip comes from Allison Springer. [Eventing Radio Show]

Check out Lauren Kieffer on the cover of the April/May issue of The Arabian Sport Horse. The magazine featured Lauren, who has competed several Anglo-Arabs, in an article this month. You can see the photo and read the whole article for free by clicking the link. [The Arabia Sport Horse]

This week on the SmartPak Blog: Horse Insurance 101. While no one likes discussing worst-case scenarios, SmartPak has put together this helpful post about the basics of horse insurance. It covers mortality and major medical insurance policies, as well as several important points to think about when shopping around for the ideal plans. [SmartPak Blog]

Help Young Rider Sarah Braun with the cost of her Young Rider mount’s colic surgery. Sarah’s mount Candy, who carried her to a team gold medal at the NAJYRC, underwent colic surgery on March 1. Sarah’s insurance is only covering a portion of the costs, and she is seeking donations to help her cover some of Candy’s remaining expenses. Best wishes to Candy and Sarah as they go through the recovery and rehab process together. [Candy’s Surgery Fundraiser]

Best of Blogs: Ellen Doughty blogs about how she is using her USEA-awarded training grant

Today’s video comes from RNS Video, and it is a supercut of the CIC3* water at the Fork last weekend. You can see a lot of upcoming Rolex combinations practicing their corner skills!