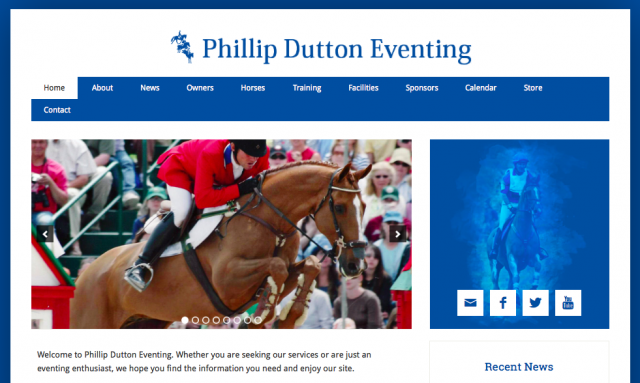 Part of the homepage of Phillip Dutton's new website.

Good morning EN! Check out the above screenshot, which comes from the homepage of Phillip Dutton’s brand new website. Designed by EN friend Athletux, the site looks pretty snazzy and has lots of great information about Phillip’s services, facilities, equine partners, and past accolades. Click to check out the full site in all its glory. [Phillip Dutton Eventing]

FEI President Princess Haya’s husband, Sheikh Mohammed, will be barred from funding an international task force that aims to “clean up” problematic practices that have arisen in Endurance. In addition, two of his senior employees have been dropped from the newly-announced task force. The announcement of Sheikh Mohammed’s diminished role comes after both the Dutch and Swiss equestrian federations criticized “what they called ‘collaboration’ between the Sheikh and the [FEI],” according to the Telegraph. Sheikh Mohammed was suspended for doping for six months in 2009, and more than 24 horses from his stables have tested positive for drugs in the past. [The Telegraph]

The FEI is allowing athletes to vote for the direct election FEI Technical Committee athlete representatives for the first time. Each sport governed by the FEI has a respective FEI Technical Committee, and athlete representative candidates submitted applications for the election earlier this year. Karen O’Connor has put her hat in the ring to run for a position on the Eventing committee, and she is the only US candidate on the Eventing ballot. Only FEI registered athletes 18 years and older who are included on their sport’s respective Ranking List as of December 2013 are eligible to vote. Voting opened yesterday and will run through June 1. [FEI Athlete Elections 2014]

This week on the Eventing Radio Show: A Rolex preview. Hosts Nate Chambers and Joe Meyer are joined by guest co-host Max Corcoran to preview Rolex. Competitors Sharon White, Michael Pollard, and Kevin Keane join in to talk about their preparation for the event. [Eventing Radio Show]

Don’t forget to vote for your favorite creative interpretation of the EN logo! There are three finalists, and the winner will receive two four-day passes to Rolex next week. Voting closes at 10PM tonight, so get those ballots in! [EN Logo Rolex Pass Contest]

This week on SmartPak’s Ask the Vet: Can you combine supplements? A reader writes to Dr. Lydia Gray to ask about combining her horse’s supplements together in several days in advance of feeding in order to better organize her feed room. After consulting several specialists, Dr. Gray advises that combining supplements is not a good idea, as different compounds could interact with each other over time and render the individual supplements less effective. Click to read her full explanation. [SmartPak Blog]

Today’s video comes from Horse Nation, and features a new occupation for OTTBs that I bet you’ve never heard before: Rhino conservation.