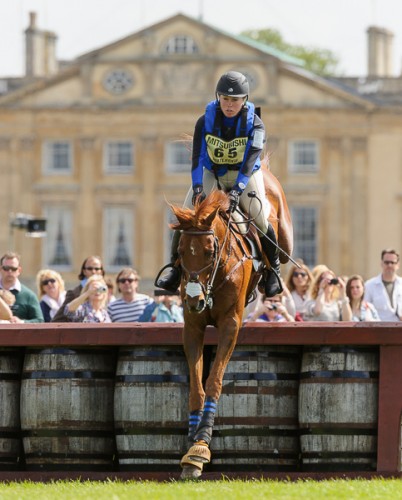 Colleen Rutledge and Shiraz at Badminton in 2013. Photo courtesy of Nico Morgan Photography.

Good morning EN! While we are all still digesting Rolex Kentucky results, those across the pond are gearing up for the next four star on the list: Badminton, which kicks off next week. The Badminton Facebook page is posting nearly daily updates about changes to the entry list. Yesterday Sam Watson withdrew Horseware Bushman and has been replaced by Neil Spratt and Upleadon from the wait list. Pippa Funnel & Or Noir de la Loge have also been accepted from the wait list, meaning that she will have to choose two of three entered horses (previously entered: Billy Beware & Redesigned). Other changes include the withdrawal of Irish Olympian Aoife Clark and Fenyas Elegance, and the addition of another Irish Olympian, Austin O’Connor, aboard Ringwood Mississippi. Check the Badminton Facebook page for the latest updates. [Official Badminton Horse Trials Facebook]

Princess Haya’s campaign to remove term limits for FEI presidents has been victorious after a landslide vote in favor of her proposal.  According to The Telegraph, Princess Haya said, “I’m very honoured for the opportunity to be available as a future president of the FEI for a third term. I don’t want to go further than that because there’s the possibility there’ll be other candidates.” Her statement comes after she previously insisted she would retire this December.  Member nations voted 103 to three in favor of allowing her to run for another term. Holland, Lichtenstein and Switzerland opposed. [The Telegraph]

Boyd blogged about his experience at Rolex as a spectator. Though he was disappointed at first to not be riding, once he arrived he “enjoyed the weekend immensely” and stayed busy coaching, watching Trading Aces, and catching up with sponsors. [Boyd and Silva Martin]

It’s fly season, and SmartPak has you covered. Literally, in some cases. Check out this helpful list of must-haves for summer fly control, compiled by the knowledgable staff at SmartPak. Their fly sheets ship free right now! [No Fly Zone]

Don’t forget to get your entries in for the Design Your Dubes contest! Celebrate the $20,000 Dubarry Nations Team Challenge and design, draw, fake, bake or otherwise create the ultimate nation-themed Dubarry boots. If readers love your boots best, you get brand new pair. The deadline for entry is today, April 30, at 11PM. Click for the full rules and a link to the submission form. [Design Your Dubes]

Best of Blogs: Sophie Jenman is gearing up for her first Badminton with Geronimo, and is blogging about her preparation for Horse & Hound. [Nine Days to Go]

Rest in peace Kibah Tic Toc, Australian eventing legend. Kibah Tic Toc carried Matt Ryan to double gold at the 1992 Olympics in Barcelona, and placed second at Badminton in 1995. He was euthanized on Monday at the age of 36. His half-brother, Kibah Sandstone, took Ryan to another team gold medal at the 2000 Sydney games. Both horses were bred by the late Australian Olympian Bridget “Bud” Hyem.  [Horsetalk]

Check out this video of a 1992 newscast featuring Kibah Tic Toc and Matt Ryan’s winning show jumping round at the Barcelona games. Bonus footage of the 1960 Olympics at 1:40!