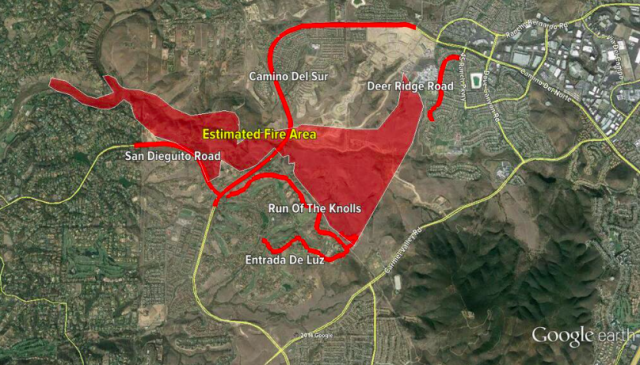 Map of the fire area as of yesterday evening. Photo from CBS San Diego's Twitter.

Good morning EN, today we are sending all our thoughts and well-wishes to those affected by the Bernardo Fire near San Diego. As The Chronicle reported yesterday, several horse farms in the area have already evacuated as a precaution, including Steffen and Shannon Peters’ Arroyo Del Mar farm. Shannon Peters told The Chronicle that they moved their 65 horses to the nearby Del Mar racetrack until the fire is under control and the danger has passed. As of last night, the fire had engulfed roughly 800 acres and was less than five percent contained. Updates can be found on KPCC’s Fire Tracker.

Flora Lea Horse Trials in NJ (scheduled for May 24,25) is accepting post entries. From organizer Debbie Adams: “We have terrific footing and quality XC fences making for an ideal one day experience for horses and riders at each level.  This family run event has been offering the sport every year since 1975!  Offering competition at Prelim and Training on Saturday and  Novice and Beginner Novice on Sunday.”

Royal eventer Zara Phillips made an appearance at the opening of Warwickshire College’s new state-of-the-art Equine Therapy and Rehabilitation Centre.  The facility will offer the UK’s only water treadmill to assist with rehabilitation, as well as hydrotherapy spa, treatment bays and new stables. Click to see photos of the new center. [Leamington Observer]

Reminder: It’s time to vaccinate your horse against mosquito-borne diseases. Recommended vaccines include those for West Nile virus (WNV) and Eastern equine encephalitis (EEE), both of which are most often transmitted during the summer months when mosquitos are active. You can also take steps to reduce the mosquito population around your farm by eliminating stagnant bodies of water. [The Horse]

Two British equine organizations, World Horse Welfare and the British Equine Veterinary Association, have come out against the EU’s new draft proposal for equine passports. The passport system proposes that all horses must be microchipped and that anyone who accepts the carcass of a dead horse must check its electronic ID before taking the body. Intended to protect the food chain, BEVA argues the new rules as written will lead to the same problems that already exist. [Horsetalk]

This week on the Eventing Radio Show: Sam Griffiths and Buck Davidson. Fresh off their respective wins at Badminton and Jersey Fresh, Sam and Buck join hosts Joe Meyer and Nate Chambers to talk about their victories. Max Corcoran guest co-hosts, and and Sham Wordley gives this week’s training tip. [Eventing Radio Show]

Today’s video features Sharon White and Under Suspection storming around the Jersey Fresh CCI3* course. Thanks to RNS Video for the link.