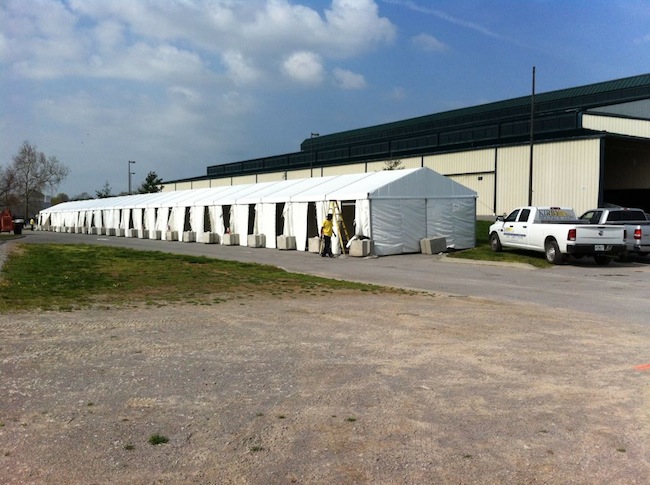 The Rolex Trade Fair is being assembled, photo via the RK3DE Facebook page

It’s almost here: one week from today Rolex officially begins with the first horse inspection and as you can imagine preparations are in full swing at the KY Horse Park. According to the Rolex Kentucky official Facebook page, tickets for Rolex stadium seating on Sunday for show jumping have sold out. In response they have opened a section of the south stand bleacher seating, and if you are planning on going I suggest snapping yours up quickly. Keep checking EN for updates about all things four star, it’s going to be a busy week!

Badminton organizers are gearing up for a big year. Between last year’s bitter disappointment over the event’s cancellation, leftover equestrian excitement from the Olympics, a star-studded field of entries that includes superstar Michael Jung (not to mention William Fox-Pitt riding for a shot at the Rolex Grand Slam of Eventing), and a brand new water complex called Mirage Pond, organizers are expecting a record crowd at this year’s event. [Gazette Series]

Horse&Country TV will be expanding its coverage of Badminton. The network is producing preview episodes as well as event coverage this year. In addition to this, cameras are also following rider Francis Whittington during her preparation and run at Badminton n a special documentary called Badminton: A Rider’s View. We will keep EN readers updated on whether any of this programming will be available online. [British Eventing]

Robert Dover will be the next chef d’equipe/technical advisor for the U.S. Dressage Team. While he still has to sign an official contract with the USEF, the organization has announced his appointment in an official press release. [USEF]

Attention Area II: there are still spots open at the 2013 Adult Eventing Camp, which is scheduled to take place May 22-26 at Loch Moy Farm in Adamstown, MD. The camp includes stabling, lodging, meals, lectures, two lessons a day, and entry in the 5/26 starter horse trial at Loch Moy with coaching. [Area II Eventing Camp]

Listen to the Eventing Radio Show: This week’s episode features an update from England from Jess Montgomery, an interview with Rolex first-timer Emily Renfroe and her coach Kyle Carter, and John Nunn’s tips on how to navigate the Rolex Vendor Village and have a successful sales weekend. [Eventing Radio Show]

Rest in peace Alberto Valdés Ramos. The 93-year-old Mexican showjumper was the last living member of the “dream team” that won the gold at the 1948 London Olympics.  His teammates claimed individual gold and silver in an unforgettable day for Mexican sports. In 2011, Ramos was honored by the Mexican Olympic Medalists Association and the Mexican Olympic Committee as one of the best riders in the history of equestrian sport in the country. [Horsetalk]

The results of the horse meat scandal are in. 4.66% of all tested meat labeled as beef in the European Union contained traces of horse DNA. The European Commission said that there were no safety issues and risk of contamination with phenylbutazone was very low, but there will be tougher penalties for fraudulent labeling in the future. [Horsetalk]

Own a top horse, get cool team gear