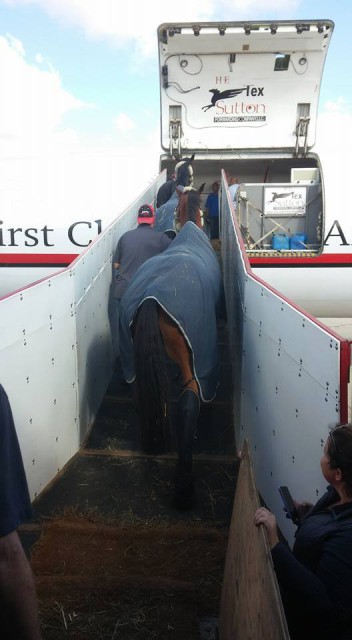 The final flight of the season took place yesterday, as Fernhill Fugitive and Mr. Candyman made their way swiftly back to Pennsylvania for the winter. Usually I feel a bit let down after the season is over. No more entry status lists to check, no more scores to compile. This year is a major exception though, as I am getting married this coming Saturday! So please bear with me if your Wednesday news and notes are a bit subpar today. Concentration is tough at this point!

Let’s all send healing thoughts to Stephen Bradley. Stephen was in third place in the Preliminary division at Virginia when his mount Lunetta took a tumble during cross country. Stephen broke his collarbone, and while he won’t need surgery, he will be spending some time out of the saddle. [Stephen Bradley Eventing]

Holly Jacks is fundraising for her Olympic goal. Holly and her horse More Inspiration stepped up to the plate this year, completing their first CCI3* and their first overseas CIC3* at Aachen. Now they’ve set their eye on the Olympics and are running a fundraiser dinner on November 21, at Woodbine. If you can’t make that, don’t worry. There’s also an online silent auction that you can bid on. [Holly Jacks Fundraising Flyer]

A woman jockey has won the Melbourne Cup for the first time. Michelle Payne made history by winning the Melbourne Cup on Prince of Penzance in Australia yesterday, and is giving all the credit to her brother, Stevie Payne. Stevie is a strapper (groom to us Americans) for a racing stable and happens to have Down Syndrome. He also has a reputation of being one of the best strappers in the business. Oh yes, Prince of Penzance was a 100-1 shot. [A Woman And Her Brother]

Nine reasons to both miss and not miss the eventing season. Our compatriots over at Horse & Hound have compiled a list of reasons to be both sad and happy about the conclusion of the 2015 season. While a couple of these are decidedly British (after all, we have Ocala and California), most of these ring a bell. [The Eventing Season is Over]

They’re finally at Adelaide! Alice and Fernhill Present have finally, finally made it out of quarantine and down the road to Adelaide. Of course, by down the road, I mean at least a 14 hour drive, where Hilly will need to remain separated from the other horses at all time in order to not need to go through another quarantine period on his way back to England. [We’re Free at Last!]

Take a peek into a dressage pro’s tack room. Lauren Sprieser opens up to the Chronicle about her tack of choice. As a dressage rider, her box of bits is a bit smaller than an eventer’s but Lauren gives interesting insight into why she uses what she uses. Most of her choices are classic and proven by time. [What’s In Your Tack Trunk?]

SmartPak Product of the Day: With my horse out with an injury for a while, I don’t get to do much but graze and hand walk him. Normally a pretty well behaved horse, he tends to get silly when not being ridden, and after six weeks off, he’s been telling me he is ready to go to work again. Unfortunately, it’s not his choice, which makes a chain and a nice padded leather lead a great idea. [SmartPak]

Check out Holly’s go at Plantation Field, where she finished a fantastic fourth place in a phenomenal field. She added only 0.8 time penalties to her dressage score.