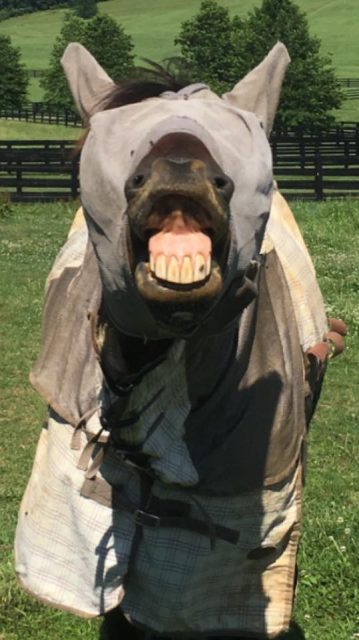 Cambalda can display his opinion on fly gear all he wants, but the bugs have been unreal this summer. I’m going through fly spray so quickly that everyone wrinkles their nose when my horse comes near, as he smells like some kind of chemical spill. I’ve pulled about fifty ticks out of his mane and tail and I have bug bites in places that seem unlikely to have even been accessible to bugs. On the other hand, it’s not that hot yet…but then, I don’t live in the southwest.

William Fox-Pitt apparently fits on a polo pony. WFP squeezed his frame onto some brave polo pony and took a swing at playing the sport of polo. To everyone’s surprise, his brother played polo but William never took it up…until now. Next week he will be participating in a charity polo match. [It’s A Lot Harder Than It Looks]

Donner is a unique and individual soul – but Kendyl Tracy just gets him. Whether it is grazing him in his non-turnout or catering to his allergies, Kendyl has accommodated Donner’s whims all over the world. From England to Rio to France to England, Kendyl has traveled all over keeping an eye on this off-track thoroughbred. [Donner’s Secret Weapon]

Did you know that the trophy awarded for Lady Rider of the Year is named for Bea di Grazia’s mother? Essie Perkins never won Lady Rider of the Year but was part of the first eventing families. The trophy bearing her name has been given a remarkable ten times to Karen O’Connor and the longest streak is owned by Sally Cousins. [Trophy Tales]

SmartPak Product of the Day: I really hate the heat. A lot. I also cannot ride without gloves. The Roeckl Chester Gloves, with their mesh back, are an absolute god-send. The air circulating over my hands helps keep me much cooler than I would be if I were wearing normal gloves. [Smart Pak]