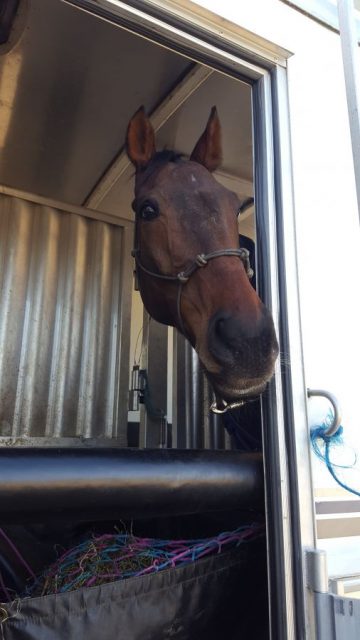 The squid is super pleased with himself after a stellar XC schooling. Photo by Maggie Deatrick

T-minus two days until I am on a flight (again) to Atlanta (again), about to drive to Aiken (again). But this time it will be for an event! I haven’t flown out to an event since my college days, so I am feeling very hunter-princess indeed as I fly in just to take the reins and glamorously jet out again after the show. I won’t feel so glamorous trudging through the airport parking lot at 1 am Monday morning, looking for my car, but such is the price we pay as amateurs. I can live with a little bit of sleep deprivation.

The one and only Joseph Murphy will be offering a clinic in Ocala in early February. Despite being a cross-country savant himself, Joseph decided it never hurts to learn from the best and spent some time picking up some tips from Michael Jung and Christopher Burton recently. Sign up now for his clinic to gain not only some Irish expertise but maybe a little bit of Jung’s advice, secondhand, as well. [Joseph Murphy Ocala Clinic]

Don’t expect to see Zara Tindall at Kentucky this spring. Zara and her husband Mike Tindall have announced they are pregnant again, due this year. Zara nd Mike have a 3 year old already, and this child would be 19th in line to the throne, after the child that the Duke and Duchess of Cambridge are expecting. [Zara Tindall Expecting]

Like many Americans unable to head south, the Brits are focusing on the basics of fitness over the winter. Nicola Wilson reveals some of her favorite winter tips, like spending time hacking and trotting before thinking about spring gallops, and feeding on the ground to stretch the top line. [9 Winter Training Tips]

Boyd Martin got to live every 90s girl’s dream of joining up. Working with Monty Roberts at the Adequan West Coast Dressage Festival Masterclass, Boyd joined up with one of Monty’s homebreds. Afterwards, he did an eventing demonstration with some of Erin Kellerhouse’s young event horses, using humor to provide entertainment to the crowd. [Boyd Martin Joins Monty Roberts for Masterclass]

Prepare for the 2018 competition season by attending the 16th Annual Weekend Equestrian Program to be held January 27-28 at Chase Collegiate School in Waterbury, CT.  Over 50 presentations will be made on a range of topics including, but not limited to, colic, wounds, vital signs, dehydration, Lyme disease, USEF drug testing, and improving your test scores.  Specifically for eventers, talks will be offered on the new 2018 USEF dressage tests, conditioning for the lower levels, the warm-up at a competition, and how to improve the stadium phase.  For more information, including information on schedules and registration, go to [Dressage4Kids].

SmartPak Product of the Day: With as cold as it has been, insulated bucket covers might help ease the pain a little. These guys from SmartPak are even on sale, so buy them now so the next cold spell your horses all have less-frozen water! [SmartPak]