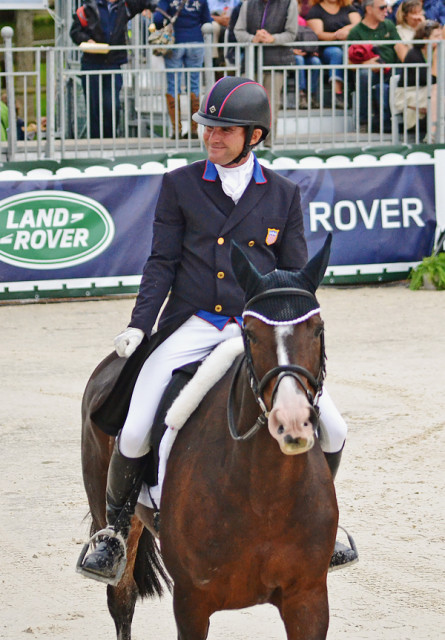 By now you’re probably well aware of the logistical nightmares at #WoodstockWEG, not just at Haras du Pin for eventing, but at all the venues for the Games. Here’s a play-by-play if you missed it earlier. In summary, we’re practically parking in Spain, there are no shuttle buses, no sidewalks, and it’s a miracle no one’s been hit by a car.

And those are just a handful of the problems with simply trying to get into the venue — much less actually attempting to watch the competition without being swallowed alive by the mud pit. We can’t even speak of the horrors we’ve seen with the bathrooms; we try to keep it PG here, ya’ll.

Indeed, it’s survival of the fittest at Haras du Pin, not just for the journalists, but for the riders, grooms and owners as well. But instead of focusing on the negative, I’m going to end the day with a little story of how Team USA pulled together to avert a last-minute crisis.

Our riders usually wears snazzy American flag ear bonnets for dressage at international competitions, but when officials informed Joanie Morris at the last minute that the horses weren’t allowed to wear them, she turned to Katie Walker, brain child behind the Best. Event. Ever. at Plantation Field Horse Trials and member of both the Shamwari 4 and Trading Aces syndicates.

“Joanie texted me two hours before I left to see if I could find six matching bonnets. They had to be navy or black — no fringe,” Katie said. “Of course, I freaked out because I hadn’t even started packing yet.” She called two tack stores with no luck, and then turned to John Nunn, mastermind behind EN’s super popular sponsor Tack of the Day.

“Voila! Hero of the day. He had four bonnets,” Katie said. “I got them from him literally as I was leaving for the airport and delivered them to the team. And here they are cleaning up. Secret weapon!”

It’s a little behind-the-scenes example of how we’re all making it work here in Normandy, where I have truly learned to appreciate an event that is well orchestrated. Thank you to all the organizers who work tirelessly to run events that truly cater to the needs of competitors and spectators — and journalists! — alike. You earn your weight in gold.

[Team USA in Strong Position After Day 1 at WEG]

[William Fox-Pitt: ‘It’s Not Going to be a Dressage Competition‘]