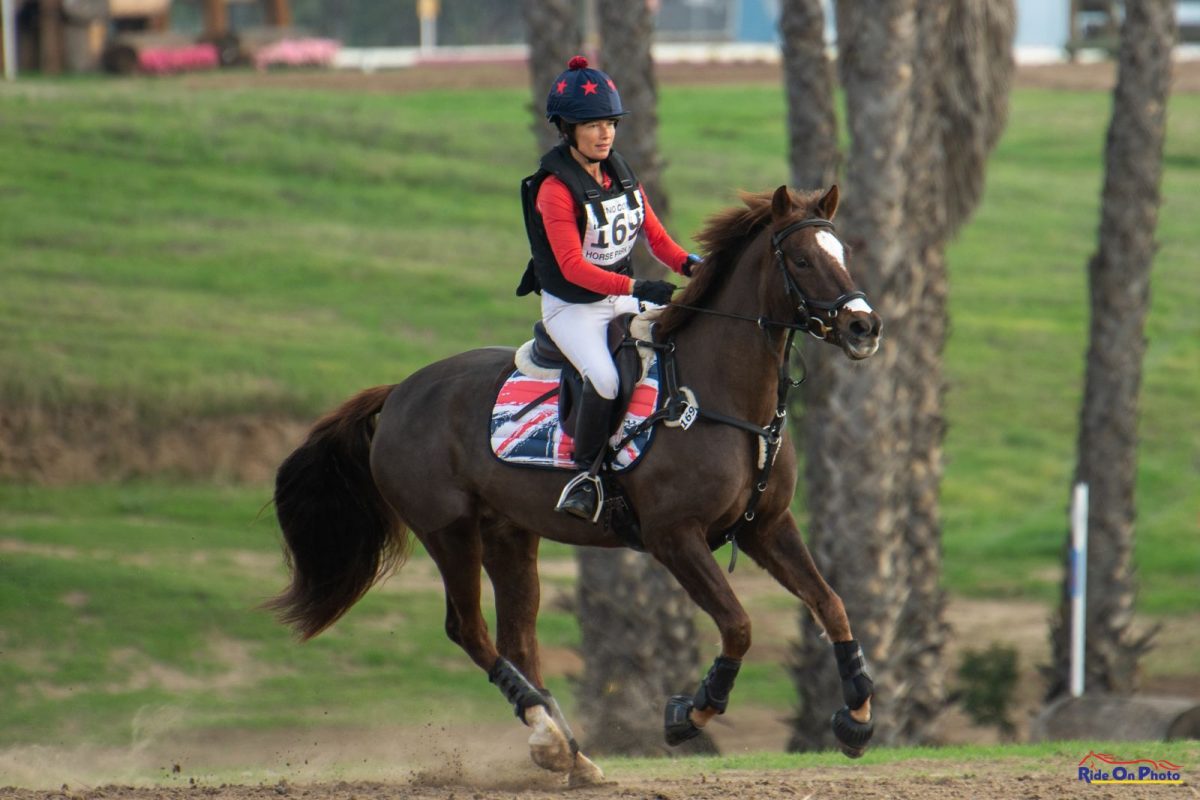 Alice Chan and Quintessa. Photo by Ride On Photo.

For riders of a certain vintage, the name “Ram Tap” evokes the wild wooly 70s of West Coast eventing. Amateur Alice Chan isn’t one of them. She wasn’t competing in that era, hence has given little thought to the Fresno County Horse Park’s rechristening to Ram Tap, its name on launch in 1957.

Alice did give a lot of thought to the venue’s cross-country course, especially the addition (or re-introduction) of the big hill near the announcer’s tower, aka “Punchestown.”

“I’m going to have go out there and really ride!” Alice observed while listening to the Beginner Novice Three Day play-by-play before heading out herself on Quintessa last fall. “Normally you’re going to win on dressage, but here cross-country did what it was supposed to do. It was exciting and fun!” The pair moved up six places after cross-country and finished as reserve champs.

Excitement and fun are exactly what organizer Terry Hilst has been going for since she took over the Central California venue late in 2020. Ram Tap has always been valued for its riverbed footing that enables the show to go on in almost any amount of rain. Terry wants it to be known for more than that. She wants everyone to experience the thrill of advancing toward their equestrian goals on a safe stage and to encourage the fun and joie de vivre for which eventing is famous. 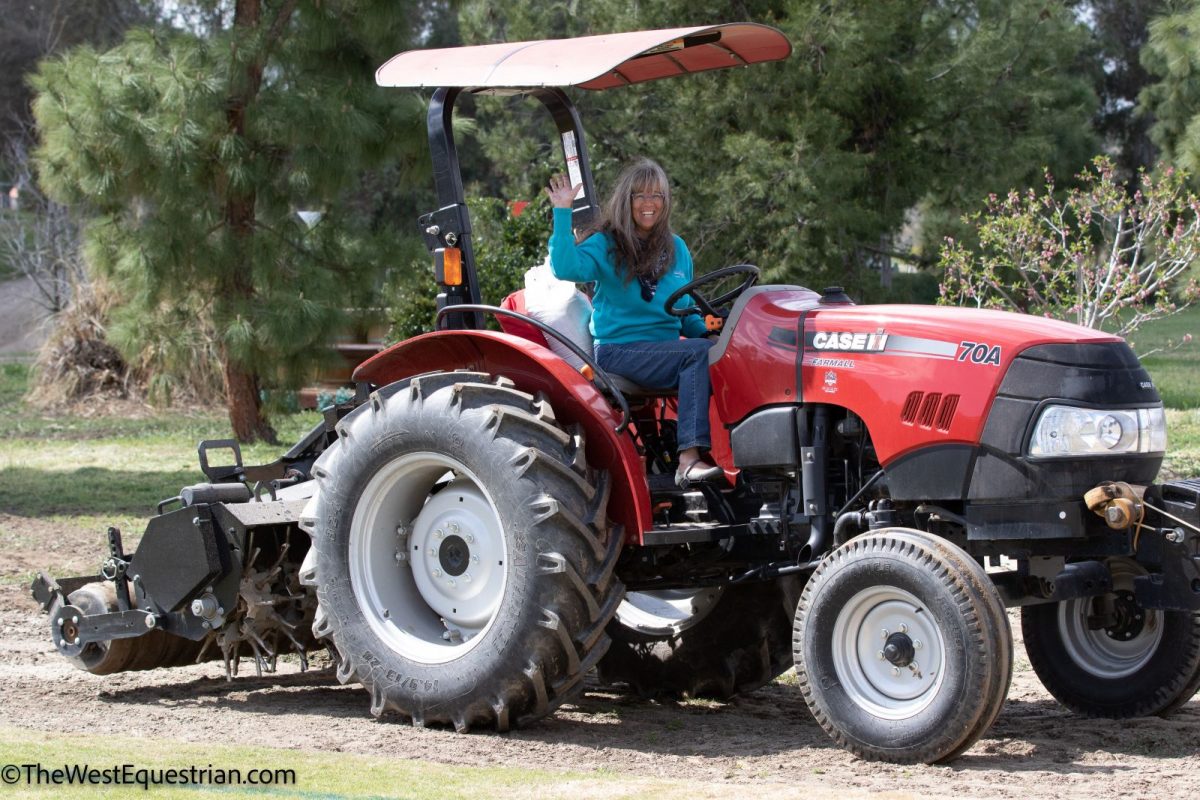 Ram Tap Is Back

Terry sought permission to revive the Ram Tap name to honor that era’s spirit and those who developed it. “I want to go back to the roots of eventing: to put back some of the camaraderie and celebration that we used to have.”

In stepping in when it seemed the venue might be lost – again — she followed the lead of John Marshall, an amateur eventer and fan. He’d stepped in to save and rejuvenate the equestrian property in 2012, much to the relief of riders throughout the region. He made many improvements, including the Pavillion gathering area, and staged Horse Trials and competitions in other disciplines. “John built such a beautiful place,” Terry comments.

John is lauded for continuing a proud tradition begun by original owners Pat and Marian Humphries. The Ram Tap name comes from the first three letters of Marian and Pat’s names, spelled backwards, and the Humphries name is synonymous with supporting high quality West Coast sport. Their former stable boy, longtime friend, employee and competitor Bill Burton picked up the torch when the Humphries retired.

Bill is renowned for carrying on the Humphries’ dedication to horse sport. So much so that Terry was worried about the course changes builder and designer Bert Wood and Jay Hambly proposed and implemented last fall. 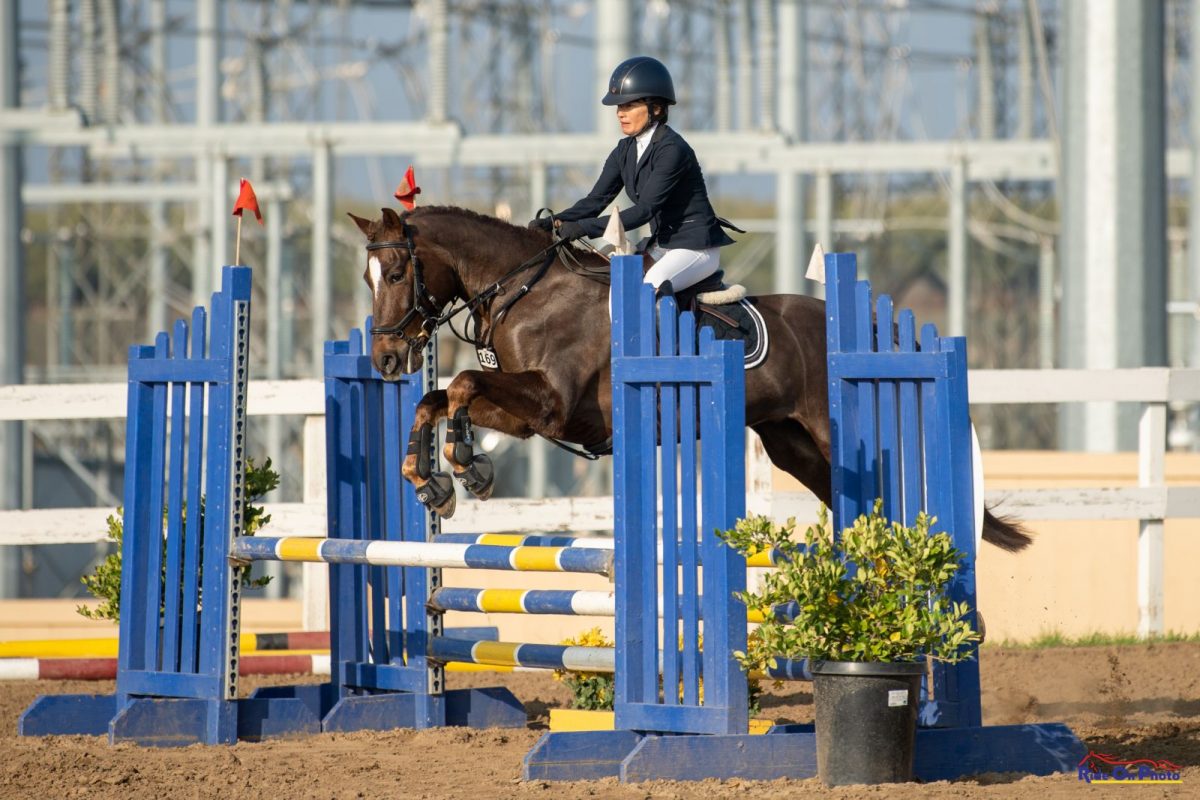 Alice Chan and Quintessa. Photo by Ride On Photo.

“Bert and Jay did an amazing job with course changes between our October and November events last year,” Terry explains. “They revised everything from Training to Intro because we all need a little change up now and then.” By removing jump arenas and containers from spots they’d long occupied, the dynamic duo had a clean slate to work with.

As Alice Chan notes, the changes were well received by competitors. Yet when Bill Burton came to visit, Terry wondered: “Oh, my god, am I destroying history?,” she shares. “Bill walked up and said, ‘I’m so glad you did that: that all that stuff is gone!’”

Of the return of the aforementioned Punchestown hill, Terry recalls one rider raising her hand in the air and shouting after cresting the ridge, galloping down it “Man From Snowy River style.” Within the range of what’s safe, that was exactly the kind of fun Terry wants to see more of: on course, during exhibitor dinners, hanging out in the barns with friends, etc. 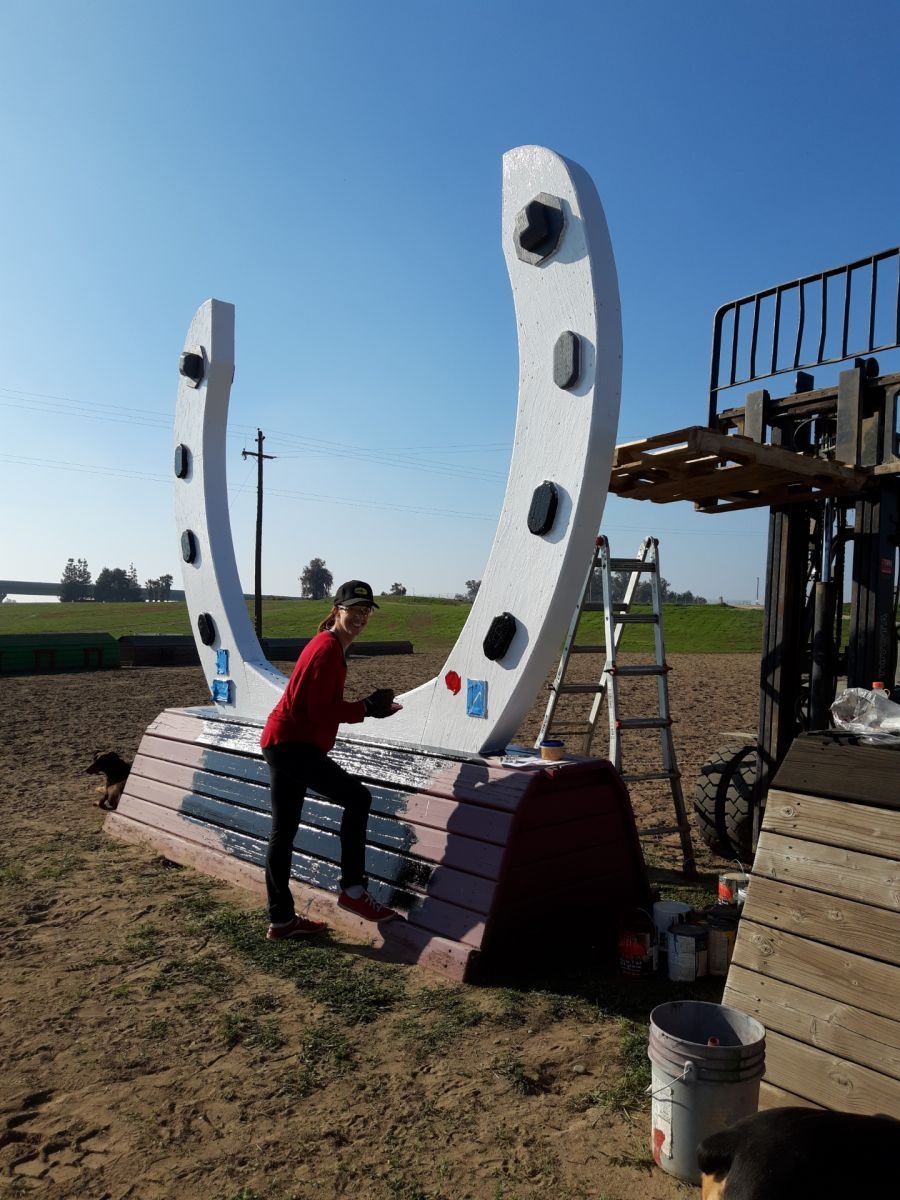 She had plenty of experience for the position. A long-time eventer, Terry had organized events at the Camelot Horse Park in Northern California’s Butte Valley until they ceased in 2019. In the interim she indulged her passion for designing cross-country courses and for dirt: the kind that’s ideal for horses to gallop over on cross-country.

She’s now licensed to design courses up to Training level and she’s an expert on dirt at every level.

“My passion is providing good footing,” she explains. So much so that she purchased her own tractor and the “aggravator” attachment that she describes as “causing a minor earthquake” six inches below the surface. The effect is to quickly create safe, cushioned footing. Under the tutelage of longtime West Coast course builder and footing expert Bert Wood, Terry’s been in the driver’s seat aggravating the tracks at Galway Downs and Woodside Horse Park for the past few years, along with prepping the tracks at Ram Tap.

In fact, she was doing exactly that in preparation for the Galway Downs International in late 2020 when she got the news about John Marshall ending his run at Fresno. “Bert (Wood) got the call from John, and Bert turned to me and said, ‘Terry, you should buy it!'”

Since doing as Bert advised, Terry has been grateful for a tremendous amount of help from day-one. John Marshall signed on to help organize shows and continues to support the Ram Tap efforts in various ways, along with maintaining an on-site tack store.

New divisions are part of Ram Tap’s present-day appeal. Terry staged Modified divisions at three Horse Trials last year. By popular demand, they’ll be back this year, as will the full format Three Days in November. New in 2022 is the Grasshopper division with fence heights maxing out at 18”. “The idea is to give people a level where they can come and get introduced to the sport,” Terry explains. “This is the division where we are not going to scare you!” 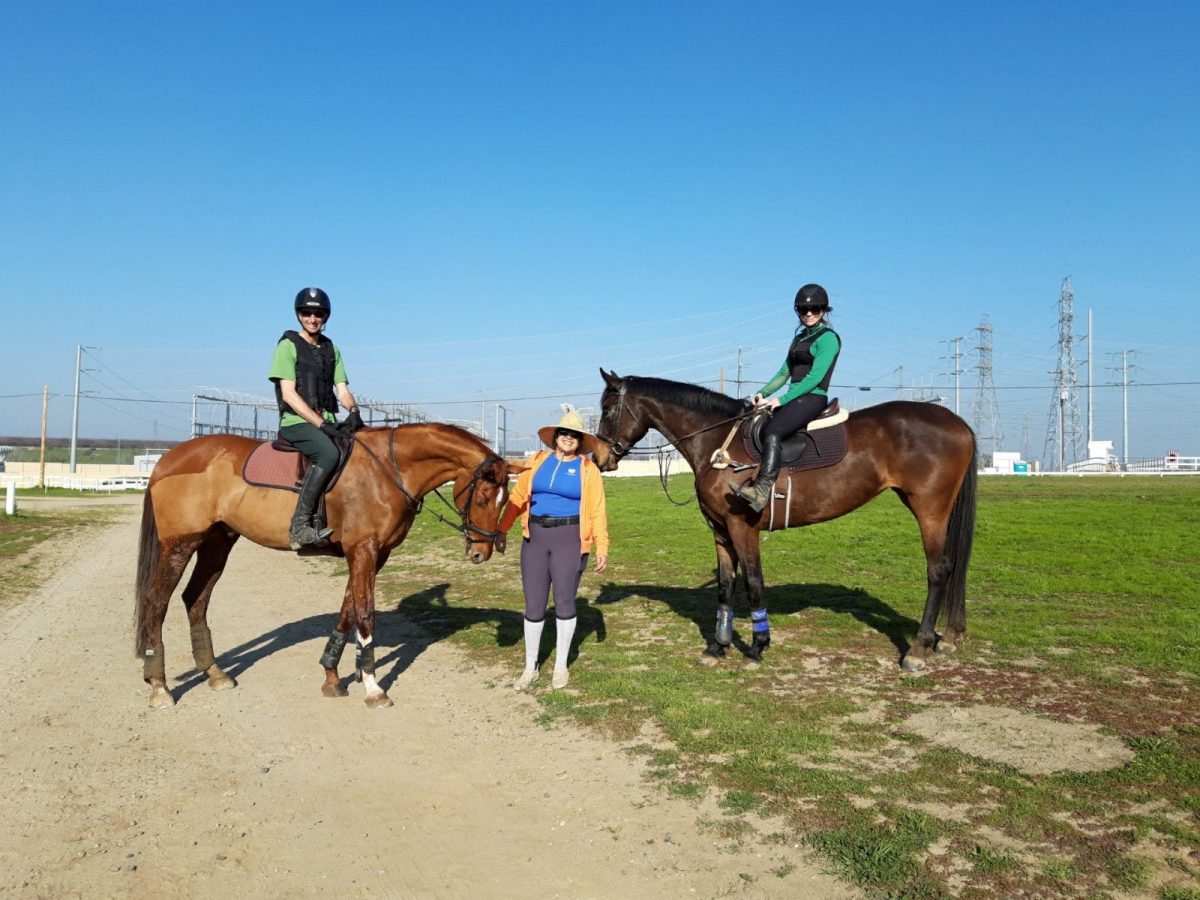 Tommy Greengard was the big winner of January’s Combined Test’s Open Intermediate, Preliminary and Intro Senior divisions. The young professional and Chocolate Horse Farm rider has been competing at Ram Tap since he was 10, rain or shine. “It’s been amazing to see all the changes to the place,” he observes. “It’s one of those facilities you can count on regardless of what you have weather wise, the footing is always amazing. Since Terry has taken over, we love how she is so invested in all the riders having a good time.”

Ram Tap’s riding challenges are real, he corroborates. “You can expect all the serious elements: the water complexes, sunken road, everything you would want on a course. And it’s a place where you can bring a big group of people and everyone can have fun at all the levels.”

February 18-20 is the first of five recognized Horse Trials at the Ram Tap Horse Park this year. In late March, it’s a clinic with Jock Paget, a popular annual tradition at the venue. Schooling HTs, clinics and United States Pony Club certifications fill in an exciting calendar. Whatever the level and whatever the event, it’s sure to be exciting and fun with Terry Hilst at the helm.

To learn more about Ram Tap and view the calendar of events, click here.