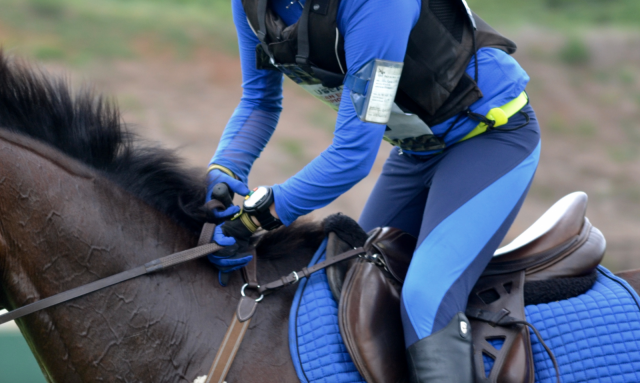 “I believe that riders should be required to wear medical armbands in ALL phases of showing, and this goes for dressage riders, hunters and jumpers. Maybe more importantly, that we should be wearing these armbands OUTSIDE of the show ring.” Photo by Leslie Wylie.

I was involved in one of the scariest moments of my life on Friday afternoon.

Having just walked my cross country course in preparation for Saturday, I was hustling up the hill to the trailer area at the Kentucky Horse Park.

With the immense growth of the infrastructure of this park, those of us who haul in daily for the shows are relegated a good mile or two from the stadium and dressage rings, and our hacks back to the trailers can be long, can be relaxing, or can be dangerous.

And as I hurried up the hill, I looked over to see a horse and rider heading back to the trailers themselves. In jump tack and with a smile, I assumed they were heading home from a good stadium round and gave a head nod, recognizing the rider but not knowing her well enough to actually speak.

And then I heard the deep exhale of a horse that was either spooking, or running, or bucking. And I turned and just froze.

I watched the rider sit the horse for a solid four or five bucks even though her reins were on the buckle and she was holding a drink in one hand. And then she was unseated, falling, and finally — the worst part — being dragged.

And I stood there with this horrible realization that there was nothing I could do. Nothing I could make better. I was too far away. Too helpless.

And so I simply watched as she finally came off and the horse went running up the hill.

I screamed over the fenceline to her to see if she was OK, but she did not respond.

I looked over the fence line to see if she was moving, but she was not.

So I threw my body into motion and jumped the two fence lines separating me from her and ran to her side. And what I saw made my stomach churn. She had landed face down in the gravelly sod, and was not moving. I yelled her name and she did not respond. But my CPR and emergency training from the dude ranch kicked in, and I began to triage.

I checked her breathing and saw that she was, and knew that meant to leave her where she was lying. I did not want to risk placing her neck or spine in any malposition and risk paralyzing her. Her pulse was strong and I didn’t see any gaping wounds that would need pressure applied to, but still didn’t move her arms or legs to investigate further. But she still wasn’t responding or conscious, and I knew I needed help. I screamed at golf carts passing by to no avail, as they either (hopefully) didn’t hear me or didn’t care.

So I pulled out my phone and dialed every number of every rider I knew that was at the stadium arena — only 500 meters away, but oh so far. I finally reached one of my best friends Courtney Calnan, and she picked up on the first ring. And it was the best person to reach. I simply said “I need the ambulance and medics on the horse path across from the Walnut Ring NOW” and she just hung up.

She didn’t ask questions. She didn’t try to get gossip. She just hit End on the call and went into motion.

I knew that Courtney would not only know how to get medical assistance, but that she also personally knew every show official, judge, and member of the board. I could focus on the woman lying next to me while I trusted my friend to do the rest.

What felt like an hour, but was actually only a few minutes passed by before the EMTs arrived. And as they hurried to her side, they asked me her name — which I fortunately knew. And then they asked me her age, which I had no clue.

I stepped away, trying to continue to hold it together, and looked to my left to see Courtney running up the hill towards me. She grabbed me in a hug, and with that exchange, she took over and I took off to find the rider’s loose horse.

I called another dear friend Holly and quickly told her what happened and asked that she begin the hunt for the horse from the opposite direction, and she, like Courtney, just hung up and began searching.

The horse was caught, and quickly brought back to the trailer where a team of amazing women and men untacked him and got him settled. And as he was walked towards his rig, I noticed one man standing there looking confused.

It was the rider’s husband, awaiting his wife from her hack from the ring. I calmly walked up to him and told him that his wife had fallen, and that the EMT’s would need information from him. Without a word, he jumped into his car and hurried down the hill to his wife.

And then I sat at my own trailer and just dissolved. All of the adrenaline seeped out of me in tears and I just wept.

Courtney texted me updates throughout the next hour, letting me know that the rider was finally talking, or being placed on the backboard to go into the ambulance. And I watched the police escort the rider out as I made my own hack down the horse path on my way to stadium, just trying to focus and hold it together.

I learned a lot from this situation; a situation I will never forget. I am far from a safety obsessed rider — but Friday changed me.

First and foremost, I believe that riders should be required to wear medical armbands in ALL phases of showing, and this goes for dressage riders, hunters and jumpers. Maybe more importantly, that we should be wearing these armbands OUTSIDE of the show ring.

I used to believe that these bands were useless, as I was in the arena and had already written this information down on my entry. But I realized on Friday that after her horse left, no one knew what number this rider was. Her information would not have been found had she not been surrounded by people who knew her by name.

These barcoded or scanner arm bands are smaller, and therefore popular in our discipline, and that is fine. But either on the opposing side of that plate or in an additional band, your name, DOB, and ICE number should be easily accessible, as none of the first responders who able to scan this code at this specific event to access any of this information.

I also realized just how scary this situation would have been had this not been my home turf, and had I not been literally surrounded by my contact list. Had I not known that Courtney was on the grounds and near the ambulance, who would I have called?

I thought about calling 911, and was told by numerous people that that was actually the worst thing I could do. The Horse Park, like many other large breeding farms in our area, are a literal nightmare for these first responders. Addresses to individual barns or arenas are not accessible, and the ambulance driver then ends up driving in circles as crucial minutes tick by.

The show officials can call 911 and then send an escort to the main entrance to give the ambulance a lead, but not me.

And I didn’t have the contact info of any show official in my contact list. In retrospect, could I have logged onto USEventing and found this information? Yes. But in the heat of the moment, that was the last thing I thought of.

My boyfriend made a good point that (if possible) it might be prudent for these large horse parks and show grounds to create their own security number, or emergency number, and then advertise/promote the crap out of it. Have it hanging in every barn and every phone pole. Make it 311, or 411, and have it immediately call either the security office, or the show office. Have it easy to remember, easy to access, and readily available in situations like this. We have medics on the grounds for these shows for a reason, but we need to be able to access them swiftly and easily.

And finally, find the safest route with your horse. I realized while watching this happen that we were so lucky. That she was so lucky. She had taken the horse path when so many others take the shorter route on the actual paved road. She had landed on grass, albeit hard grass, instead of cement. And that simple decision may have saved her life.

But this accident didn’t involve a high pace or a large fence, just a simple spook with a rider who wasn’t ready for it. And that can happen to any of us.

I learned that night that this rider will be OK. She was concussed, and obviously banged up and bruised, but she was talking and she was with her family and friends. And I read that message and just closed my eyes and thanked whatever guardian angel was watching over her that day.

But we can all learn from this.

We should all take a first aid/CPR/triage class, and be prepared.

We should all ride with proper identification on us, whether it is at a show or at home.

We should all know how to access medical assistance at these shows, whether it is through a show official or a friend.

We should all ride with proper safety gear-helmets, footwear, etc, on EVERY RIDE.

And we should all hug our ponies and our loved ones tonight, because anything can happen in the blink of an eye.

That is what I learned this weekend. I hope you learned something too.

Carleigh Fedorka holds a Ph.D. in Veterinary Science from the University of Kentucky’s Gluck Equine Research Center. A Pennsylvania native, she moved to Kentucky after graduating from St. Lawrence University and has worked closely in all aspects of the thoroughbred industry. She spends her free time eventing as well as training, selling and rehoming OTTBs. Read more about her horse life at her blog, A Yankee in Paris.