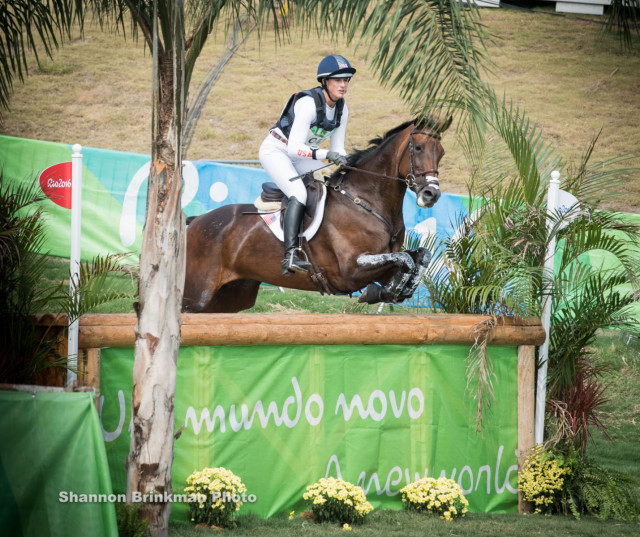 Another cross country day at a major championships, another let down for Team USA. After failing to complete a team at the 2014 World Equestrians in Normandy, many hoped the U.S. was back on track and ready to reclaim a place on the world stage — or at least put in a respectable performance at the 2016 Olympic Games in Rio de Janeiro.

But after the toughest cross country day in the short-format era — with just 40 percent of the field jumping clear — two of the four U.S. team riders did not finish the course, leaving us without a team completion. Of the 13 teams competing in eventing at these Olympics, 11 of the teams completed cross county with a team intact. Russia’s team was already out, as they only had three riders and one withdrew before cross country. The U.S. is the only country that did not complete a team today.

The day started out very promising, with Boyd Martin riding “like a demon,” as Phillip Dutton put it, to bring home the cracking trailblazing round the team needed with Blackfoot Mystery. A clear round with 3.2 time penalties ultimately boosted Boyd and “Red” up to sixth place in the individual standings at the end of the day.

Clark Montgomery and Loughan Glen set out next, but things went all wrong from the very beginning when the horse did not seem keen at all to turn at the first water complex and picked up 20 jumping penalties. They continued on but picked up a runout at 14A and another runout at 17B. That was three refusals and elimination, though the 20 penalties from the first water were later removed, changing Clark’s score to an R for retirement.

Then it was up to Lauren Kieffer and Veronica to deliver a clear round for the team to keep our medal hopes alive. By that point in the day, numerous top teams, like the Germans, Irish and Great Britain, had all run into trouble on course, opening the door for the U.S. to step through. Even a clear round with a hefty number of time penalties would have boosted the U.S. well up the team standings by that point.

Lauren and Veronica were having a foot perfect round until the very tricky set of fences at Malmesbury Cottage. The direct route required horses and riders to jump the front corner of a wide table at fence 23, then go on a bending line in four or five strides to jump an angled narrow gate at fence 24. The long route had riders jump the table straight on, then circle around to the gate.

While some horses and riders did successfully take the tricky direct route, many also took the long route. After Clark’s retirement and with the team needing a clear round to keep the team in the competition, it seemed like Lauren would likely take the long route with Veronica to play it safe.

But she didn’t. After jumping the corner at fence 23, she went direct for 24. Veronica caught her right front foot on the gate when they didn’t quite get the right approach, and they fell hard on the landing side. Thankfully, both of them are OK, though Lauren is having her thumb examined as a precaution; it was bandaged after cross country.

Phillip Dutton and Mighty Nice then completed the course with a clear round, coming home with 3.2 time penalties — and pulling off the save of the day at the corner combination at fence 6 — to move up to fifth place on 46.8.

Let’s break down what went wrong. First off with Clark, he said a previous training issue with Loughan Glen reared its ugly head today: “He’s definitely not feeling himself. It was an adjustability issue. He’s very difficult to make come back and then to turn to the right especially. It’s something I know that needs to get fixed. We were unable to fix it before we got here. I thought everything really was OK, and apparently it wasn’t.”

Looking to Lauren, why did she go direct instead of playing it safe at the long route? “I think she was being really good, and it seemed stupid not to go the straight way. Then she just kind of hit that with her right front. For a second I thought she might save it, but down we went. My job was to get a clean round, first and foremost, and it’s pretty disappointing to let the team down.”

We spoke to U.S. team coach David O’Connor at the end of the day to get his assessment on what happened. First and foremost, Lauren was not told whether or not to go direct or take the long route at those fences. Instead, she was given the option to do what she felt was best given how Veronica was going up to that point.

“The instructions were if (Veronica) feels good and she’s going well and you get a good jump in the corner, then do the (direct) line. If that’s a mistake, then I’ll take it. I didn’t say, ‘No, you can’t do that.’ But I think you always respect that riders are here to compete. I will always respect the riders as long as I have the job for however long that is,” David said.

“It’s an instinct moment out there. We’ve all been there; we’ve all been in situations. I think she got caught inside the line, which she shouldn’t have done, but I’m not going to second guess her decision. The mare was foot perfect all the way around. Why wouldn’t you go down there if the horse was being that good? I’ll take the responsibility. If everyone feels like she should have taken a conservative route and I should have told her not to do it, I’ll take that.”

As for Loughan Glen, David commented: “The horse didn’t look like it was going to be in the game right from the beginning. … They had a great last 18 months leading up to here, and I’m sure there will be a lot of Monday morning quarterbacking for all of the different reasons, but the horse looks and feels physically fine. When he went in the competition ring, both in dressage and on cross country, he didn’t want to play.”

How is David feeling after such a disappointing day? “Devastated. You’re one fence away from medaling, basically. Phillip and Boyd I thought were great. Boyd really had to ride and used every skill he had to be able to get that done. Phillip chose a little bit of a different line into that corner, and I think the horse didn’t read it. It was a different line than we walked, but then I thought the horse jumped beautifully all the way around the rest of it,” he said.

“This ended up being an experience day. It was a tough day for the level, and experience showed where you’ve got Michael (Jung) and (Mark Todd) and all those other guys up at the top (of the leaderboard). There is nobody there that doesn’t have years of team experience, not just experience of individual competition, but years and years in team competition. I think that’s what today showed — that experience really does count.”

Thank you to David for speaking so candidly and openly to EN after a disappointing day for Team USA in Rio. You can click here to catch up on all of EN’s Olympic coverage. The first horse inspection is at 8 a.m. local time/7 a.m. EST. There is no live stream, but we’ll be tweeting live @eventingnation. The first round of show jumping starts at 10 a.m. local time/9 a.m. EST.