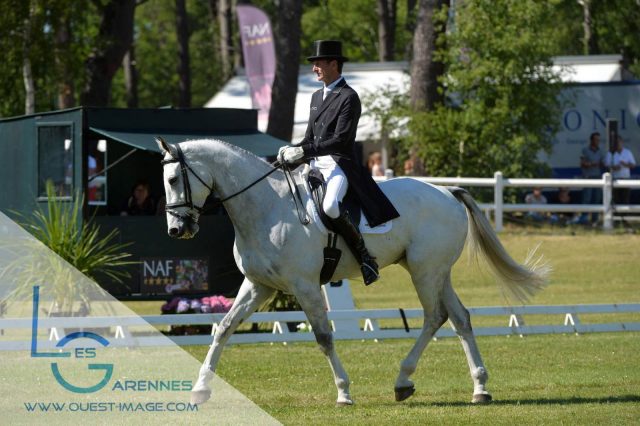 Mark Todd and Kiltubrid Rhapsody lead after the first day of dressage at Saumur. Photo by Les Garennes.

We don’t toss around the word insanity lightly at EN headquarters, but we can assure you things are straight up insane with so many exciting events running around the world this week. Luckily, you’ve come to the right place. Here’s your rapid-fire guide on what you need to know.

The U.S. has a team of three fabulous ladies competing at Houghton Hall in England for the second leg of the 2017 FEI Nations Cup.

Hannah and Harbour Pilot and Katherine and Longwood are re-routing from Badminton and competing at Houghton ahead of Luhmühlen CCI4*.

Caroline Martin is aiming for the Bramham CCI3* Under 25 as part of the 2017 Karen Stives Endowment Emerging Athletes Tour with both The Apprentice and Pebbly Maximus.

There is no live stream for Houghton Hall. Live scoring and ride times can be viewed on bdwp.co.uk.

While we don’t have any North American combinations competing at Saumur, there are a slew of pairs seeking their qualifying score for the 2017 FEI European Eventing Championships at Strzegom, including Michael Jung with Lennox 364, the horse he tapped long ago as his chosen ride for the Europeans.

Lennox 364, a 9-year-old Hanoverian (Sunlight xx X Heather’s Pride, by Heraldik xx), won his first start at three-star level least month at Marbach. Interestingly, fischerTakinou, who won the 2015 Europeans while his jockey battled a broken leg, also won the first three-star start of his career before going on to conquer Blair Castle. Is history poised to repeat itself?

You can watch Michael and Lennox’s dressage test live tomorrow thanks to the Saumur live stream on their homepage. Mark Todd and Kiltubrid Rhapsody, who impressed at Boekelo last fall but are seeking redemption following a mishap at the first Event Rider Masters leg at Chatsworth, lead after the first day on 39.1. Follow live scoring here.

Looking to the States, we have nine — yes, NINE — USEA recognized horse trials running this week. Of course we’ll have our eyes on Virginia Horse Trials, which play host to the USEA Intercollegiate Championships. Many students are ditching their books this week to proudly represent their universities, including Erin Jarbo, who is mounted on the only and only Sir Rockstar.

We’re excited to have Leslie Threlkeld as our boots on the ground at VHT, so be sure to check daily for her reports, photographs and social media roundups. You can follow live scoring here.

We also have our eyes on California as one of the West Coast’s premier spring events takes place at Woodside International Horse Trials just outside San Francisco. In addition to large Advanced and Intermediate divisions, Woodside is hosting the ever popular Preliminary Challenge.

Shelby Allen has us covered as your boots on the ground at Woodside, so be sure to check out her course preview for the Preliminary Challenge here, and keep coming back for more coverage throughout the weekend.

There’s also a big chunk of prize money up for grabs at the iconic Devon Horse Show in Pennsylvania, which is running a $50,000 Devon Arena Eventing class, presented by Mid-Atlantic Packaging, for the very first time on Sunday, May 28. We have the entry list and all the details posted here. USEF Network will live stream the class at 7 p.m. EST.