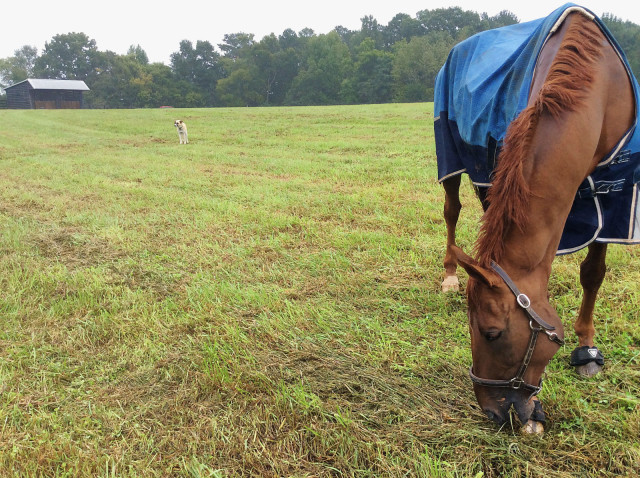 Manoir de Carneville on the first full day of his vacation at The Fork. Photo courtesy of Meg Kep.

Ballynoe Castle RM started his vacation on Monday, and fellow U.S. World Equestrian Games team horse Manoir de Carneville started his yesterday, as super groom Meg Kep drove him down to The Fork Farm and Stables in Norwood, N.C., where Sinead Halpin’s mom, Bernadette Cogdell, will be attending to his every need.

“We’ve been gradually getting him used to being on vacation,” Sinead said. “He’ll get his shoes pulled off and go out with two big Irish Draughts in a field for two or three months off.” It’s well-deserved downtime after tackling Pierre Michelet’s cross-country course, which “Tate” completed with one runout early on.

Sinead said she was pleased with the way he came through the grueling day. He trotted up well the next morning and pulled two rails in show jumping to complete the world championships. “He came through it better than he’s come through any four-star,” Sinead said. “I probably didn’t even need to ice him. He looked great the whole weekend.”

So what’s next for Tate? Sinead said she’ll be talking to the syndicate owners soon to hash out a game plan for the 2015 season. “He’ll be 15 next year, so it’s a matter of looking at the Olympics and working backwards from there. Do we go to Rolex and not put him on another plane, or do we want to go check out Badminton? I’m lucky to have a horse I know could handle that course.”

Tate is currently ranked 42nd in the world and has now completed five CCI4* events, most notably  finishing 2nd at the Land Rover Burghley Horse Trials in 2012. He also has two CIC3* wins on his record, finishing first at Plantation Field last year and The Fork this year.

Meg reports that Tate is settling in well today on his first full day of vacation. We’re excited to see what’s next for the French Princess as Sinead looks ahead to the 2015 season and ultimately the 2016 Olympics in Rio de Janeiro. Go Tate.