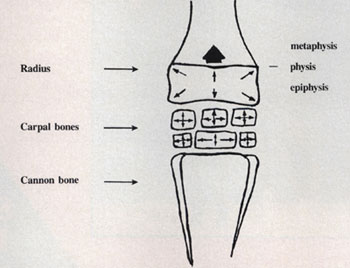 How many of us have ever been at a show or clinic and gasped or sighed as we see a rider struggle to get a young, seemingly terrified, physically immature horse around a jump course or through a difficult dressage test? I would venture to guess that at some point, some of us may even have been that rider, relentlessly pushing a young talented horse to realize its potential, not wanting to see that although talented, the animal just wasn’t ready. There seems to be this sort of unspoken, secret rush to get a great horse up the levels in eventing, but why? Are we doing what’s best for the horses?

The first time I saw Roy, he was fresh off the plane from Ireland. Almost black, rangy, and tall with an arrogant look about him. I tried to fly spray him, and he acted like I was coming at him with knives, then I scratched his forehead and led him out to his paddock; he tried to nip me on the arm the whole way there. Yep. Irish. I didn’t see him go under saddle until a few days later, but it was then that I understood why he was here. He was special, he was fancy, and he was brave — and he knew it.

Being nearly 17 hands as a 4 year old and as talented as he was might prove to be a bit of a temptation for some riders, as he could hop around a Prelim course looking bored at you, like you were making him spend his day doing cross rail gymnastics. Tempting yes, but his owner/rider Lucia Strini knew he was still growing. Between looking at his x-rays and his hind end being a good two inches above his withers, we all knew he wasn’t finished growing, and it wasn’t worth ruining his huge, yet fragile body just because he could probably be competitive at a CCI* in his 5-year-old year.

This made me glad to be a part of his life. A year later, he’s now probably pushing 17.1 hands and, thank goodness, his front end has caught up with his towering hind end. He no longer looks like an overgrown foal. He’s huge, and he’s beautiful, and he’s still fancy and talented and arrogant, and he knows it. The cool thing is he’s still going Training level, and he might just turn out to be Lucia’s first four-star horse because she’s giving him the chance to grow up physically and mentally and make each new experience a good one. 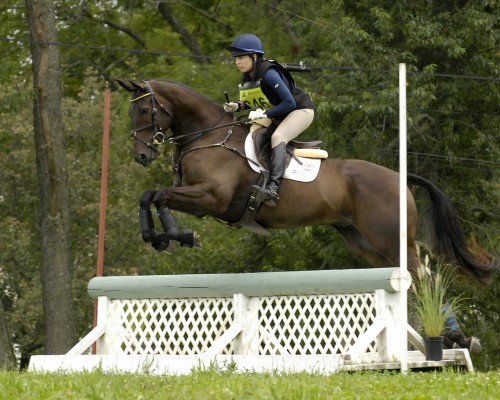 Roy competing this fall at MCTA and looking much more mature. Photo used with permission from GRC Photo.

When I think about Roy’s story and about all the things I see in our sport, I wished that his experience here would be the norm, rather than the exception to the rule. He won’t have navicular changes when he’s 9 or so much “jewelry” on his legs that you’d think he was put into race training as a 2 year old. He might not have gone to Fair Hill or Rolex yet either, but he’s more likely to be sound and competitive when he’s 15, and that’s what’s best for the horse. To be responsible riders and owners, we have to consider each horse as an individual. Sure, there are some horses that are physically and mentally mature and ready to go Intermediate at 6, but the majority are not.

After discussing this issue Dr. Keith Brady, a veterinarian at Old Dominion Equine in Keswick, Va., he outlined for me the things he takes into consideration when vetting a young horse and assessing physical maturity, therefore assessing suitability to be put into full training for competition. I also found an article written by Dr. Deb Bennett to be especially enlightening, which you can see here.

1. Radiographs: Race trainers often x-ray the distal radial radial physis (growth plate at bottom of radius) to see that it’s closed before breezing a 2- or 3-year-old for the first time. It’s of utmost importance that this growth plate is closed/fused before young horses are asked to gallop and jump. A simple x-ray is a wise choice for event riders/owners as well when starting the young horse. The “average” horse’s radial physis (growth plate) is closed early in their 3-year-old year, but this isn’t a license to put them into full time training.

Research shows that most of the growth plates above the distal radial physis remain unfused, especially the ones found in the horse’s spine. Since the spine coordinates all limbs — and is especially responsible for controlling the horses ability to gallop over undulating terrain —  it would seem wise to wait for a horse to be more physically mature before a full training schedule is initiated. In addition, their soft tissues, tendons and ligaments are still fragile and should be strengthened slowly, carefully and methodically as their workload is gradually increased.

2. Conformation: As any horse person knows, lots of horses look “adolescent” for a while, even into their 4- and 5-year-old year. The young horse may look long-legged or narrow in relation to their height, like an “overgrown” foal. They may be croup high and/or have a less prominent wither — all signs that they aren’t physically mature. When they look unbalanced, they will most likely feel unbalanced under saddle. Unfortunately, schooling/showing them relentlessly will not often help the horse become more balanced; sometimes, time to grow is the only effective training tool.

3. Size: The taller and larger young horses are, the more likely they are to injure themselves as youngsters. Although this may seem to be a gross generalization, it also rings true for big-boned and tall humans, as well as large breed dogs. Whether it is due to selective breeding for size in the equine and canine species or just because longer bones (such as cannons in the horse) are more fragile than their compact counterparts, it seems that nature is often unkind to those that grow quickly into large specimens. “Healthy, average males and females do not fully mature until they are 6, but tall, long-necked horses may take even longer than that,” Dr. Deb Bennett explains.

The responsibility of starting young horses at the correct time and not moving them up the levels too quickly ultimately lies with the riders and owners. Taking a long look at each animal and considering many factors, like those listed above, is critical for future success and soundness. It’s quite understandable to be excited about the exceptional young horse and want to realize the time and monetary investment you’ve made as a rider/owner, but a conservative start often brings the best returns over the years. There are reasons for the minimum age requirements in competitions, and making secretarial “mistakes” on entries and passports regarding age is just sickening.

Pushing young horses beyond their physical limits just because they can do it is a slippery slope. A cow can jump a four-foot fence from a stand still, so making your super talented 4 year old school Intermediate questions just because he can isn’t really accomplishing that much for him in the long run. Making him hurt or making him answer questions he’s not ready to answer for the sake of winning ribbons is NOT what eventing is about. Careful consideration of each young horse as an individual in your program is a major building block in the foundation of their training and your reputation as a horseman. The horse is, and should always be, the focus.