What would you do if your reins came unbuckled during a cross country round? That was the dilemma Mikki Kuchta found herself in while competing in the Advanced A division at The Fork with Rubens D'Ysieux. They are just fine after Mikki took a tumble in the second water complex, and she said their plans are still a go for Rolex. Kick on, Mikki! 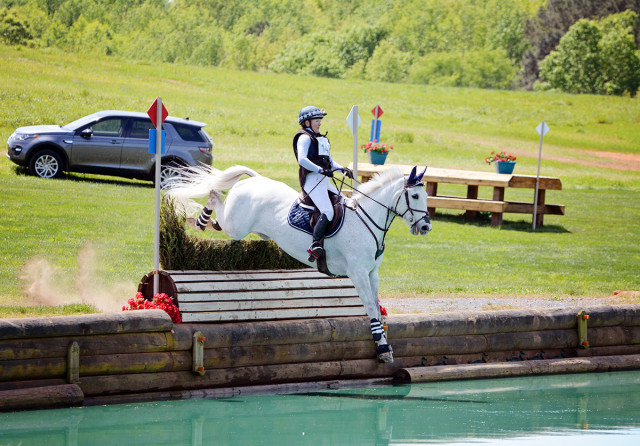 Mikki Kuchta and Rubens D'Ysieux at the first water complex at fence 9. If you look closely, you can see her reins had already come unbuckled by this point on course. Photo by Jenni Autry.

There is a story behind my fall in the Advanced Division A at the Fork. Rubens and I were having a super round with him handling the mound combination at fence 6 and the water complex at fence 9 beautifully. Then as I galloped away from the water complex, something was banging against my boot. I looked down and realized that my reins had become unbuckled. So now I have one rein in each hand, wondering how this is going to effect my ride.

As I’m pondering this, we jump the ditch and angled brush and gallop towards the next water. I knew I would need to slip my reins as that aqueduct tends to jump big and Rubens jumps big , particularly with his hind end. But if I were to slip my unbuckled reins the risk of losing one entirely seemed very likely, so I lengthened my reins and prepared to jump into the second water. Rubens jumped big, and on landing he pulled me right over his head. Reins not lengthened enough !#%&$

20/20 after thought … Jimmy Wofford asked me why I didn’t just re-buckle them while galloping … but Rubens was still pretty strong at this point, and I was unsure about looping the reins and trying to buckle them. Then someone asked why I didn’t just stop and buckle them? Now that is a good question … but it never crossed my mind.

Eventer problems … next time we will use electrical tape, knots, maybe some bailing twine, duct tape of course and zip ties just to be sure. Fortunately neither horse nor rider were hurt.