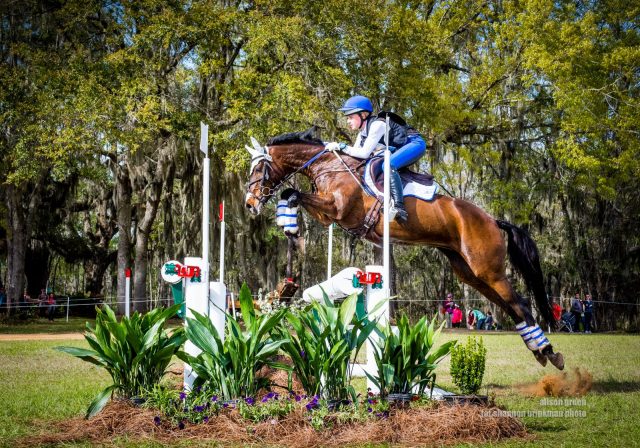 “When you stopped wishing things wouldn’t fall apart, you’d stop suffering when they did.” — John Green

I wish I had known how true this was 2.5 months ago, and I wanted to share that story with you.

On February 7th, I left my home for the east coast, with a spunky mare, a trailer full of clothes, and a heart full of dreams. I was going to attempt to qualify for the NAJYRC CCI1* this coming year, and I needed one more preliminary run plus a clear CCI1* run. I rode in the backseat of my friend’s Ram, quietly looking out the dark window at the life I was about to put on hold for the next 2.5 months.

I was afraid I would fail. I was terrified I would go on this trip, and at the very last moment have the mistake that would be a little too expensive, or the forgetful moment that would cost me the last year of work. I didn’t want to return to school and say it didn’t work out; I wanted to come back a champion, successful and living my childhood dream. I wanted all of these things so badly that it scared me. I should have known then that my thinking was all wrong. But I didn’t, I was high on the hope that this was my big break, and I was ready to kick myself into high gear.

The first three shows gave me more success than I have had in my entire riding career. I finished 2nd/12, 4th/32 and 12th/88 (3rd YR) at the preliminary and CIC1* level, around some of the biggest tracks myself and my horse had ever seen. I hardly recognized these accomplishments, because everything for me was about the 1* at the end of the trip. All these shows were just the lead up to Ocala, just preparation for when it was going to really count. I had everything planned to the T and it went all the way down to the drive home, where I hoped I would be sleeping with the excitement of qualifying; I hoped I hoped I hoped.

I had been chasing NAJYRC for the past five years, across different horses and ponies. I held the Junior Olympics of Eventing on a pedestal that was untouchable. To me, this was more than a goal. Making the YR team would be the door a new chapter in my life. Even more specifically, it was important to me to run the 1*, and the link to that article is here. Tini felt exceptional leading up to the Fork, but from there things didn’t go as planned.

After show jumping at the Fork, Tini suffered some mild health complications that rolled over to Ocala the following week, despite all prayers and actions on behalf of myself and a team of vets. Nothing occurred that was detrimental to her wellbeing, but she needed some time to rest before competing at a high level again. Nevertheless, I was devastated when the vets broke the news to me. I was assured my horse was OK and would be okay, but needed more time to recuperate before running a big track. Never did I consider going against this advice, not in a million years. But it still shattered me. I wanted that 1* completion so bad it hurt. I had wanted it for so long it felt like the world was crashing down.

I can still vividly remember my head spinning. I didn’t believe it, I had done everything right and more, what went wrong? I knew it wasn’t my fault, but it felt like it was. Surely this was a nightmare? I would wake up in a few minutes, sweating and anxious. I had put so much pressure on myself for this weekend, and I knew I shouldn’t have. My reaction was a consequence of immense and unnecessary pressure I inflicted on myself. I wanted to convince myself it wasn’t real. But it was real, and it hurt.

I won’t try to glorify this, I was an absolute wreck. I sobbed for at least an hour, wallowing in the deep regret I had about the whole ordeal. I regretted rushing through the first three shows. I regretted putting one show on the line for five years. I regretted rushing past everything, because I had wasted all celebration on focusing on the next thing. I never rejoiced or was consumed in happiness. I was always proud of Tini, but never of myself. Then when everything fell down, it didn’t seem like enough. It felt like I wasted all my energy on something that turned out to not be the ultimate.

I cried because I was exhausted in every way possible, I cried because I felt stupid, and I cried because I was crying. I didn’t want to be upset. I wanted to gracefully accept this and go on with my weekend duties, high on the success I had had thus far. But I wasn’t, and that stung even more. I had literally spent a third of my life on this idea of going to Young Riders, representing Area VII, and posing for a beaming photo with my comrades. That was all I wanted. I wanted so so so badly for it to work out. I wished it wouldn’t fall apart, and when it did I was crushed. It feels petty, but at same time it isn’t. It’s real.

After accepting defeat, I continued the weekend at Ocala grooming my coach’s horses and supporting my friend. I had little time to contemplate between shining, icing, wrapping and walking, but I did allow my thoughts to wander to these conclusions.

Each year, thousands of hearts are broken like mine was. Sometimes a partner is lost, a dream is whisked away, a career is rerouted, or an accident happens. Each year these people are unspoken for. The ones that go home and sob into their pillow, wondering where it went wrong, how it happened and why them. People ask why they built it up to be so much. They wonder if it was worth it. They evaluate the risks and decide if they have regrets.

I know I do. If I were to do it again, I wouldn’t change a thing, except where I spent my time. I would have laughed a little harder, smiled a little wider, stayed a little longer, gushed more passionately and celebrated more enthusiastically. I really believe Ocala wouldn’t have been so disappointing if I had allowed myself to see the success in the previous events.

Life cannot be all about the next milestone, stop, step, or goal. It can’t consist solely of goals and their coming to fruition. Life is about ups and downs and how we deal with them. The biggest thing I learned on my trip, is that life isn’t worth living by a calendar. Life is meant to be loved, appreciated, experienced, acknowledged, celebrated and enjoyed. We are not meant to rush through one thing to the next, checking life events off like a grocery list.

I had to come to terms with myself while I was gone. I am only 15 years old. I have experienced so much, and yet so little. I am learning more about myself and my life every day, and that’s OK. I am not perfect, I have always known that. But what I did have to learn was eventually everything falls down. Everything will come to an end, and its only worth enduring if you enjoyed the process. Eventing is known as the highest of highs and the lowest of lows, but I think it is better described as the sport of journeys over destinations. In the same way climbing Everest is about the descent rather than the peak, eventing is the process over the result.

It was brutal to learn this after pining after a dream for so long. But in a way, I believe I wasn’t meant to compete at Young Riders this year. I needed to understand that one show can’t be the end all be all, and I am so glad I learned that now. John Green got it totally right — you don’t stop suffering when things fall down until you stop wishing they won’t.

On April 15th, I sat quietly in the passenger seat of the same Ram I drove down in. I looked out the window, processing the version of myself I was leaving behind. I drove home with a spunky mare, a trailer full of clothes, a heart full of the same dreams, and a new outlook on life. I have realized I love Tini more than words can describe, and no matter what happens she will always be the most important thing in the scheme of my dreams. I am very thankful and blessed to have an amazing coach, supportive and understanding parents, and friends that are always by my side as I grow as a person and a rider. It takes a village to help realize a dream, and I’ve got the best one around.

We both survived to fight another day, and will be back out soon. I have only been riding Tini a year, and I am so proud of where we are today. Life is truly about the journey, and I thought John Green said it perfectly when he said: “We need never be hopeless because we can never be irreparably broken.”

Hug your horses young riders, adult amateurs and pros alike. We need never to be hopeless in the face of defeat because none of us can be irreparably broken as long as our eyes meet our horse’s, our hearts burst with dreams and our heads live in the moment. Sometimes defeat is the greater success in the learning process of life.