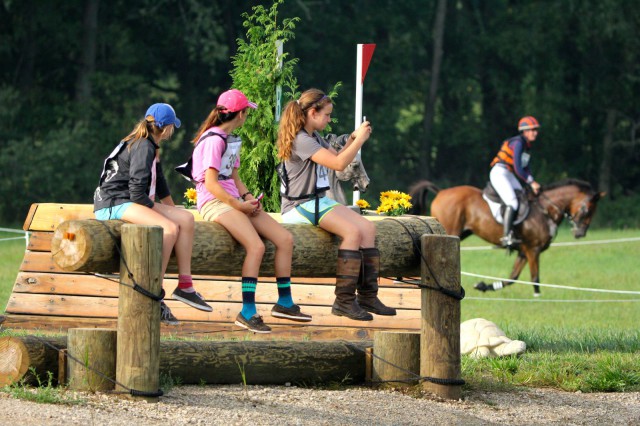 When comparing the start list at a national recognized event to the start list for the Olympics, it’s impossible not to notice that these two lists are very different in one noticeable way. Where you might assume that the international riders are somewhat representative of the demographics through which they rose up in their respective nations, the truth is there’s one demographic much more represented at the world class level than it is at home: men.

Take Millbrook Horse Trials start list from earlier this month, for example. The vast majority of starters are women. In the Advanced division at Millbrook, there were 45 starts. Thirty-three starts were ridden by women, and 12 starts were ridden by men (I say starts because there was less riders than starters, as one person could ride multiple horses.)

In contrast, of the 65 competitors in eventing at the Rio Olympics, 23 starts were by women, and 42 were by men. One woman (Rebecca Howard of Canada) made the top ten. When comparing start lists from England and France, the numbers are comparable (though slightly higher for men in France). So it would seem that somewhere between the Advanced division of a large national event and the world class riders, the nations who can front teams or individuals in eventing are failing to capitalize on all the available female talent.

There’s one more aspect of the start list at Millbrook that’s worth pondering. As mentioned earlier, we chose to count starts, rather than riders. When you do the opposite, something interesting emerges. While in the Advanced division there seem to be a relatively equal number of men and women with multiple rides, if you compare all the divisions, the number of men with multiple rides goes through the roof. (Buck Davidson rode nine horses at this event alone!) When you also consider that this excludes multiple-ride heavy hitters Boyd Martin and Phillip Dutton (who were in Rio), it’s even more stark. Does ten rides a day automatically transfer to more opportunities to accelerate upward? Statistically, it makes some sense, but we all know it’s more complicated than that.

This is in no way a scientific comparison; there’s a lot of variables we can’t control for, and a larger swath of data is needed to get into the real nitty gritty of what’s going on across many nations. But is there something to be said for men having multiple rides at multiple levels? Is it a thriving business model that women have a harder time emulating in our current social structure? Or is it an irrelevant factor to the larger game, and other complexities are at play?

Interestingly, world class dressage does not seem to have this problem. Of the 60 starters at the Rio Olympics, 40 were women, and 20 were men. In the top ten of the Grand Prix Special, 7 were women, including the three medalists. While you might say it’s biased in the opposite direction, I would argue that it’s much more representative (though, honestly, still probably a bit generously skewed to men) of the demographics of those competing at the lower levels. I looked at two or three start lists for regional dressage shows in the past month, and for example a recognized show here in my home state of Utah, with classes for Training to Grand Prix, attracted 134 test starts, of which only 14 were by men.

The good news? Eventing has much less of a problem with the world class gender gap than show jumping. While it’s true that more men compete in show jumping on average than in eventing or dressage, The numbers at the top of the sport are a bit rattling. Of the 75 riders who competed in show jumping at the Rio Olympics, only 12 were women. Two women (Edwina Tops-Alexander (AUS) and Luciana Diniz (POR)) made the top ten. To America’s credit, our show jumping team was evenly split men and women, and it produced a silver medal.

The intention is not to point fingers, detract from the male talent our sport possesses, or stomp our feet and demand equality. Merely the intention is to shed light on the data and start to ask meaningful questions about how to ensure that talent is never overlooked, and buoy our world class riders with every available resource. Maybe an equally important question is how to encourage more young men to become interested in the sport at the lower levels.

In truth, women have come a remarkably long way in a sport that barred their participation at the world class level until the 1950s. In a little more than a half a century women have helped push each of the disciplines to new heights, and they’ll continue to do so alongside their male counterparts in the years to come. A little honest reflection of the facts is how we got here in the first place, so let’s not stop now.

The data on gender and final results at the Rio Olympics is compiled from this document: Rio 2016 Results Book