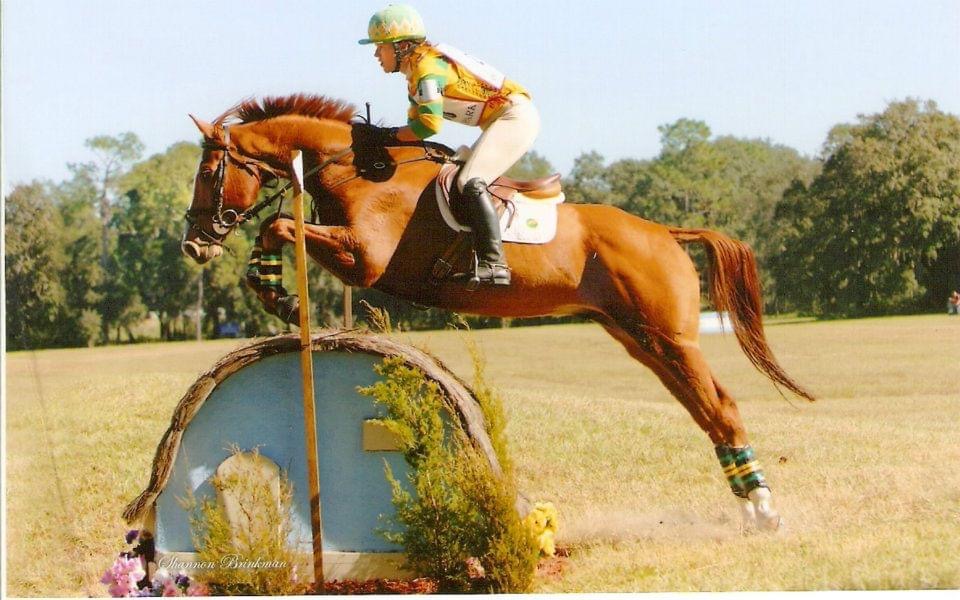 When Megan Moore first brought Widespread Panic home from the racetrack, everyone at her barn thought she was crazy. Widespread Panic, barn name “Nemo”, was a bit (just a bit) of an ugly duckling.

Megan reminisces on that fateful day. “He looked like a baby Saddlebred. He had this enormous blaze on his face and he was in the middle of a growth spurt, so his head was much, much bigger than the rest of his body. And he was very awkward looking. When he arrived from the track, all the girls looked at me like, ‘What did you do?'”

But despite his ugly duckling appearance and “typewriter-esque trot”, Megan knew she had a special horse on her hands because of his kind eyes. “I just loved him from the minute I saw him because he’s just a kind, sweet horse and he never has a cross word for anybody,” she described. “So even though he was at a growth spurt where there were a lot of legs going a lot of different ways and his head was too big for his body, he just had that way about him. He was just a kind horse.” 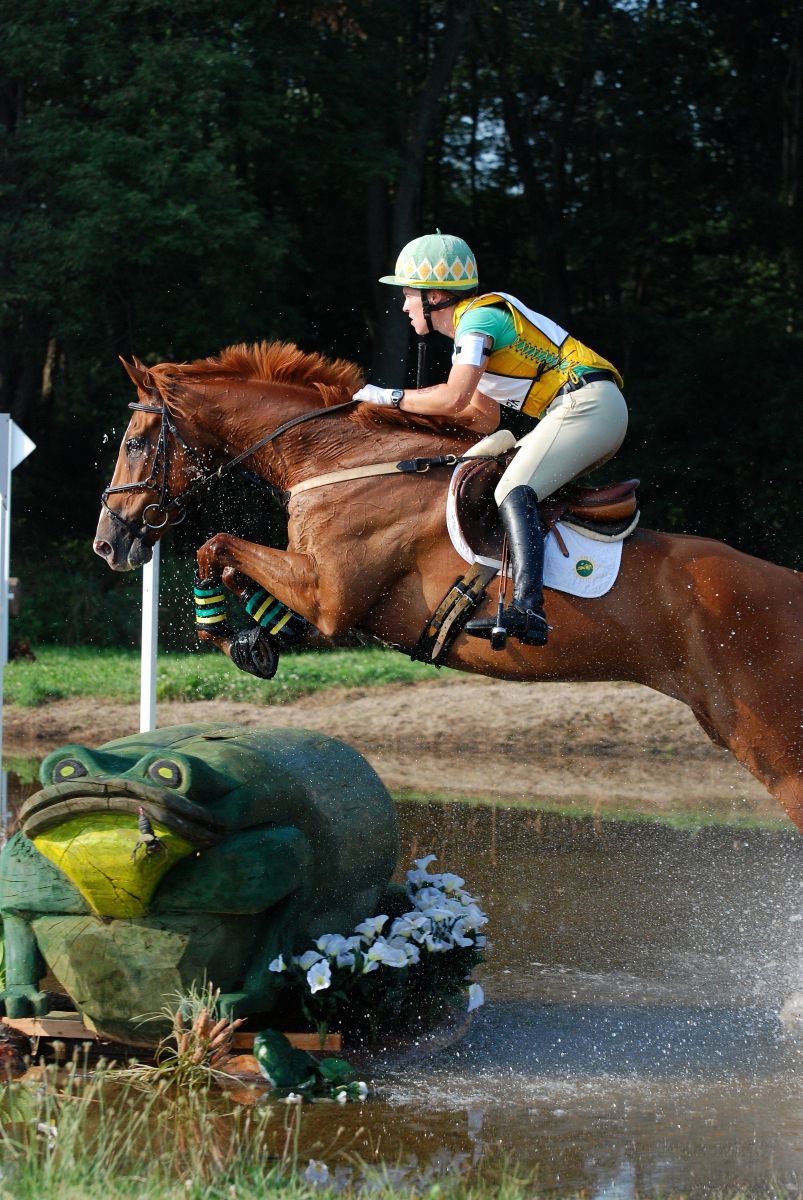 It was a long road to success with Nemo. When he first came to Megan, he was what she calls ‘a big wimp and a big sweetheart’. He was the lowest horse in the pecking order in the pasture and Megan discovered he was aptly named, as he was the type to “look at you as though the world had just blown up.” Generally, he was a baby horse without any confidence who tended to get a little stressed.

But Megan’s trust in his kind eye paid off. As this ugly duckling grew up, he became a cross country machine. Nemo went on to be named to the USEF Developing Rider List, helped Megan earn her USDF Bronze Medal, and evented through the Advanced and then-3* level, winning more events than Megan can count.

“By the time he was stronger as an upper level horse, he had the best trot,” Megan recalls. “He won more Intermediates than I can count in his career and got really good dressage scores. But it was all just because he wanted to learn, he wanted to do it for you.”

At the age of 21 years young, Nemo is still happy to be out and showing at the top levels of dressage. Having been competing for 18 years straight, he’s now at a pure dressage barn where he is still sound, glowing, and ready to get out in the ring and win. Nemo is now partnered with Julia Magsam, and the pair just won their own USDF Bronze medal last month — Nemo’s second Bronze Medal-winning ride.

An 18-year competition career is long for any horse, but particularly for an off-the-track Thoroughbred. Nemo, however, beats all the odds. Megan credits his soundness and beautiful condition to the hard work put in by Julia and her team to keep him healthy and happy, as well as the excellent team of vets and farriers he had while he was with Megan. “Fortunately, Nemo is a very sane horse. He always allowed us to do every every bit of icing and wrapping and every bit of care you could possibly give a horse.” 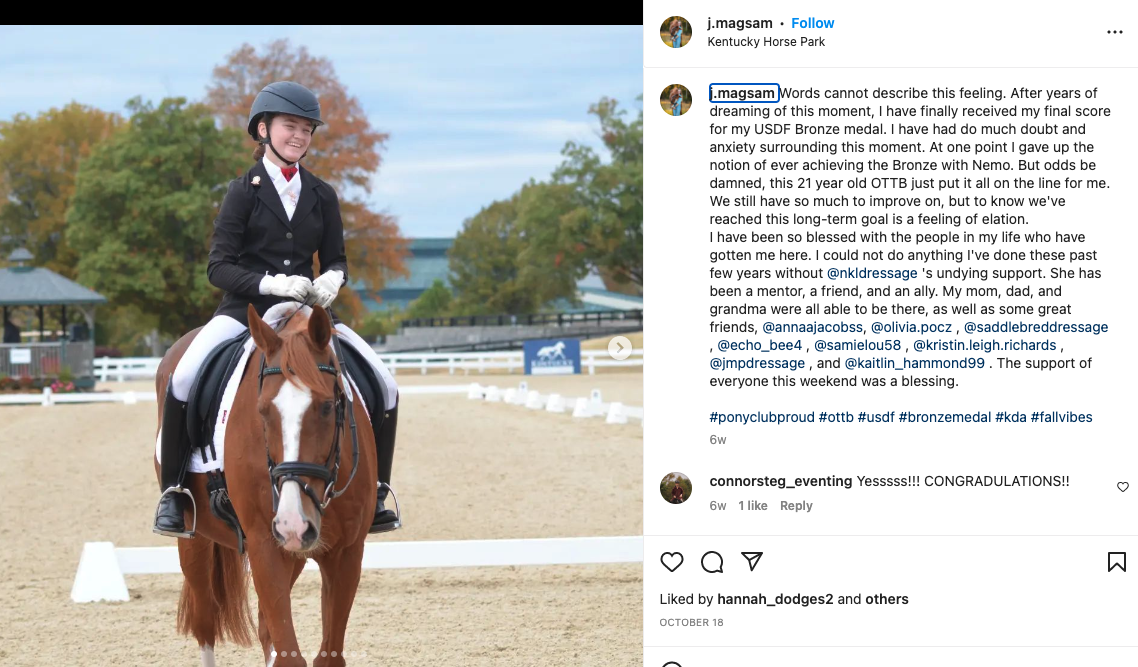 Megan says Nemo is not the type of horse to retire and move to Florida with the rest of the snowbirds. This horse is here to stay. “He wants you to touch him every day and he wants you to work with him and he wants to be ridden. He doesn’t want to be chucked out in the field and retired.”

Next time you see Widespread Panic out and about at a horse show, take a moment to stop and watch. This horse is truly one-in-a-million, both for his growing list of achievements and his willing and kind attitude.

A long career (and, more importantly, a long and healthy life) is always a goal for our horses. Ask your veterinarian about Zoetis’ line-up of health support options that can help support your horse for a long-lasting and comfortable career and life.