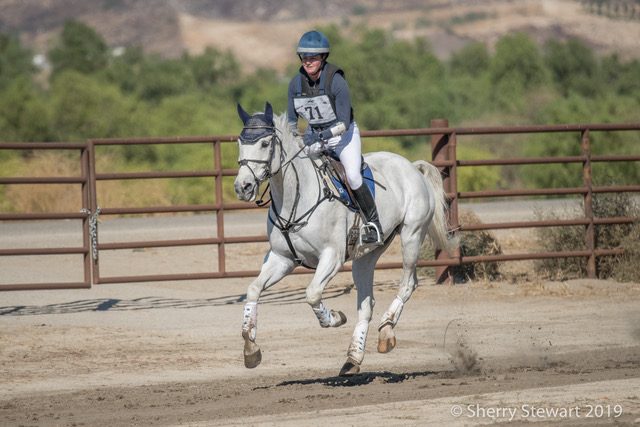 Whitney Tucker Billeter and Bill’s Midnight Magic held their lead in the Hylofit USEA Classic Series Training Three Day today at the Galway Downs International. It was the 15-year-old Hanoverian’s first Training Three Day and he “was awesome,” said Billeter.

Of the cross-country track that concluded the full endurance day’s four phases, Billeter said the horse’s ample experience in other divisions left her not overly worried about anything except “getting my lines right to everything.” That she did, moving onto Saturday’s show jumping conclusion, when she’ll have to leave all the rails up to nail down the win. 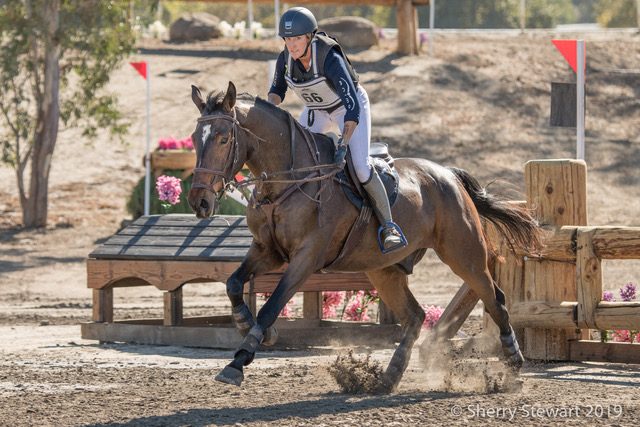 Those in closest pursuit of the win changed slightly. Canadian pair Jennifer Miller and the 13-year-old Dutch Warmblood Bon Bon sit second on a 28.30. Australia’s Rebecca Braitling and Galwaybay Merbantos, a 7-year-old Irish Sporthorse, also incurred no penalties to move into third on their 28.90 dressage score. Lauren Billys, who rides for Puerto Rico, and the 6-year-old Dutch Warmblood Twilight 54 are very close behind on thier 29.00

Brailting and Billys are both big fans of the Classic format for its ability to prepare and test horses’ readiness for the higher levels.

Brailting said she was right to predict that the T3D format would benefit Galwaybay Merbantos. “Today he was the fastest he’s ever been around cross-country and also the most relaxed. He’s a horse that we think will go up the levels and this format teaches him how to really move across the ground, to recover, and go out again the next day.” 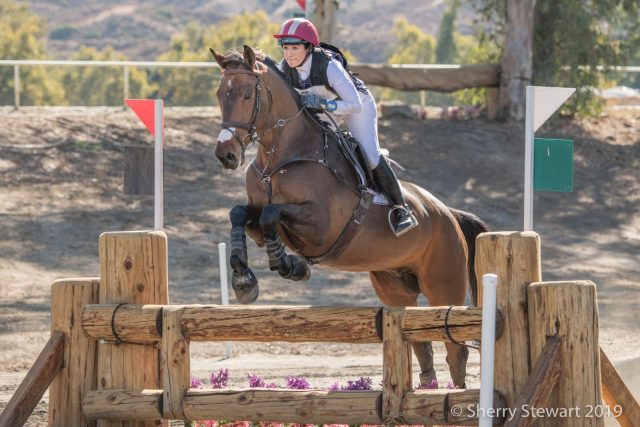 Billys recalled competing in her first T3D 13 years ago and she has since entered every horse possible in the division. Today’s partner arrived with the help of the Twilight 54 Syndicate in March, and he came straight from the show jumping world.

“The T3D is so educational for him because cross-country is the phase he has the least experience with,” Billys said. “Doing the steeplechase, touring the grounds, he was definitely more focused on cross-country and I could feel his confidence building as he went around. Which is the whole reason we did it.” She’s experienced the same benefits in all the horses she has run in the division. Among other things, “It tells me if they have the gallop,” she explained. “Do they have it, can they sustain it over the distance and do they need to improve it?”

“He may be the best moving horse I’ve ever sat on,” the 2016 Olympian continued of her newest horse. ‘He’s incredibly athletic and super well balanced. Even though he’s a big horse (17 HH at last check), he doesn’t ride like one.”

Billys anticipates Saturday’s show jumping will be another educational lesson. Even though “Ned” came from the jumping world, “He’s changed a lot since I got him. The goal tomorrow is to gain a better partnership with him and see how he responds after today’s work.”

Stunner Sets the Pace after 2* Dressage 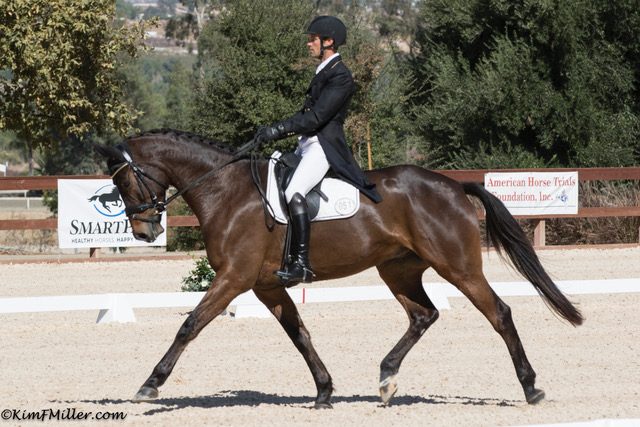 The day dawned in the 30s and hit the 80s before the 46-horse 2* field was finished. David Kos and the 6-year-old Hanoverian Stunner led the day on a 25.80. Junior rider Jordan Crabo and veteran eventer Over Easy, the 13-year-old Swedish Warmblood mare, are second on a 27.70. Olivia Loiacono-Putrino and the 8-year-old German Sporthorse Under the Spotlight are third, barely behind them on a 27.90. 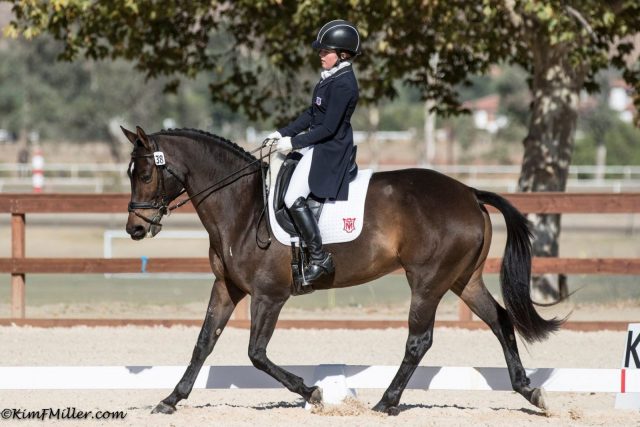 Jordan Crabo and Over Easy. Photo by Kim Miller.

The standings through #10 are tight, so anything can happen over the weekend. Saturday, they tackle a track designed by Canada’s Jay Hambly and Galway Downs builder Bert Wood, then Sunday it’s show jumping in the Grand Prix Arena on a course designed by Marc Donovan and assistant Kelly James, both of the USA. 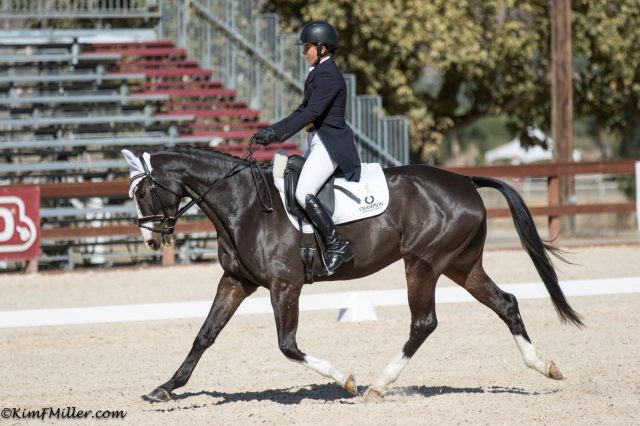 Olivia Loiacono-Putrino and Under the Spotlight. Photo by Kim Miller.

The Galway Downs Equestrian Center is located in the heart of Southern California’s Temecula Wine Country. There, beautiful but wild weather provided a good test for new show horse housing: Clayton Frederick’s FEI-Stabling. Exhibitors were grateful the ClearSpan covered barns withstood strong winds Wednesday and Thursday, then provided shade from Friday’s searing sun and plenty of circulation. The larger stalls are a hit with horses and their keepers and received rave views as the latest of ongoing upgrades to the competition facilities on the 240-acre property. 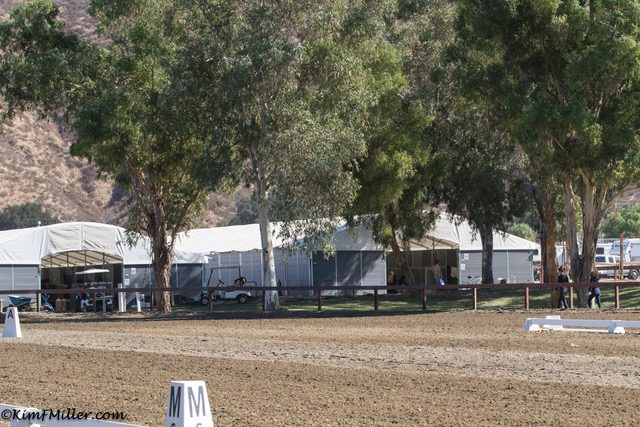 Saturday’s FEI cross-country action will be enhanced with live music, local craft beers and adult beverages from Galway Spirts Distillery, enjoyed from on-course, tented oasis spots. The first 3* rider leaves the start box 10:05, 4* follows at 11:05 and 2* at 11:50. National division show jumping plays out all day, and the Training Three Day wraps up with stadium jumping in the late afternoon.