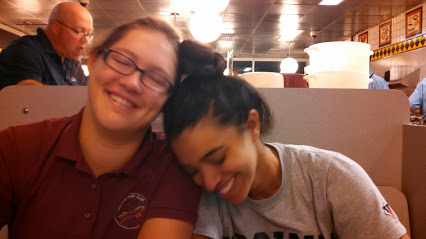 My daughter and Kiri, at Waffle House the morning of the rally. Photo by me.

In 2010, I took my young daughter to the World Equestrian Games in Lexington, Kentucky. We had a wonderful time. Two years later, the two of us made a grand trip to the London Olympics, where we got to watch all four days of eventing. It was the trip of a lifetime.

For a long time I planned to go to the 2014 WEG, which are currently still in progress in Normandy, France. I wouldn’t have been able to take my daughter, now a high school junior, but I had several friends going, I have a working knowledge of French, and I love Normandy. I would, I thought, have my own adventure.

As the months went by, however, I began to have doubts. Planning for London was complex but went smoothly; everything about this trip seemed awkward. I didn’t get tickets for the dressage phase. Getting to Caen, the hub of the WEG, was easy but the train schedule meant I’d have to spend one whole day going from Caen back to Paris after the eventing was finished, then fly out the next day – hardly a horrible option, but it meant that a trip to see two days of competition would take at least six days away from home. So I asked my friend, a Very Big Name Eventer, for her opinion: was it worth it?

“Here’s what I think,” she said. “You’re only going to get so many chances to go to something like this in your lifetime. Take them.”

That was great advice, but it swayed me the opposite direction. Because the biggest obstacle to my attending the WEG was actually the Old Dominion Region pony club event rally, held in conjunction with the Virginia Starter Trials in Lexington, VA. If I went to the WEG, I’d miss the rally.

I’m 47. My daughter is 16. If I have another hale 35 years, God willing, I will get my chances at eight more WEGs and eight more Olympic games. Since my daughter has declared her intention to go to college as far as possible from Tennessee (I’m not offended: I went as far east from Indiana as I could), I very much doubt she’ll rally once she’s in college. If she does, it won’t be over Labor Day weekend. And she loves eventing rally. If I’d gone to the WEG, she still would have gone to rally, but I wouldn’t have been there to see it.

Then there’s the rest of the team. Some of our club’s experienced eventers have family members who also compete, and so they headed to a recognized event instead. That left me, as DC, in charge of a fairly inexperienced team. Our stable manager, Caroline, is a bright and competent young woman, but also a D2 who’d never been to a rally before. 13-year-old Halie, doing a combined test, comes from pony hunters and had never done dressage.

And Kiri. Kiri is 18, just starting college. She’d been in pony club four years, owned her horse Spencer for four years, gone as stable manager to several rallies but never once ridden in them. Never evented. Rarely attended local shows. Boards with our joint-DC at a farm with no cross country. Four years ago, at camp, Kiri and Spence could barely trot down a hill; neither had ever encountered hills before. Watching them move up, and learn, and get their C1 and then their C2 over the jumps on my farm has been inspiring to me, and I wanted very much for Kiri to have this one event, this one rally. I once read an article by Denny Emerson that said, “Eventing is the only sport in the world where you can finish 35th and be unable to sleep that night for sheer, transcendent joy.”

Kiri had worked so hard. She had done so well. I wanted her to gallop across the cross-country finish line and feel that joy born of effort and hard work, unlike anything else. That feeling would stay with her always.

And finally, my daughter. Some day I’ll go to the WEG, maybe even the Olympics, without her. But not yet. This year I went to the pony club rally, while I still had time.