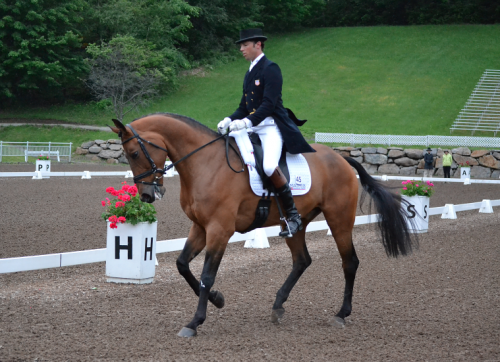 Will Coleman and Obos O'Reilly are in second place on a 50.2.

Will Coleman and Obos O’Reilly couldn’t quite catch leaders Lauren Kieffer and Veronica, but they put in a very fluid test to move into second place on a 50.2 in the CCI3* at Bromont at the conclusion of the dressage. Obos O’Reilly took a couple trot steps in the medium walk, showing a brief moment of tenseness, but overall I thought this was a really solid performance. Will did seem a bit disappointed when he left the ring, but he’s put himself within good striking distance for the cross country tomorrow. Selena O’Hanlon and Bellaney Rock were the final pair to go today, scoring a 57.1 to move into sixth place. The horse looked very responsive and obedient throughout the test, giving Selena the best ride of the three mounts she has in the CCI3*. 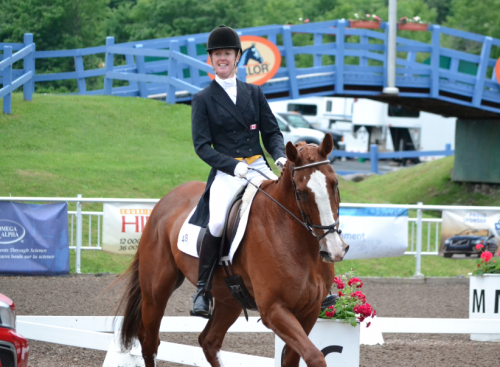 Selena O'Hanlon and Bellany Rock are in sixth place on a 57.1.

Lizzie Snow and Coal Creek were the first to ride in the final group of riders to go in the CCI3*, and they scored a 57.9 to move into seventh place. This was a very workmanlike performance, and Lizzie looked very happy she she left the ring. Leslie Chelstrom and Cecelia are sitting just behind Lizzie and Coal Creek in eighth place on a 58.7. I know this wasn’t the test Leslie was hoping for, as this mare can be really fantastic in the dressage. Unfortunately, Cecelia was showing some uncharacteristic tension throughout the test, jigging during the medium walk and not looking super settled. She swapped leads during the last pass at the counter canter; it was a beautiful change, for what it’s worth. Darren Chiacchia and Amendment 15 unfortunately picked up an error when he forgot the halt and rein back; they are sitting in 21st place on a 66.4. 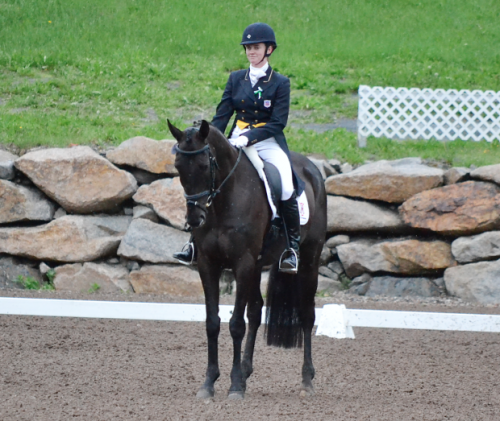 Lizzie Snow and Coal Creek are in seventh place on a 57.9.

The top three at the conclusion of the CCI3* dressage are Lauren Keiffer and Veronica on a 44.6, Will Coleman and Obos O’Reilly on a 50.2, and Emily Beshear and River King on a 53.5. Unfortunately, the internet connection in the press tent has continued to deteriorate throughout the day. I have a video slowly uploading of Will Coleman and Obos O’Reilly’s test, and I also have video to upload of Leslie Chelstrom and Cecelia. Be sure to check back for those later in the day. We’re heading into the start of the CIC3* dressage now, with Sally Cousins and Westerly kicking things off at 2:07 p.m. The rain is starting to fall steadier now, making for truly miserable, cold conditions. Supposedly it was 90 degrees here in Quebec just a few days ago; I’m not sure I believe that at this point. Stay tuned for a full report from the CIC3* dressage. Go Bromont. 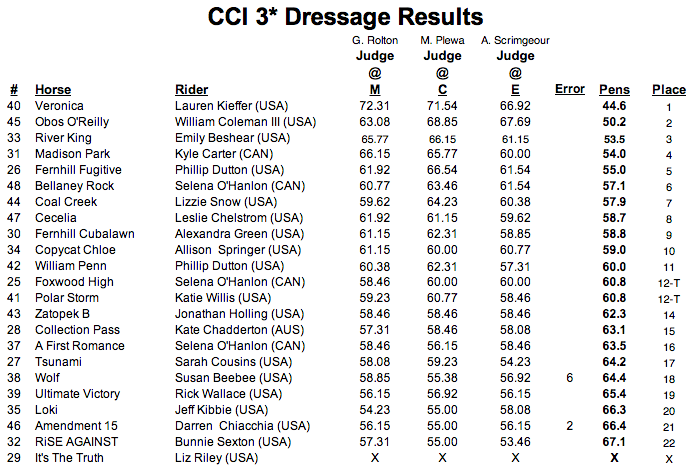