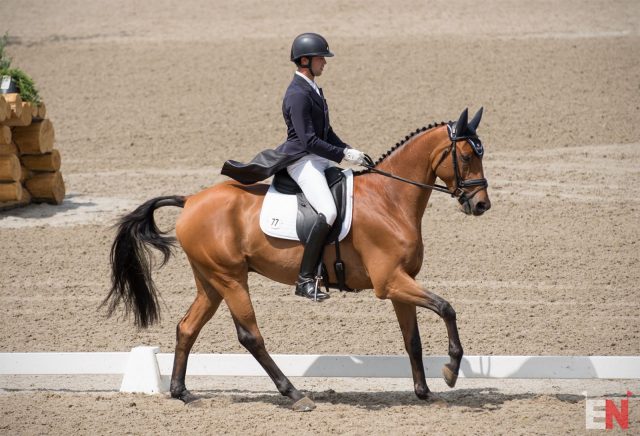 Will Coleman and TKS Cooley. Photo by Leslie Threlkeld.

As the penultimate pair to head down centerline in the MARS Incorporated Bromont Three Day Event, Will Coleman and TKS Cooley (Vivaldo Van Het Costersveld X Badgerhill Cruise, Cruising) threw down a 31.7 to take over the CCI2* lead.

“We were aiming for right around 30,” Will said. “He has a lot of quality and I think really highly of the horse … He’s got miles to go but he’s got a lot of the right ingredients and now it’s up to me to produce him.”

Will said “Tommy,” an 8-year-old Irish Sport Horse owned by the TKS Cooley Syndicate, is capable but green, having undergone colic surgery that set him back some months. He completed two CIC2* events this spring and is making his CCI2* debut this week.

“It’s nice to be in a good position heading into Saturday, but he’s young and this whole event is going to be about his development. We’d love to win but we really have the future in mind with him. We’ll go out there and be competitive and try to give him a good go, but we’re really excited about this one for down the road.” 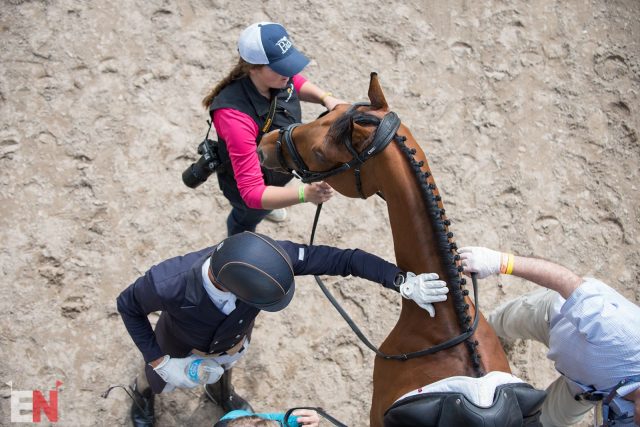 Will has been jet setting between the U.S. and the U.K. as he prepares OBOS O’Reilly for Tattersalls CCI3* and he said it’s been a challenge having only sporadic rides on the young horses. Will’s wife, Katie, and their staff have been keeping the horses going at home when Will is overseas. “It’s a team effort” that’s paying off.

Will and Tommy will have little room to spare going into cross country, and Derek di Grazia’s courses here at Bromont are always a good challenge.

“(Bromont) is a really special place for developing your horses. I know it is a challenging course and this horse is a bit green, but they grow up a lot from doing something like this,” Will said. “It’s a real test. If you really want to take a horse potentially to a four-star one day they’ve got to see a test at every level. I think you get that here. That’s why we come.” 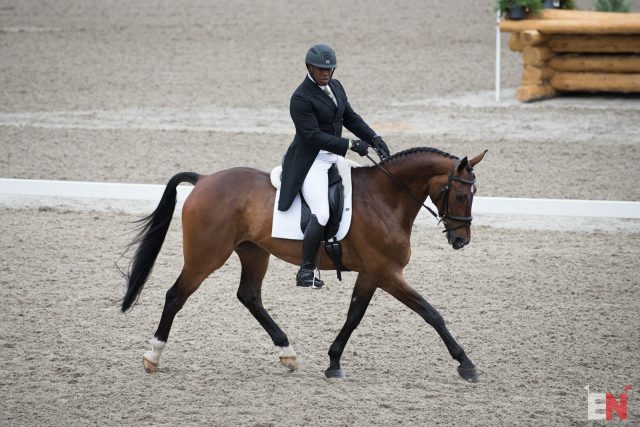 Only two points separate the top ten CCI2* combinations, and the remaining division scores are incredibly close. With such little separation, time will be a huge factor on Saturday’s cross country. 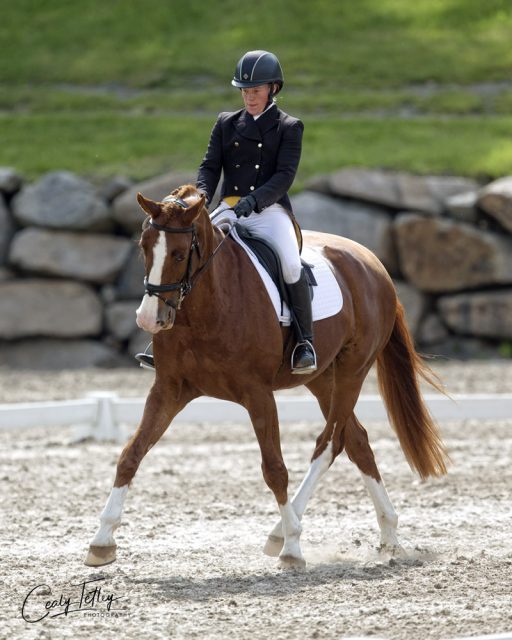 Arden Wildasin and Watch Out. Photo by Cealy Tetley.

The leaders changed throughout the day in the highly competitive, 44-horse CCI* division, and the top eight all scored under 30. Arden Wildasin and Watch Out (Concorde X Henske P, Lorenz) were the first to go in the last group of the day. Whereas some horses couldn’t shake their tension through the wind gusts and waving flags, Arden and “Walter” thrived on the atmosphere. They earned a 26.8 to take over the lead.

“I never thought that I would be on top. I am very much surprised, but he’s a horse that always tries and always loves to perform,” Arden said of the 15-year-old Dutch Warmblood owned by her father, James Wildasin. “It’s always so much fun going into any ring with him because he’s a true partner.” 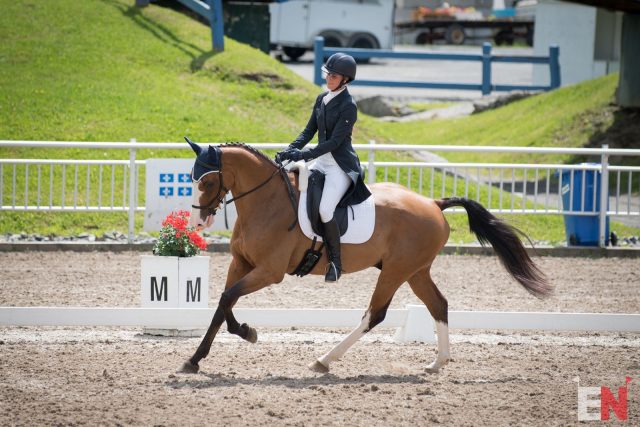 Arden has a strong partnership with Walter having ridden him since 2009. In fact, Bromont was their first competition together at Training level. They competed through the CIC2* level before Arden took a couple years off eventing and focused on dressage. During that time, she competed Prix St. Georges and went to the 2014 NAJYRC with Phillip Dutton’s 2012 London Olympic mount, Mystery Whisper.

Walter also spent some time in pure dressage, competing up to Third Level. When Arden returned to eventing, Walter came, too. “He’s always been a fantastic horse to do eventing. He’s always put the foot forward and told me what he wanted to do,” Arden said.

Bromont is on Arden’s calendar each year and she said it is worth the 13-hour drive. This year she brought a “string of chestnuts” with three CCI* entries. “This venue is fantastic for the horses. I’m so grateful to have the opportunity to come back every single year, and we’re very fortunate to have something like this.” 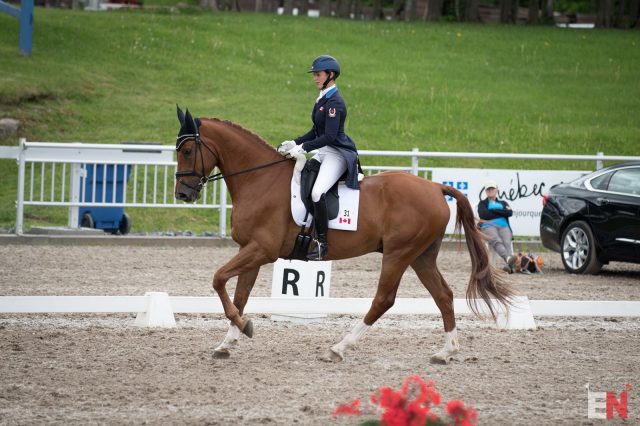 In second place after dressage is Annie Goodwin and her 8-year-old Dutch Warmblood Fedarman B (Eurocommerce Washington X Paulien B, Fedor) on 27.1.

Like the CCI2*, the scores in the CCI* are tightly bunched, with 10 points separating the top 30.

The CCI3* and CIC2* horses will hit the sandbox tomorrow. Stay tuned for more from Bromont! 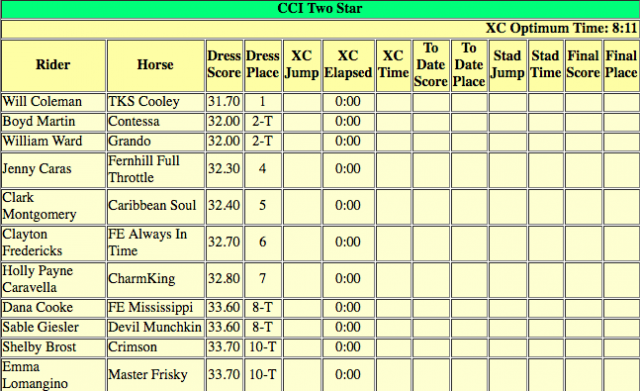 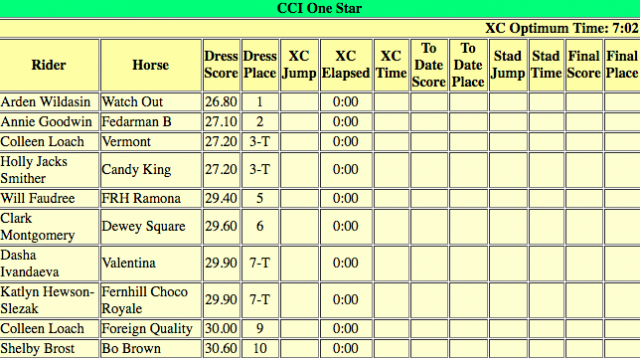