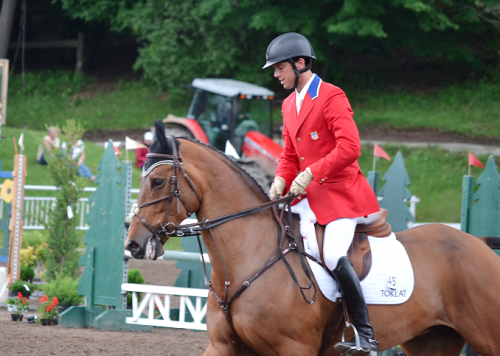 Will Coleman and Obos O'Reilly at Bromont. Photo by Jenni Autry.

Will Coleman announced this morning via his Facebook page that he’s withdrawing OBOS O’Reilly from Boekelo due to a minor injury. It’s another big blow to Team USA’s contingent at the major European events this fall, as Will Faudree withdrew Jennifer Mosing’s superstar mare Andromaque from Pau last week.

We’re relieved that Obos is only facing about a month of downtime after the injury, which occurred when he lost a shoe on cross country at Richland while running the Open Intermediate division. Obos, owned by the Four Star Eventing Group, won the CCI3* at Bromont in June and is absolutely a horse for the future. While it’s disappointing the horse won’t get the international experience this fall, we can rest assured knowing he’ll be back in the spring. Go Will!

“Unfortunately, it is with a heavy heart that I have had to withdraw OBOS O’Reilly from the U.S. Nations Cup trip to Boekelo CCI3*. He sustained a very minor injury at Richland Park after losing a shoe on cross country. The timing is horrible, obviously, but he will be fine. As I said, his injury is nothing serious, and though he will be sidelined for the next 30 to 45 days, we expect him to be completely ready to go next spring. Thanks to his wonderful syndicate for their support. We all understand that this is part of the deal and are thankful that it’s nothing more serious. I will miss that Boekelo trip though, but wish the U.S. the best of luck nonetheless.”