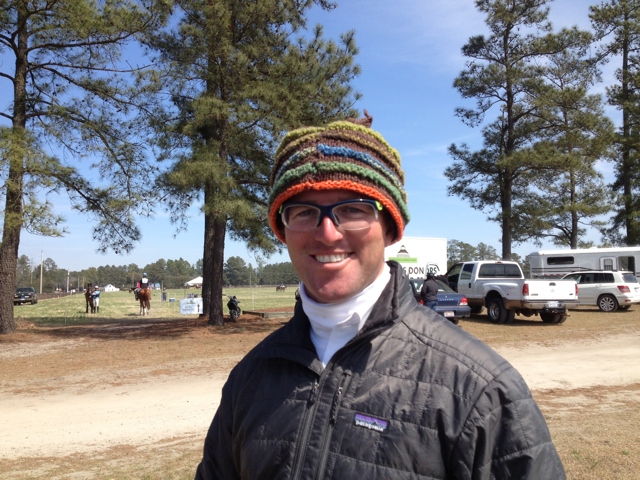 Will Faudree: Not only winning the dressage phase of the Southern Pines Gold Cup Adequan USEA PRO Tour Series, but the Style Stakes too

There was no change at the top of the leaderboard after the lunchbreak – Will Faudree and Missy, his lovely mare Andromaque who belongs to Jennifer Mosing, like his three other rides here at Southern Pines, retained their lead from Emily Beshear and Here’s To You, and Will also kept third place with Pawlow.  Call me soppy but my heart melts every time I see Will and Missy trotting around together, him with a big grin on his face, unless he’s really concentrating, her with her ears pricked and always concentrating, and whenever I ask him how he is when he’s riding her he unfailingly replies that he’s wonderful, or fabulous, or the luckiest person in the world.  About his test today he elaborated, “I was very happy with her; she’s like going to work withe Meryl Streep in the Devil Wears Prada every time I get on her, she’s all business and I’ve got a great partnership with her. I did ride her once early this morning, mainly because it was so cold – I just wanted to get them out of the trailer and move them around, and then we put lots of coolers on them and gave them about an hour to themselves, and then when I warmed her up she felt really good so I didn’t do a whole lot, and she went in and put in a really business-like test. I’ve been working a lot with Sandy Phillips and recently it’s been hard to get her over, so between that and I’ve had awesome training sessions with David, it’s just been brilliant. I’ve got so much out of them, and he’s helped me so much with the quality of the work we do with her, she’s not one of the biggest moving horses and if I don’t work with her trot she becomes quite ordinary, she’s 15.3 and built a little downhill and we have to really work to build her uphill but I watched the video and I was really pleased with her frame throughout the whole test. If she doesn’t understand something, she tells me she doesn’t understand it and we ask her a different way and try to figure it out.”  You can see Andromaque’s video, courtesy of the Horsepesterer – thank you! – here.  Will also went on to say that while he adores Missy and it’s mutual, the other girls on the barn are not so smitten, “Jennifer jokes that when I get on Missy it’s like being on Cloud Nine and I get off her and I’m happy, but it’s funny because she’s not a warm, fuzzy mare – Nat V-C (barn manager) and Christina Curiale (travelling groom) do not get along with her at all, Missy does not like them. They tolerate each other, but I joke that there can only be one queen in the barn and it’s Missy!”

A chance meeting at a clinic where Will taught Jennifer Mosing’s two daughters Kaitlynn and Madeline blossomed into a friendship and business relationship. After Jennifer bought Pawlow, they found Andromaque in Ireland as a somewhat tricky two star horse and decided to take a chance on her, “Thank God we did! She reminds me a lot of Antigua in many ways. They’re built very similarly. She has a quieter brain than he did in the dressage but she’s a little bit stronger in my hand cross country. In the way they go and the way they move across the ground though, it’s cool.”  The plan is to apply for Saumur with Missy this Spring and then take her to Pau in the Autumn. Meanwhile, Ernie aka Pawlow is headed to Rolex, “He’s fourteen this year and I have a great partnership with him; I have a great partnership with all my horses and they’re all of course a bit different. I’ve had Ernie for a very long time, I bought him from Robyn Fisher through Amy Tryon. He always delivers; he’s not the fastest horse in the world so at the top level he’s always going to have time penalties – I can go as fast as I want but he’s an amazing horse in the sense that I never feel a loss of jumping ability from him, but I lose fifth gear at about 8 minutes, and then I lose fourth gear at about 9 minutes, and then at the last four star we did, at Luhmuhlen we sort of coasted home in third gear, I can kick as hard as I want, and he still jumps as well as ever, but he’s not going any faster! I’m just having fun on him, he’s a really fun CIC horse because I don’t ever lose fifth gear on him there, he’s fun in the dressage.”

The cross country course at Southern Pines is designed this year by Hugh Lochore and Will is one of several riders I spoke to who was full of praise for it this year, “It’s really good. They’ve changed the flow of the track; I think it’s a bit more gallop-y than it has been in the past and it looks really good, they do a good job. You can’t control the weather, it felt like 12 degrees this morning, but I love that these competitions are changing the course designers every three or four years because I think it’s good to have a fresh look and feel, I think it’s good that we get to see different courses and ideas. It’s never fun to go to the same event over and over again and think, ‘here we go again!’ I think Hugh’s done a great job this weekend, there’s definitely plenty to do out there. I’m not going to be blasting any of them really fast around, it’s early in the season, I want to build on what my goals are this Spring.” Will also has DHI Colour Candy in the Advanced and Riesling De Buissy in the Open Intermediate. 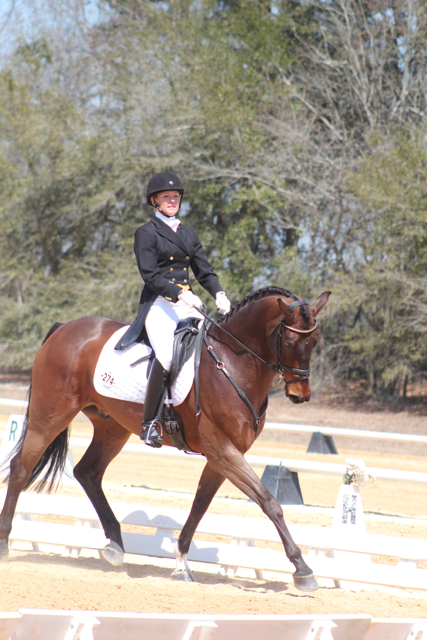 Susan Beebee was one of several riders to forget her test, but Wolf is such an extravagant mover and overall impressive horse, and there were some really lovely moments that Leslie Mintz and I who were watching together wondered if she might take the lead regardless.  Also worth mentioning is Becky Holder’s test on Can’t Fire Me; as expected it was a pleasure to watch, expertly ridden and just lacked a little bit of finesse that I’m sure Becky will work on between now and Rolex. With the frigid temperatures and with some horses still having only their first or second run I think we can expect to see some of the rust still being knocked off after the winter. 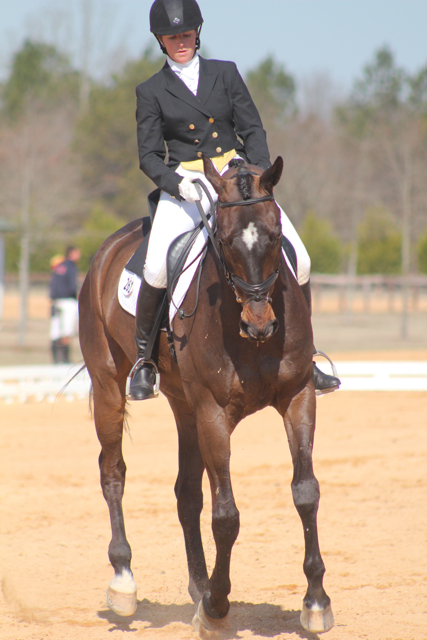 Erin Sylvester’s No Boundaries has been looking consistently good in all three phases this spring, and Erin also has some nice young horses coming up through the levels. 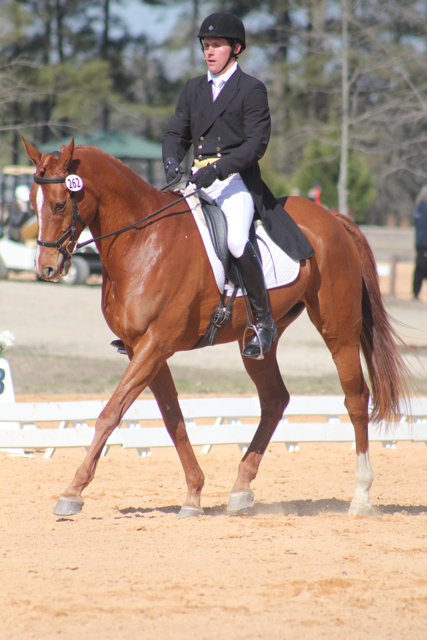 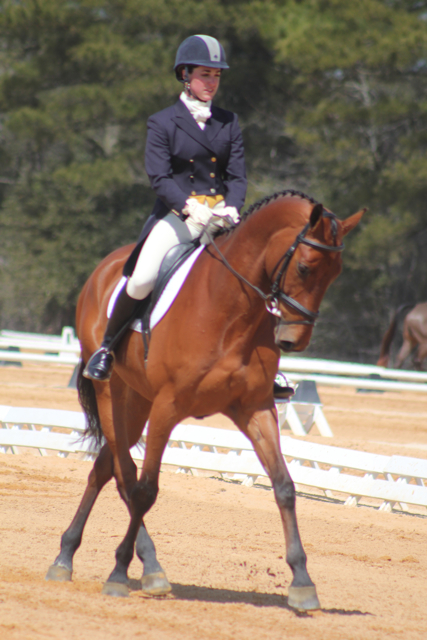 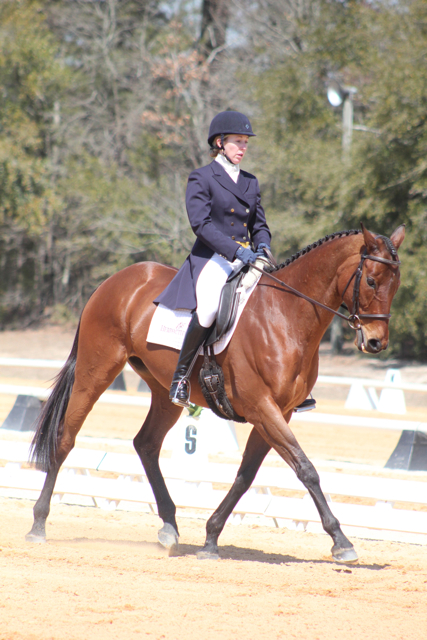 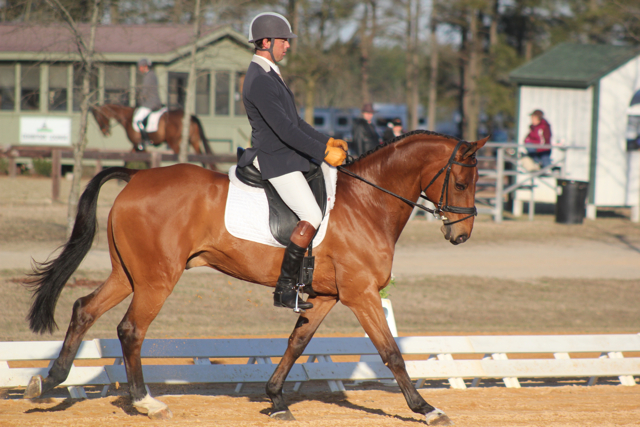 Will Coleman and Twizzel who lie in fourth place after dressage but who won’t go cross country – they galloped at home a couple of days ago, and Twizzel will run at The Fork before Kentucky. 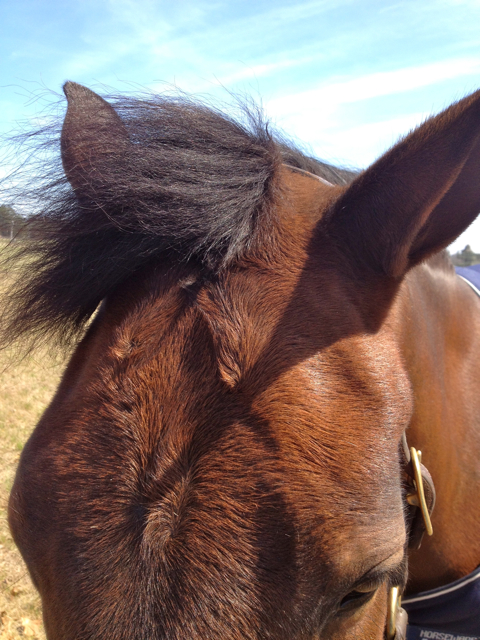 Check out Obos O’Reilly’s forehead, currently 7th in the OI division after dressage. They say more than one whorl is a sign of naughtiness (or is it luck?) but he has at least five! 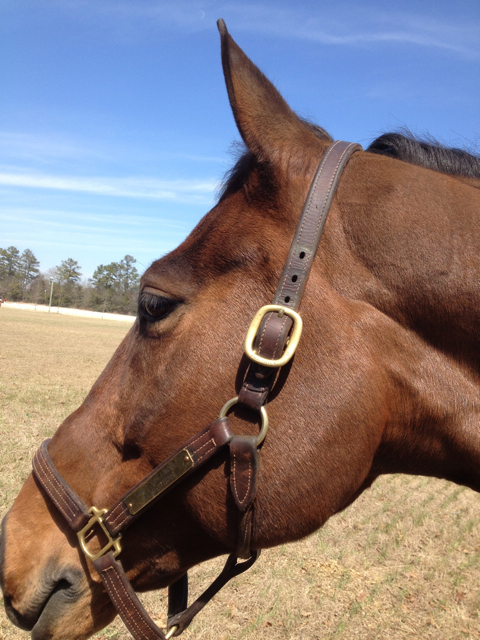 and yet he looks like butter wouldn’t melt in his mouth! 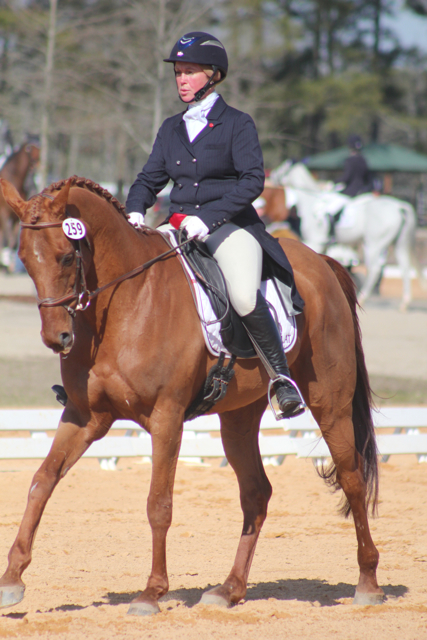 Colleen Rutledge looks so spiffy in all her new gear, and I am crossing my fingers that she gets to show it off in the main arena at Badminton in a few weeks time. At number eight on the waiting list her chances are awfully good, so if the weather, the EHV, and then all the normal horse things that could go wrong could just not, please, then she should be fine! 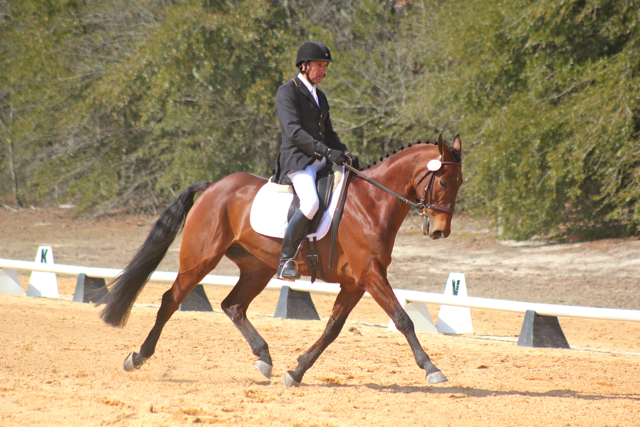 Finally, I hardly got to see any of the Intermediate or other divisions but luckily for me Dr Kevin Keane went quite late in the day on his own lovely Fernhill Flutter. Their first outing this year as Kevin has been working hard in Aiken all winter they proved that the time away from competing, and instead practicing dressage has not been wasted in the slightest by producing a blinder of a test. They lie in 3rd place in the OI division behind Phillip Dutton and Emily Beshear who tie for the lead.  Cross country starts at 8am Saturday morning, and although it is supposed to be even colder (how can that be possible) than Friday, everyone is praying that the rain holds off until Sunday, well, Monday would be even more ideal but there is a chance it may come much sooner. The volunteers and organisers at Southern Pines and the Carolina Horse Park could not have been more friendly or helpful, especially in such horrible conditions – once again we all thank you from the bottom of our hearts. Thank you for reading too, and Go Eventing!